I Regret Everything by Seth Greenland – Blog Tour and Book Review 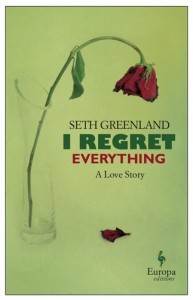 Life is an often-confusing mixture of heartache and hilarity, or so prove Seth Greenland’s appealing characters in this tenderly comedic story of modern love. Imbued with Greenland’s signature wit, I Regret Everything confronts the oceanic uncertainty of what it means to be young and alive.
Jeremy Best, a Manhattan-based trusts and estates lawyer, leads a second life as published poet Jinx Bell.  To his boss’s daughter, Spaulding Simonson, at 33 years old, Jeremy is already halfway to dead.  When Spaulding, an aspiring 19-year-old writer, discovers Mr. Best’s alter poetic ego, the two become bound by a devotion to poetry, and an awareness that time in this world is limited.  Their budding relationship offers them the possibility of enduring love, or the threat of tragic loss.

Seth Greenland is a novelist, playwright, and a screenwriter. He was a writer-producer on the Emmy-nominated HBO series Big Love, is an award-winning playwright, and the author of the novels The Angry Buddhist, The Bones, and Shining City, which was named a Best Book of 2008 by the Washington Post. Greenland lives in Los Angeles with his family.

This was a a truly unique read. This is why I love reviewing – I’m presented with opportunities to read books I’d never buy when wandering around a bookstore. I’ve had some amazing experiences with novels that I would have just walked on by because I only had so much money to spend and so I spent it in familiar arenas. I’m not even sure where I Regret Everything fits – it’s a literary read so I’d have surely passed it by just for that. In doing that I would have missed a very enjoyable tale.

Jeremy Best is a lawyer but he hides a passion – he’s a poet. He’d rather be writing all the time but it’s not to be. He keeps his second identity well hidden from his colleagues until one day the managing partner’s daughter wanders into his office asking him about writing poetry. He wonders how she found him out but he is also very intrigued.

Spaulding Simonson is a child floating between her divorced parents, neither of which really wants her. She has been troublesome and is recently out of a stint in a mental hospital for reasons she doesn’t even understand. She and Jeremy find themselves attracted to each other but to call this book a romance is to do it a disservice. The characters are too real and too unreal all at the same time to live in any kind of world I could understand.

The writing is exceptional and just draws you in with clever turns of phrase and some very interesting twists. Mr. Greenland used to write for Big Love so he knows how to spin a yarn. This was not a really long book and in some ways I really wished it had gone on longer because I was sorry to leave these characters and their world. I’ll be keeping this one to read again.

You can follow the I Regret Everything Tour Schedule

You can purchase I Regret Everything on Amazon.com