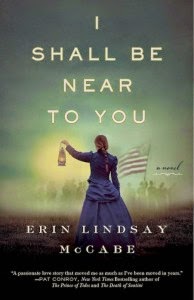 In I SHALL BE NEAR TO YOU, McCabe introduces us to newlywed Rosetta Wakefield. More accustomed to working as her father’s farmhand and happiest doing what others might call “man’s work,” Rosetta struggles with how to be a good wife to her childhood beau and new husband, Jeremiah. When Jeremiah leaves home to join the Union army, Rosetta finds the only way she can honor Jeremiah is to be with her husband—no matter what.
Cutting off her hair and donning men’s clothing, Rosetta enlists in the army as Private Ross Stone so that she might stand beside her husband. Joining, however, is the easy part, and now Rosetta must not only live and train with her male counterparts as they prepare for imminent battle, but she must also deal with Jeremiah, who is struggling with his “fighting” wife’s presence, not to mention the constant threat of discovery..
In brilliant detail, inspired by the letters of the real Rosetta Wakeman, McCabe offers a riveting look at the day-to-day lives of these secret women fighters as they defied conventions and made their personal contributions to history. Both a tender love story and a hard look at war, I SHALL BE NEAR TO YOU offers a unique exploration of marriage, societal expectations, and the role of women in the Civil War through the lens of a beautifully written novel..

Erin studied literature and history at University of California, Santa Cruz, earned a teaching credential at California State University, Chico, and taught high school English for seven years. Since completing her MFA in Creative Writing at St. Mary’s College of California in 2010, Erin has taught Composition at St. Mary’s College and Butte College. A California native, Erin lives in the Sierra Foothills with her husband, son, and a small menagerie that includes one dog, four cats, two horses, numerous chickens, and three goats.

This was a fascinating look at a woman’s experience as a soldier during the Civil War.  Yes, you read that correctly. I believe there were something like 300 women who dressed like men and fought in that war. I Shall Be Near to You is based in fact which makes it all the more fascinating. The letters of the real Rosetta survived and formed the basis of the story. The story of a woman who married just before her husband enlisted in the Union Army she decided she would not be separated from him – for better or worse and all that.

I found myself hooked from the start – Rosetta is a fascinating character and I suspect she would have been a firecracker in real life. The world created by Ms. McCabe is quite detailed and true, especially as the story moves to the battlefield. War is not pretty and no army camp is a gentile place. The men are rough, the language rougher and it’s all presented as it might have been. The realism of both camp and battle makes for some difficult passages but any book that deals with war will.

I found myself lost in the story as the descriptions of time and place had me immersed in the Civil World era. The characters were all well defined and  unique in tone. There were scenes that had me just about in tears. It was a good read about a remarkable phenomenon – a woman dressing as a man to join the army to be with her husband. A truly fascinating aspect of a horrible war.

You can purchase I Shall Be Near to You on Amazon.com