Welcome to a world of illusion, mystery and the story of a woman who tries very hard to keep her secrets to herself. The Illusionist’s Apprentice is a tale of murder at its heart but so much more in its soul. I was sent my copy at no charge by TLC Book Tours but as always, my thoughts are my own. 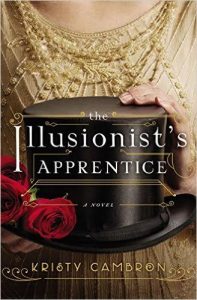 Harry Houdini’s one-time apprentice holds fantastic secrets about the greatest illusionist in the world. But someone wants to claim them . . . or silence her before she can reveal them on her own.

Boston, 1926. Jenny “Wren” Lockhart is a bold eccentric—even for a female vaudevillian. As notorious for her inherited wealth and gentleman’s dress as she is for her unsavory upbringing in the back halls of a vaudeville theater, Wren lives in a world that challenges all manner of conventions.

In the months following Houdini’s death, Wren is drawn into a web of mystery surrounding a spiritualist by the name of Horace Stapleton, a man defamed by Houdini’s ardent debunking of fraudulent mystics in the years leading up to his death. But in a public illusion that goes terribly wrong, one man is dead and another stands charged with his murder. Though he’s known as one of her teacher’s greatest critics, Wren must decide to become the one thing she never wanted to be: Stapleton’s defender.

Forced to team up with the newly formed FBI, Wren races against time and an unknown enemy, all to prove the innocence of a hated man. In a world of illusion, of the vaudeville halls that showcase the flamboyant and the strange, Wren’s carefully constructed world threatens to collapse around her. Layered with mystery, illusion, and the artistry of the Jazz Age’s bygone vaudeville era, The Illusionist’s Apprentice is a journey through love and loss and the underpinnings of faith on each life’s stage.

Kristy Cambron fancies life as a vintage-inspired storyteller. Her debut novel, The Butterfly and the Violin, was named to Library Journal’s Best Books of 2014 and nominated for RT Book Reviews’ Choice Awards Best Inspirational Novel of 2014 and for the 2015 INSPY Awards for Best Debut Novel. Her second novel, A Sparrow in Terezin, was named Library Journal’s Pick of the Month (Christian Fiction) for February 2015 and a Top Pick for RT Book Reviews. Kristy holds a degree in Art History from Indiana University. She lives in Indiana with her husband and three young sons.

I will admit to a love of illusion – whether it be on the stage or in the pages of a book. Can the performer keep the audience entertained and do something extraordinary? Can an author divert the reader so as to keep several plots spinning? Will either audience be fooled? Or will the secrets be revealed too early? I will admit that it took me a while to find my rhythm with this book. It wasn’t one that I picked up and immediately felt drawn into the tale. I would say it wasn’t until I was about a quarter into that I felt the pull of the plot. So if that happens to you please do keep reading, you will be rewarded.

Wren Lockhart is a well known illusionist who once worked with Harry Houdini. But she did make some enemies as she was part of his effort to debunk spiritualists who were claiming to speak to the dead. It seems that her efforts may be coming back to haunt her as a grand illusion by a rival goes very, very badly and her name ends up on the body of a dead man. Soon the FBI comes calling to question Wren and secrets she does not want brought to light are soon heading to the forefront.

As I noted above the book had a bit of a slow start but when it did pick up it was a very satisfying read. Wren is a delightful character, if a little tightly wound. I really enjoyed her though, she’s a strong woman with a great sense of style. The FBI officer trying to find the truth of the murder (and to protect Wren even though she doesn’t think she needs protecting) is also a complicated character. Elliot is a man who believes strongly in the law but something about Wren …well, you know where this is going. But it doesn’t get there easily and the two of them are wonderful together as they spar.

The plot moves along at a good clip and the references to the illusions are fun – no secrets are given except for couple that are pretty well known. The ending is very dramatic and I will admit that I did not see it coming although it felt like a stretch to me but it was wildly dramatic and made for exciting reading.

One lucky US reader will win a copy of The Illusionist’s Apprentice. Just enter as many ways as you would like on the Gleam widget below. Good luck everyone.