In the Aftermath by Jane Ward – Blog Tour and Book Review

I was sent a free copy of In the Aftermath by Jane Ward through TLC Book Tours. All opinions are my own. 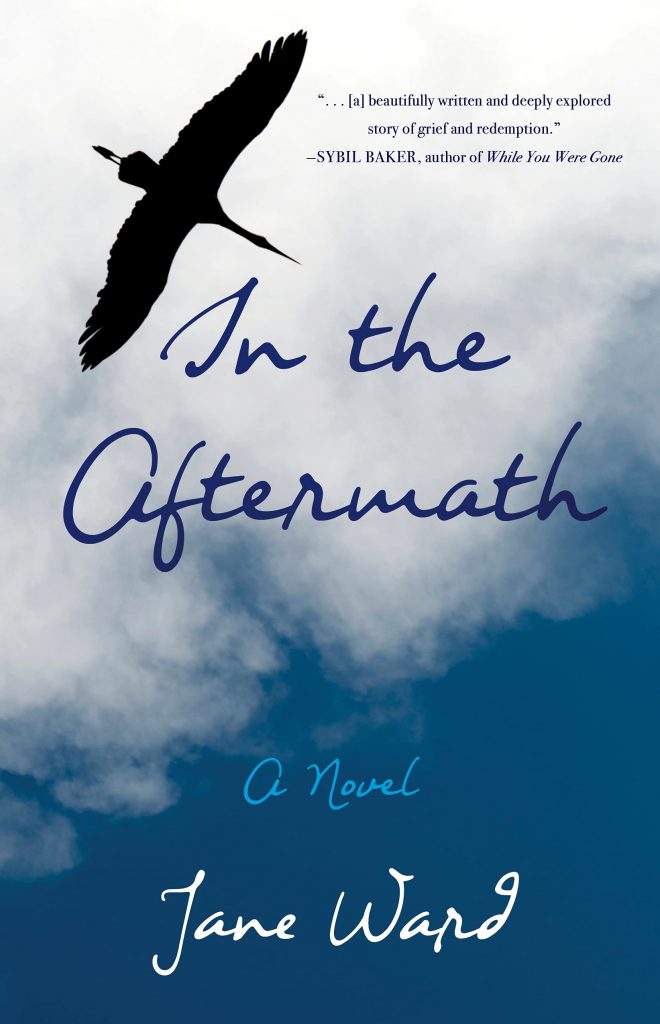 About In the Aftermath

When David Herron—overwhelmed and despairing, his family’s business and finances in ruin due to the bursting lending bubble of 2008—takes his own life one chilly spring morning, he has no idea the ripple effect his decision will set into motion.

Two years later, his widow, Jules, is now an employee of the bakery she and David used to own—and still full of bitterness over David’s lies, perceived cowardice, and ultimate abandonment of her and their now-teenage daughter, Rennie. Rennie, meanwhile, struggles socially at school, resents her work-obsessed mother, and is convinced she’s to blame for her father’s death.

When Denise, the former police detective who worked (and, due to her own personal struggles at the time, mishandled) David’s case, catches sight of Rennie at her sons’ school, she’s struck by the girl’s halo of sadness—and becomes obsessed with attempting to right the wrongs she believes she perpetrated two years ago.

And as all this unfolds in Boston, Daniel, the guilt-ridden young man who, in his old life as a banker, helped create the circumstances that led to David’s suicide, continues to punish himself for his sins by living half a life, working odd jobs and bouncing from one US city to another, never staying long enough to make friends or build something lasting.

Ultimately, each of these very different people—all of them tied together by one tragic event—must learn in their own way how to say good-bye to the past and move into a brighter future.

“Ward masterfully builds a sense of dread with mundane details in the first section, and the way that she finds significance in moments of ordinary, everyday life is reminiscent of the work of Anne Tyler. This deeply empathetic novel deals sensitively with difficult subjects. . . . An insightful and psychologically astute story of ordinary people moving forward after personal tragedy.” —Kirkus Reviews, starred review

Jane Alessandrini Ward is the author of Hunger (Forge 2001) and The Mosaic Artist. She graduated from Simmons College with a degree in English literature and began working almost immediately in the food and hospitality industry: private events planner with Creative Gourmets in Boston, planner of corporate parties at The 95th Restaurant in Chicago, and weekend baker at Quebrada Bakery in Arlington, Massachusetts. She has been a contributing writer for the online regional and seasonal food magazine Local In Season and a blogger and occasional host of cooking videos for MPN Online, an internet recipe resource affiliated with several newspapers across the country. Although a Massachusetts native, Jane recently settled in Chicago after returning to the US from Switzerland.

In the Aftermath is a very powerful book about personal decisions and the impact they can have on the people in your life, close and far. David and Jules run a bakery and all appears to be going along just fine but David is keeping the financial situation away from Jules so she has no clue how dire things are. When David reaches what he feels is the end of his rope he makes a fateful decision that will impact all around him.

After his suicide Jules finds herself working in the bakery she once owned. Her daughter is resentful and scared thinking that she is the reason everything went to hell. David’s friend – whom he asked to meet just before he killed himself – wonders what he could have done differently and the police officer assigned to investigate is wondering if maybe she didn’t do her best work.

What follows is a deeply involving story about the impacts of this one action on so many different people. I’m not going to lie – this is not an easy read at times but there is a lot here to be thankful for as a reader. A strong narrative, well developed characters and story that keeps you turning the pages until the very end. Life is not happily ever after so sometimes not every book you read should be all sweetness and light. Sometimes it’s good to get into a story that has a bit of the nitty gritty about it. When it’s one that is written as well as this one was you are rewarded for the time spent reading.

Be sure to Follow the Tour for more reviews and posts.