In the Shadow of the Storm by Anna Belfrage – Book Review

I received a free copy of In the Shadow of the Storm by Anna Belfrage from Historical Fiction Virtual Book Tours for my honest review. Ms. Belfrage is the author of the Graham Saga – a series I enjoyed very much. 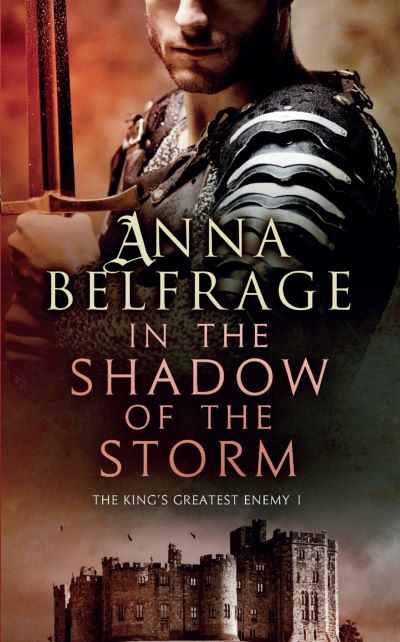 Adam de Guirande owes his lord, Sir Roger Mortimer, much more than loyalty. He owes Sir Roger for his life and all his worldly good, he owes him for his beautiful wife – even if Kit is not quite the woman Sir Roger thinks she is. So when Sir Roger rises in rebellion against the king, Adam has no choice but to ride with him – no matter what the ultimate cost may be.

England in 1321 is a confusing place. Edward II has been forced by his barons to exile his favourite, Hugh Despenser. The barons, led by the powerful Thomas of Lancaster, Roger Mortimer and Humphrey de Bohun, have reasons to believe they have finally tamed the king. But Edward is not about to take things lying down, and fate is a fickle mistress, favouring first one, then the other.

Adam fears his lord has over-reached, but at present Adam has other matters to concern him, first and foremost his new wife, Katherine de Monmouth. His bride comes surrounded by rumours concerning her and the baron, and he hates it when his brother snickers and whispers of used goods.

Kit de Courcy has the misfortune of being a perfect double of Katherine de Monmouth – which is why she finds herself coerced into wedding a man under a false name. What will Adam do when he finds out he has been duped?

Domestic matters become irrelevant when the king sets out to punish his rebellious barons. The Welsh Marches explode into war, and soon Sir Roger and his men are fighting for their very lives. When hope splutters and dies, when death seems inevitable, it falls to Kit to save her man – if she can.

In the Shadow of the Storm is the first in Anna Belfrage’s new series, The King’s Greatest Enemy, the story of a man torn apart by his loyalties to his baron, his king, and his wife.

Had Anna been allowed to choose, she’d have become a professional time-traveller. As such a profession does as yet not exists, she settled for second best and became a financial professional with two absorbing interests, namely history and writing. These days, Anna combines an exciting day-job with a large family and her writing endeavours.

When Anna fell in love with her future husband, she got Scotland as an extra, not because her husband is Scottish or has a predilection for kilts, but because his family fled Scotland due to religious persecution in the 17th century – and were related to the Stuarts. For a history buff like Anna, these little details made Future Husband all the more desirable, and sparked a permanent interest in the Scottish Covenanters, which is how Matthew Graham, protagonist of the acclaimed The Graham Saga, began to take shape.

Set in 17th century Scotland and Virginia/Maryland, the series tells the story of Matthew and Alex, two people who should never have met – not when she was born three hundred years after him. With this heady blend of romance, adventure, high drama and historical accuracy, Anna hopes to entertain and captivate, and is more than thrilled when readers tell her just how much they love her books and her characters.

Presently, Anna is hard at work with her next project, a series set in the 1320s featuring Adam de Guirande, his wife Kit, and their adventures and misfortunes in connection with Roger Mortimer’s rise to power. The King’s Greatest Enemy is a series where passion and drama play out against a complex political situation, where today’s traitor may be tomorrow’s hero, and the Wheel of Life never stops rolling.

The first installment in the Adam and Kit story, In the Shadow of the Storm, will be published in the autumn of 2015.

Other than on her website, www.annabelfrage.com, Anna can mostly be found on her blog, http://annabelfrage.wordpress.com – unless, of course, she is submerged in writing her next novel.

I was very excited when I learned that Ms. Belfrage would be embarking on another series. I really enjoyed her Graham Saga books.  In the Shadow of the Storm introduces her new characters Adam and Kit de Guirande. They are married at the start of the book but their marriage is started with a lie. They are fictional but they exist within the reality of the rebellion against Edward II.

Adam is a very righteous knight and his efforts have been rewarded by his master – he’s been given lands and now an advantageous marriage. Little does he know that the girl he was to marry (Katherine) wanted nothing to do with him and a substitute has been found in the form of her half sister (Kit). They look enough alike to pass. Kit is not happy about being forced into this marriage but she is threatened and feels she has no other option.

These two don’t always have smooth sailing but they work together to form a family and try and keep safe in very dangerous times. Adam’s master, Lord Mortimer fought long and hard against Edward II and it was a complicated time in England’s history. Ms. Belfrage skillfully weaves her fictional characters into that history and into the lives of historical characters. The book is well researched yet it doesn’t feel like you are reading a history lesson. It’s the smooth inclusion of facts of every day life, clothing, food, etc., that makes reading this book so enjoyable. The characters both real and fictional are well developed and not cookie cutter. I am very much looking forward to following along with the exploits and lives of Adam, Kit and their family.

You can read my thoughts on the subsequent volumes of The King’s Greatest Enemy Series by reading my reviews of Days of Sun and Glory, Under the Approaching Dark, and, The Cold Light of Dawn.