Do you ever wonder what happens to the characters in a book you read after it ends? Well Jack Dawkins by Terry Ward answers that question for at least one famous character – the Artful Dodger from Oliver Twist by Charles Dickens. I was sent a free copy by the author for my honest review. 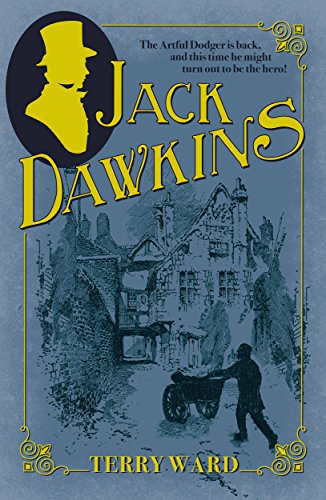 After Oliver Twist intervenes to save Jack Dawkins – the legendary Artful Dodger – from transportation to Botany Bay, Jack embarks on what proves to be a perilous quest to discover his roots. Before he can say ‘Fagin!’ he’s battling to survive a devastating flood and rescue beautiful black-haired, green-eyed Lysette Godden, the girl of his dreams, from the hands of murderous villains. Jack and Lysette, searching for Jack’s parents, head to France and have an adventure there which tests their mettle and mutual love to the utmost and changes their lives for ever.
Brilliantly and evocatively written, Jack Dawkins is a worthy sequel to Charles Dickens’s immortal masterpiece Oliver Twist.

Since 1983 Terry Ward has served as a consultant to Fortune 1000 companies on creating compelling presentations. With his work in advertising and as a Hollywood writer, along with his training in improvisation, Terry has developed simple yet powerful concepts that allow people to connect with their listeners using the spoken word.

It has been a very long time since I have read Oliver Twist. I have read many of Dickens’ works as I find them to be really good stories. I was glad for the short reminder at the start of Jack Dawkins reminding me of the end of the tale so I could remind myself of it. But don’t despair, if you have not read Oliver Twist you can still easily enjoy Jack Dawkins as it does stand on its own quite well.

The book opens with a prologue and within is a letter from Mr. Jack Dawkins himself so some of the ending is foreshadowed.  From that point the tale follows the Artful Dodger as he reforms back into plain old Jack Dawkins through the good offices of his friend Oliver Twist and his benefactor, Mr. Brownlow. But the path to a life of freedom and comfort will not come easily to our former street urchin but the getting there is a good story indeed.

Jack is wasting away in Newgate Prison when he receives a very surprising offer from his old friend Oliver’s guardian Mr. Brownlow – he is to be paroled to work on a sheep farm. Jack isn’t to sure about this work thing but he is willing to try anything rather than to stay in prison. Along the way to his new position he befriends (surprisingly) a copper who offers to help him find his mother. For finding his parents is now his Number One desire.

Jack moves into the country and meets his new sponsor’s daughter and it is love at first sight – at least for him. He starts to learn the lay of the land but as things usually work out for him, life is not a straight and narrow path. I’ll not spoil the good and the bad and the worse that happens as it’s well worth the read to find out for yourself.

Mr. Ward does an excellent job of bringing that Dickensian world to life through description and dialog. That’s not to say that this isn’t it’s own story. It was a riveting tale at times trying to keep up with Jack and the trouble that seemed to follow him wherever he went. He is, at heart a good boy who happened to be born at one of the worst times in Britain’s history for the lower classes.

If you are a fan of Charles Dickens you will certainly enjoy Jack Dawkins. If you want a good story, you will find one here.