I have enjoyed the Maisie Dobb’s series – although I did find that the last few books had not done the character justice – I feel she is back to herself with this new installment, Journey to Munich. I was very happy to be sent a copy for review by TLC Book Tours. 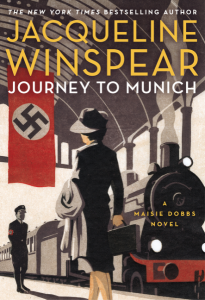 Working with the British Secret Service on an undercover mission, Maisie Dobbs is sent to Hitler’s Germany in this thrilling tale of danger and intrigue—the twelfth novel in Jacqueline Winspear’s New York Times bestselling “series that seems to get better with each entry” (Wall Street Journal).

It’s early 1938, and Maisie Dobbs is back in England. On a fine yet chilly morning, as she walks towards Fitzroy Square—a place of many memories—she is intercepted by Brian Huntley and Robert MacFarlane of the Secret Service. The German government has agreed to release a British subject from prison, but only if he is handed over to a family member. Because the man’s wife is bedridden and his daughter has been killed in an accident, the Secret Service wants Maisie—who bears a striking resemblance to the daughter—to retrieve the man from Dachau, on the outskirts of Munich.

The British government is not alone in its interest in Maisie’s travel plans. Her nemesis—the man she holds responsible for her husband’s death—has learned of her journey, and is also desperate for her help.

Traveling into the heart of Nazi Germany, Maisie encounters unexpected dangers—and finds herself questioning whether it’s time to return to the work she loved. But the Secret Service may have other ideas. . . .

acqueline Winspear is the author of the New York Times bestsellers Leaving Everything Most Loved, Elegy for Eddie, A Lesson in Secrets, The Mapping of Love and Death, Among the Mad, and An Incomplete Revenge, as well as four other national bestselling Maisie Dobbs novels. Her standalone novel, The Care and Management of Lies, was also a New York Timesbestseller. She has won numerous awards for her work, including the Agatha, Alex, and Macavity awards for the first book in the series, Maisie Dobbs, which was also nominated for the Edgar Award for Best Novel and was a New York Times Notable Book. Originally from the United Kingdom, she now lives in California.

I must admit that I had lost faith in Maisie. The last few books gave me a heroine that was at a far remove from the smart, direct woman I had met in the first book I had read. In this book Maisie leaves Spain where she had gone to deal with the traumas she had suffered in A Dangerous Place. I don’t want to offer too much in the way of plot for those who have not read the previous book. This book can stand alone as the author does weave in the pertinent information to inform the reader of past events in such a way that you are educated without feeling like you are being force fed a long list of details.

Maisie returns to England to face the ghosts of her past. She is not anxious to go back to her childhood home, nor does she want to spend time with her in laws. She opts to temporarily move in with her old friend Priscilla and that is just what she needs. Although her peaceful stay does not last long as she is approached to handle a sensitive mission to Germany for her country.  As much as she doesn’t want to do it she knows she will and in a way knows it’s what she needs to get her out of her funk.

As Maisie pursues her assignment she soon learns that all is not as it seems and she was not told everything she really needed to know. Thrown into the mix is the request of her husband’s former employer who wants her to find his daughter who has disappeared somewhere in Germany. All of this takes place just as Hitler moves into Austria and the Reich strengthens it’s hold on the people of the region. Maisie finds herself caught in a dangerous place once again.

I enjoyed this book. It was a return to the Maisie I first fell in love with. She has changed due to the major events she has experienced but she is back to being a smart, decisive woman. She is back in control of her life and moving forward. Unfortunately the times to come are not good as well all know from history. While the book ends with Chamberlain’s appeasement, Hitler did not pay any attention to what England or the rest of the world. Soon England will be at war and I’m sure Maisie will be elbow deep in fighting the Nazis to the best of her abilities. I’m glad she has found herself. I’ll look forward to the next book now despite my not wanting to read WWII books. This is a character I’ll follow into that second Great War.

I had a hard time putting this book down. It was full of twists, turns and spies from assorted countries all trying to deal with a very great evil.

You can read my reviews of of the other books in the Maisie Dobbs Series:

The Mapping of Love and Death

Leaving Everything Most Loved 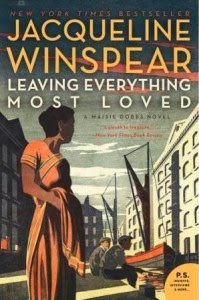 I am pleased to review my second book in the Maisie Dobbs series, Elegy for Eddie. I was sent this book at no charge for my honest review. About the Book: • Paperback: 368 pages • Publisher: Harper Perennial (October 30, 2012) Early April 1933. To the costermongers of […]

March is Maisie Month! Jacqueline Winspear is releasing her latest Maisie Dobbs book, Elegy for Eddie and to celebrate TLC Book Tours is showcasing ALL of the Maisie Dobbs books. I had not met Maisie until now but I am sure glad I have […]