As I keep trying to stretch out of my normal reading box I look towards books that take place in “today” as opposed to the historical novels I so love. The Keeper of Lost Things by Ruth Hogan is actually a rather timeless tale. I am so very glad I decided to accept this book for review at no charge from TLC Book Tours. 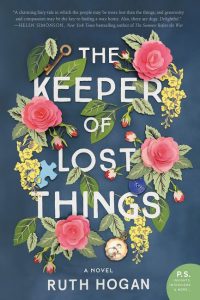 About The Keeper of Lost Things:

A charming, clever, and quietly moving debut novel of of endless possibilities and joyful discoveries that explores the promises we make and break, losing and finding ourselves, the objects that hold magic and meaning for our lives, and the surprising connections that bind us.

Found, on a bench in Riveria Public Gardens, 31st October.

Anthony Peardew is the keeper of lost things. Forty years ago, he carelessly lost a keepsake from his beloved fiancée, Therese. That very same day, she died unexpectedly. Brokenhearted, Anthony sought consolation in rescuing lost objects—the things others have dropped, misplaced, or accidently left behind—and writing stories about them. Now, in the twilight of his life, Anthony worries that he has not fully discharged his duty to reconcile all the lost things with their owners. As the end nears, he bequeaths his secret life’s mission to his unsuspecting assistant, Laura, leaving her his house and and all its lost treasures, including an irritable ghost.

Recovering from a bad divorce, Laura, in some ways, is one of Anthony’s lost things. But when the lonely woman moves into his mansion, her life begins to change. She finds a new friend in the neighbor’s quirky daughter, Sunshine, and a welcome distraction in Freddy, the rugged gardener. As the dark cloud engulfing her lifts, Laura, accompanied by her new companions, sets out to realize Anthony’s last wish: reuniting his cherished lost objects with their owners.

Long ago, Eunice found a trinket on the London pavement and kept it through the years. Now, with her own end drawing near, she has lost something precious—a tragic twist of fate that forces her to break a promise she once made.

As the Keeper of Lost Objects, Laura holds the key to Anthony and Eunice’s redemption. But can she unlock the past and make the connections that will lay their spirits to rest?

Full of character, wit, and wisdom, The Keeper of Lost Things is heartwarming tale that will enchant fans of The Particular Sadness of Lemon Cake, Garden Spells, Mrs Queen Takes the Train, and The Silver Linings Playbook.

Find The Keeper of Lost Things at Harper Collins

Ruth Hogan describes herself as a “rapacious reader, writer, and incorrigible magpie” whose own love of small treasures and curiosities and the people around her inspired her first novel. She lives north of London.

This book intrigued me from my initial read of the synopsis. It was a little delayed in getting to me but I was excited when it finally arrived. I opened it up to read and I knew from the first paragraph that I was going to love this book.

Now, this is the type of book that one is either going to love or going to hate. I sincerely doubt there is going to be a middle ground. For me it was a bit of magical delight with a cast of characters that I enjoyed spending my time with. None of them was entirely likable and some of them were utterly unpleasant but taken all together I didn’t want to leave them. This is what makes a book like life. People are full of contradictions and no one is completely perfect being.

Anthony Peardew is a man living rather half a life as he lost his love before they could be married. He collects lost things he finds on his daily walks about town. He keeps them in his office, well sorted and cataloged as to where and when they were found. He’s hired an assistant, Laura to help keep the house neat and do what needs doing but she is not aware of his…..collection.

Anthony leaves the house and its contents to Laura after his death with the proviso that she try and return the lost things. But Laura is, truth be told, as lost as some of the items in the study. As she works with the gardener – for whom she has feelings – and the young neighbor Sunshine who has come to be her new friend, they find a way to start returning the lost things. But all is not quiet in the house as the spirit of Anthony’s fiance needs one lost thing to be found.

This was a book full of happenstance and spirits. At the same time Anthony and Laura’s story is unfolding another tale is happening almost simultaneously. They intersect at minute points but those intersections show how intertwined we all are.

Ms. Hogan has a magical way of writing. The only complaint American readers might have would be the British references. It wasn’t problematic for me due to all of the reading that I do but someone unfamiliar with some of the words/phrases/products might find themselves at a bit of a loss. I was enchanted from the start as I noted. It’s not always a happy tale but it is certainly one to engage the emotions. So I say sit down with the lovely cup of tea and settle in for a truly enjoyable read.

ALL PURCHASE LINKS ARE AFFILIATE LINKS. IF YOU MAKE A PURCHASE THROUGH THEM I RECEIVE A SMALL COMMISSION (AT NO ADDITIONAL CHARGE TO YOU.)