Killers of the Flower Moon by David Grann – Book Review

There are many instances of injustice in this country’s history. Some are well known and others still remain hidden. Then there are those like the tale told in Killers of the Flower Moon – well known in the area where the abuse occurred but pretty much unknown to all but students of history. I was totally unaware of the happenings told in the book but the hubby knew the basics. Read on to learn about this book, then read this book! 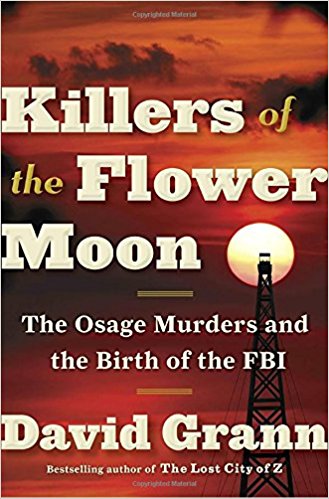 About Killers of the Flower Moon:

In the 1920s, the richest people per capita in the world were members of the Osage Indian nation in Oklahoma. After oil was discovered beneath their land, they rode in chauffeured automobiles, built mansions, and sent their children to study in Europe.
Then, one by one, the Osage began to be killed off. The family of an Osage woman, Mollie Burkhart, became a prime target. Her relatives were shot and poisoned. And it was just the beginning, as more and more members of the tribe began to die under mysterious circumstances.
In this last remnant of the Wild West—where oilmen like J. P. Getty made their fortunes and where desperadoes like Al Spencer, the “Phantom Terror,” roamed—many of those who dared to investigate the killings were themselves murdered. As the death toll climbed to more than twenty-four, the FBI took up the case. It was one of the organization’s first major homicide investigations and the bureau badly bungled the case. In desperation, the young director, J. Edgar Hoover, turned to a former Texas Ranger named Tom White to unravel the mystery. White put together an undercover team, including one of the only American Indian agents in the bureau. The agents infiltrated the region, struggling to adopt the latest techniques of detection.  Together with the Osage they began to expose one of the most chilling conspiracies in American history.
In Killers of the Flower Moon, David Grann revisits a shocking series of crimes in which dozens of people were murdered in cold blood. Based on years of research and startling new evidence, the book is a masterpiece of narrative nonfiction, as each step in the investigation reveals a series of sinister secrets and reversals. But more than that, it is a searing indictment of the callousness and prejudice toward American Indians that allowed the murderers to operate with impunity for so long. Killers of the Flower Moon is utterly compelling, but also emotionally devastating.

DAVID GRANN is a #1 New York Times bestselling author and an award-winning staff writer at The New Yorker magazine. His latest book, Killers of the Flower Moon: The Osage Murders and the Birth of the FBI, will be released in April. Based on years of research, it explores one of the most sinister crimes and racial injustices in American history.

His first book, The Lost City of Z: A Tale of Deadly Obsession in the Amazon, became a #1 New York Times bestseller and has been translated into more than twenty-five languages. Shortlisted for the Samuel Johnson Prize, the book was chosen as one of the best books of 2009 by the New York Times, the Washington Post, Entertainment Weekly, Bloomberg, Publishers Weekly, and the Christian Science Monitor, and it also won the Indies Choice award for the best nonfiction book of that year.

The Lost City of Z has been adapted into a major motion picture, which will be released in theaters in April 2017. Produced by Brad Pitt’s production company, the film is directed by James Gray and stars Charlie Hunnam, Sienna Miller, Robert Pattinson, and Tom Holland.

Grann’s other book, The Devil and Sherlock Holmes, contains many of his New Yorker stories, and was named by Men’s Journal one of the best true crime books ever written. The stories in the collection focus on everything from the mysterious death of the world’s greatest Sherlock Holmes expert to a Polish writer who might have left clues to a real murder in his postmodern novel. Another piece, “Trial by Fire,” exposed how junk science led to the execution of a likely innocent man in Texas. The story received a George Polk award for outstanding journalism and a Silver Gavel award for fostering the public’s understanding of the justice system.His stories have also been a source of material for feature films. “Old Man and the Gun”—which is in The Devil and Sherlock Holmes, and is about an aging stick-up man and prison escape artist—is slated to be directed by David Lowery and to star Robert Redford.

Before joining The New Yorker in 2003, Grann was a senior editor at The New Republic, and, from 1995 until 1996, the executive editor of the newspaper The Hill. He holds master’s degrees in international relations from the Fletcher School of Law & Diplomacy as well as in creative writing from Boston University. After graduating from Connecticut College in 1989, he received a Thomas Watson Fellowship and did research in Mexico, where he began his career in journalism.

I was completely ignorant of the tale this book tells. I did not know anything about the Osage, their oil rights or their being murdered for them. It’s sad that I’m not surprised that these events happened. The attitudes at the time toward Native Americans saw them as lessor humans. The same people that were supposed to be helping them were doing anything but.

The basics of the tale are the Osage moved onto land in Oklahoma that no one thought had any value. A wise tribal leader had it written into the land agreement that the tribe would maintain the rights to what was underground as well. This proved to be very smart as soon oil was discovered – a LOT of oil. Each headright as they were called was worth quite a bit of money as time went on. Soon the Osage were rolling in money and this led to fair amount of resentment.

Then the bodies started piling up. At first the investigations were haphazard and less than productive. As the death toll rose the outcry was such that the Federal Government sent in an investigator – from the nascent FBI – to sort out what was going on. This was the first big case for the bureau after J. Edgar Hoover took charge after the Teapot Dome Scandal. He wanted (and needed) to prove the Bureau could do a good job.

The man sent in for the job, Tom White, a former Texas Ranger found himself trying to solve a case that seemed to lead to more and more murders. As he investigation led to its conclusion he found a long list of people taking advantage of the Osage people.

But the end of White’s investigation is not the end of the story. As Mr. Grann was investigating the story he found many more stories of death and abuse of Osage at the hands of white people in town; either family members or the guardians who were supposed to be protecting people. He discovered there is still a lot left unsettled in this Oklahoma community.

I was shocked, horrified, appalled and disgusted at this piece of history. Not to mention the general, political corruption described within. It seems that money truly is an evil influence and for certain people they are truly willing to do anything to amass large quantities of it.  I wanted to cry for what was done to these families for oil and the money it brought in. The Osage that pushed for investigations were often left with a feeling of no one cared because they were just Indians so was it really murder anyway?

The book is well written, very well researched and decidedly hard to put down. It reads in parts likes like a novel because it’s truly hard to believe that people can behave this way but truth, as they say is stranger than fiction and this book proves that for sure. All I can write is read this book. I think it is important that abuses like this should not be lost to history. They need to be remembered so as to not be forgotten.

High Noon: The Hollywood Blacklist and the Making of an American Classic by Glenn Frankel