Knee Deep by Karol Ann Hoeffner doesn’t come out until September and I am happy to welcome the author with an early spotlight of the book.. 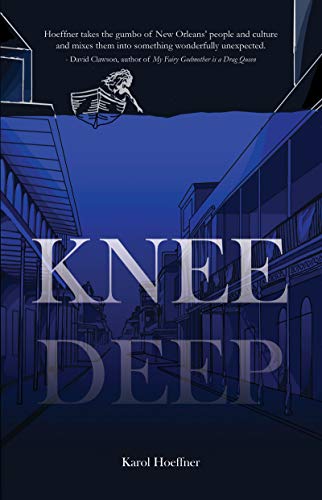 Named after a hurricane, Camille is the rebellious sixteen-year-old daughter of a New Orleans bar-owner who grows up in the shadow of Bourbon Street, raised on stories of hauntings, lusty encounters and voodoo magic.  And even though her family loses their home in a hurricane, she counts herself among the lucky until she discovers that her eighteen-year-old neighbor whom she secretly loves goes missing in the storm. In Camille’s own words: “This is the story of what happened to me on Fat Tuesday, how I ended up on the steps of St. Mary’s, the hem of my pirate’s petticoat soaked in somebody’s else’s blood. Although I know the story to be true, I don’t totally believe it myself. Like all good tales born out of the bayou, mine involves the dead, the living and the one trapped in the brackish waters between heaven and hell. It is the story of true love and true disaster, and at the end of it, I’ll leave it up to you to decide which is the harder to survive.”

Karol Ann Hoeffner is a novelist and screenwriter in Hollywood with over a dozen credits in feature-length film and television.