A Lady in Disguise by Sandra Byrd – Book Review

I received a free copy of A Lady in Disguise for my honest review. 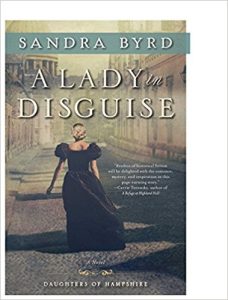 In this intriguing novel of romance, mystery, and clever disguise set in Victorian England, a young woman investigates the murder of her own father.

After the mysterious death of her father, Miss Gillian Young takes a new job as the principal costume designer at the renowned Drury Lane Theatre Royal. But while she remembers her father as a kind, well-respected man of the Police Force, clues she uncovers indicate he’d been living a double life: a haunting photograph of a young woman; train stubs for secret trips just before his death; and a receipt for a large sum of money. Are these items evidence of her father’s guilty secrets? His longtime police partner thinks so.

Then Gillian meets the dashing Viscount Thomas Lockwood. Their attraction is instant and inescapable. As their romantic involvement grows, Gillian begins to suspect even Lockwood’s motives. Does Lord Lockwood truly love her? Or is his interest a front for the desire to own her newly inherited property? And what should she make of her friend’s suggestion that Lockwood or men like him were involved in the murder of her father?

Soon Gillian is convinced that her father has left evidence somewhere that can prove his innocence and reveal the guilty party. But someone wants to stop her from discovering it. The closer she comes to uncovering it, the more menacing her opposition grows. With her life on the line, Gillian takes on an ingenious disguise and takes on the role of a lifetime to reveal the true killer—before it’s too late both for her and for those that she loves.

After earning her first rejection at the age of thirteen, bestselling author Sandra Byrd has now published more than fifty books. Her adult fiction debut, Let Them Eat Cake, was a Christy Award finalist, as was her first historical novel, To Die For: A Novel of Anne Boleyn. To Die For was also named by Library Journal as a Best Books Pick, as was The Secret Keeper: A Novel of Kateryn Parr.

A life-long lover of Victorian Gothic romances, Sandra’s new series, Daughters of Hampshire, weaves elements of that mystical, traditional genre with inspirational and literary threads. Mist of Midnight, the series’ first book, was honored with a coveted Editor’s Choice designation from the Historical Novel Society. The second book in the series, Bride of a Distant Isle, launched in March, 2016 and the third, A Lady in Disguise is just out in 2017.

She is passionate about helping new authors develop their talent and their work toward traditional or independent publication. As such, she has mentored and coached hundreds of new writers and continues to edit and coach dozens to success each year.

This is the third book in the Daughters of Hampshire series and the second that I’ve read. In this tale as the story opens our heroine, Gillian Young is burying her father. She is the granddaughter of a lord but her mother ran away from that life to be actress. She married a man of the middle class and her parents just really didn’t want to see her or her husband. They did relent some for Gillian. Gillian has proven to be a very talented seamstress and makes her living sewing for one lofty patroness and for the theatre.

As Gillian returns from burying her father she finds her house being unceremoniously searched. She is then told that her father is under suspicion for illegal acts. She finds it hard to believe and she she starts following some clues but they only lead to threats against her. She has someone to go to – her father’s partner, the Inspector and his son, Francis also a police officer who wants to court her. Problem is her neighbor back at the ancestral house, Viscount Lockwood also is pursuing her. But are both suits genuine?

I truly enjoyed this historical mystery/romance. It was a solid mix of both genres with a great cast of characters. Ms. Byrd creates a very real world for her characters and while they are fictional she does add a few real life figures into her tale. Her descriptions of the lives of both the rich and the poor are well drawn and I could easily imagine the places as I read. The same could be said for the clothing – which is important when a fair part of the book revolves around the main character’s creations.

I will admit to figuring out the bad guy pretty early on but it didn’t detract from the overall enjoyment of the book for me. I liked the characters and their stories and didn’t want to leave their world.

Sandra Byrd is running some fun giveaways on her site, sandrabyrd.com one is a tea themed box, the other a fashion themed box so be sure to head over to enter to win. Just click on the widget below to learn more. Good luck everyone. 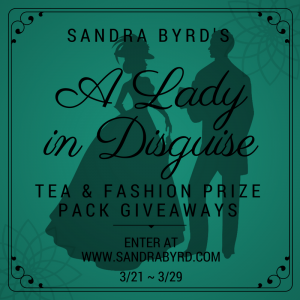 All purchase links are affiliate links which means if you buy anything through them I receive a small commission which helps to keep the Farm cats in treats and toys.

Yum
Share
Email
A Lady in Disguise. Sandra Byrd
Learning How to Use Your New Pressure Cooker – with a Recipe
The Enemies of Versailles by Sally Christie – Book Review