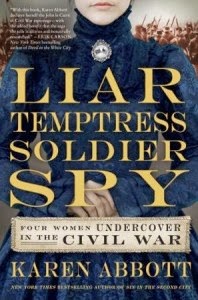 In Liar, Temptress, Soldier, Spy, bestselling author Karen Abbott tells the spellbinding true story of four women who risked everything—their homes, their families, and their very lives—during the Civil War.
Seventeen-year-old Belle Boyd, an avowed rebel with a dangerous temper, shot a Union soldier in her home and became a courier and spy for the Confederate army, using her considerable charms to seduce men on both sides. Emma Edmonds disguised herself as a man to enlist as a Union private named Frank Thompson, witnessing the bloodiest battles of the war and infiltrating enemy lines, all the while fearing that her past would catch up with her. The beautiful widow Rose O’Neal Greenhow engaged in affairs with powerful Northern politicians, used her young daughter to send information to Southern generals, and sailed abroad to lobby for the Confederacy, a journey that cost her more than she ever imagined. Elizabeth Van Lew, a wealthy Richmond abolitionist, hid behind her proper Southern manners as she orchestrated a far-reaching espionage ring—even placing a former slave inside the Confederate White House—right under the noses of increasingly suspicious rebel detectives.
Abbott’s pulse-quickening narrative weaves the adventures of these four forgotten daredevils into the tumultuous landscape of a broken America, evoking a secret world that will surprise even the most avid enthusiasts of Civil War–era history. With a cast of real-life characters, including Nathaniel Hawthorne, General Stonewall Jackson, Detective Allan Pinkerton, Abraham and Mary Todd Lincoln, and Emperor Napoléon III,Liar, Temptress, Soldier, Spy shines a dramatic new light on these daring—and, until now, unsung—heroines.


Karen Abbott is the New York Times bestselling author of Sin in the Second City and American Rose. She is a regular contributor to Smithsonian.com, and also writes for Disunion, the New York Times series about the Civil War. A native of Philadelphia, where she worked as a journalist, she now lives with her husband and two African Grey parrots in New York City.
Find out more about Karen at her website, and follow her on Facebook and Twitter.

I have a fascination with the Civil War that came to me somewhat late in life. I really did not like American History when I was in school; I was far more interested in European history. It took a trip to Gettysburg to stir my interest in the war that almost tore this country apart. Since then I have read quite a few books on the various battles and prominent people of the War Between the States.

Liar, Temptress, Soldier, Spy details the stories of four women who risked their lives to support their respective side in the War. The book alternates chapters between the four women and I have to note that this was a bit disconcerting as a chapter would end at an emotional moment and it would be three chapters before it would pick up again and I would half forget where I was within each woman’s story. It might have been easier on the reader to tell each woman’s story in larger pieces before switching to the next one. That being written I did thoroughly enjoy the book. It read like fiction rather than non-fiction but given what these women did truth is indeed stranger than fiction.

Each woman was incredibly remarkable in her own right; Belle Boyd was only 17 when she killed a Union soldier while defending a family member’s honor. She used her wits to spy for the Confederacy. Elizabeth van Lew was a woman far ahead of her time living in Richmond. She was devastated when the South seceded and she used her personal fortune to help care for Union soldiers held in Confederate prisons and developed a very large spy network – even placing someone in the Davis mansion! Emma Edmonds lived her life as a man going so far as to enlist in the Union army. Rose Greenhow was a widow with friends in high places in Washington and she used them to learn the wheres and whats of the Union army’s movements so she could pass it on to her friend, General Beauregard.

It was a confusing time for the country and that confusion allowed for plenty of opportunities for women to use their skills in defense of their side. Little suspected at first because they were just women they did ultimately fall under suspicion and their sex did not keep them safe.

Like the best of fiction, I had a hard time putting this one down and it will join the other books in my Civil War library. Most people expect non fiction to be dry and textbook like but this book is as far from that as you could imagine. It’s like a suspense/thriller but of course we all know who wins in the end.

You can follow the Liar, Temptress, Soldier, Spy Tour Schedule

You can purchase Liar, Temptress, Soldier, Spy on Amazon.com