Books, Cooks, Looks
From the Garden ~ Garden ~ Life on the Farm ~ The Happy Goats

Life on the Farm: The End of the Garden 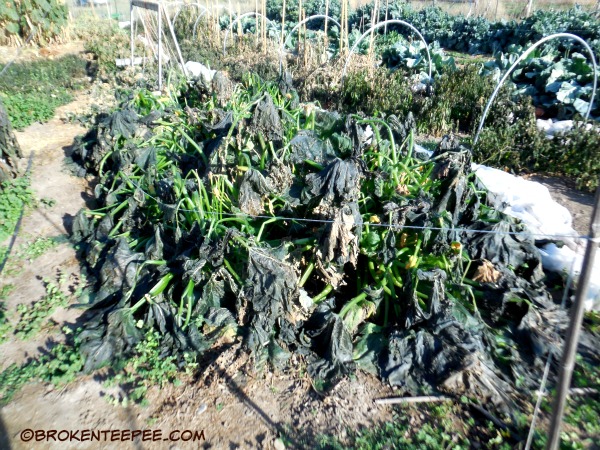 We have had a couple of frosts and they were enough to effectively bring the garden to an end. Thankfully, the zucchini is dead. I can’t begin to tell you how many came in but I do know he was giving them to me a dozen at a time. It was a good year for zucchini but I don’t think I’ve seen a bad year for them. I shred quite a few of them and packaged them for the freezer. I’ll add it to soup, meatloaf, waffles, and for zucchini bread. 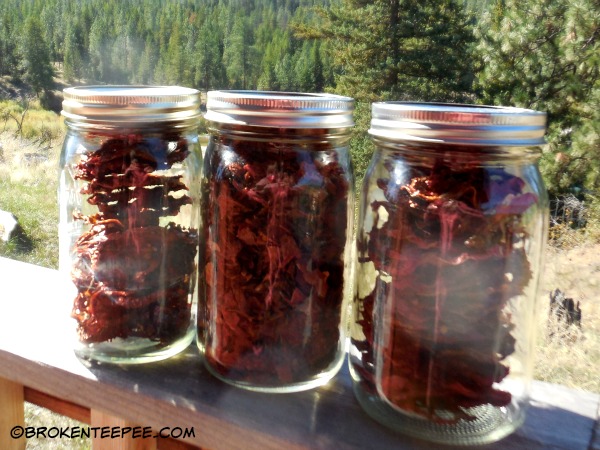 It was an exceptional year for tomatoes. Only our second bountiful year since we’ve been planting the garden. Most of them came in green and were packed into boxes in the basement. He’s been giving them to me as they ripen and I’ve been doing various things with them. I’ve dehydrated quite a few – I’ll have a post on the steps for the process in the next week or so. I made ketchup, tomato paste and tomato jam. I’ll be canning tomatoes tomorrow so I have them for soups, stews and one of my favorite winter meals, Tomato Beef. 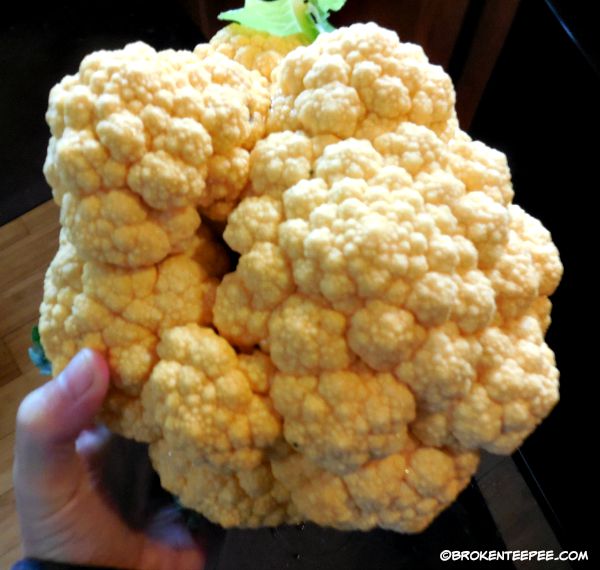 The only vegetable still growing is the cauliflower. It has done pretty well this year. I’ve got quite a bit in the freezer already and the hubby tells me there are several more heads to come in. Cauliflower doesn’t mind a frost – as long as it isn’t a killing frost so it’s happily growing away. It is orangish in color – it’s a hybrid called Cheddar cauliflower. I did a post on how to freeze cauliflower for anyone who feels emboldened to buy a bunch at the farmer’s market.

The broccoli didn’t do as well as the cauliflower and it started bolting pretty early. That was not good for us but very good for the goats. They LOVE broccoli plants. This is their favorite time of year because they get the plants from the garden. Once I’m given the go ahead from the hubby I start pulling them and treating my caprine friends. 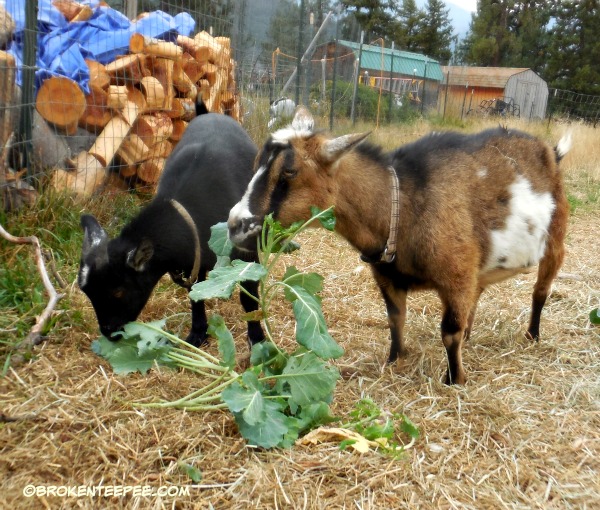 Pricilla was especially happy to get some even if she had to share with Debbie the goat. Pricilla just loves anything green and has been very excited each morning because she knows she will be getting a treat. 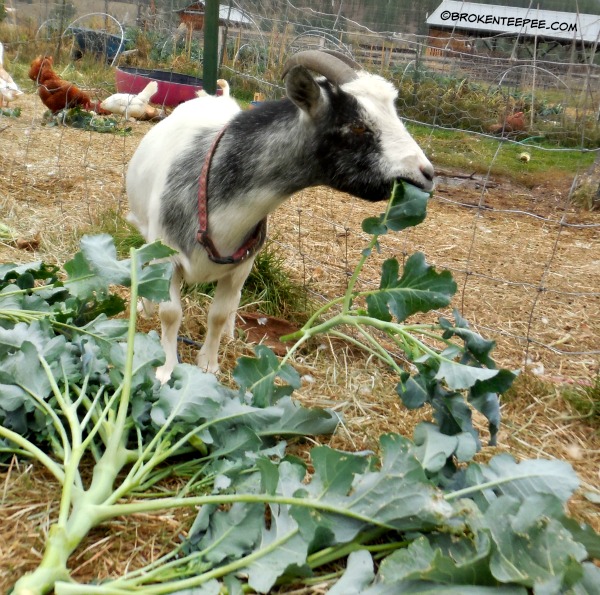 The other goats are just as joyful. I can hardly walk into the pen with the broccoli without being knocked over. 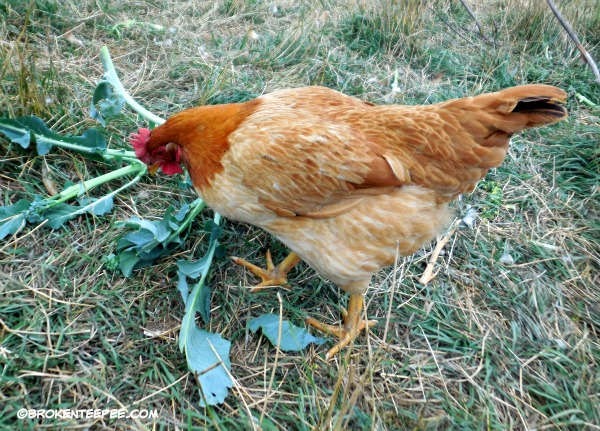 The goats aren’t the only ones. The chickens go after the plants with enthusiasm. Scarlet O’Henna dragged some off to the side so she could eat in peace. 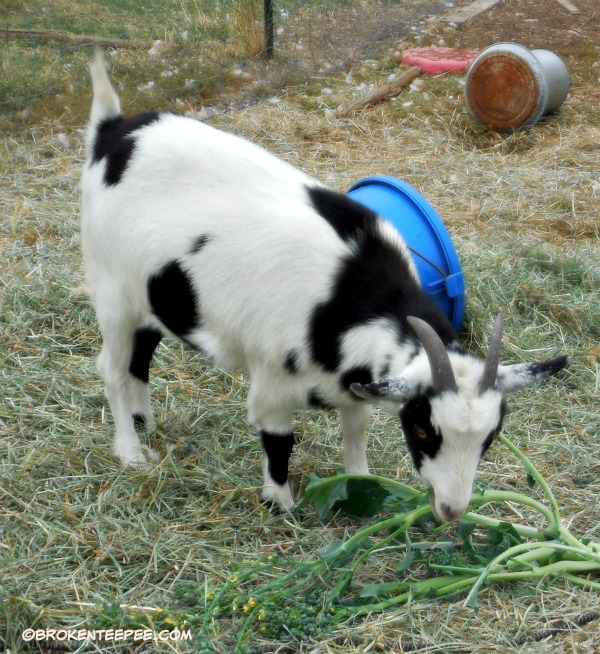 Nora the goat does not blame her. Nicky kept trying to steal her broccoli until I found her a quiet place to munch. These goats are ruthless when it comes to food. 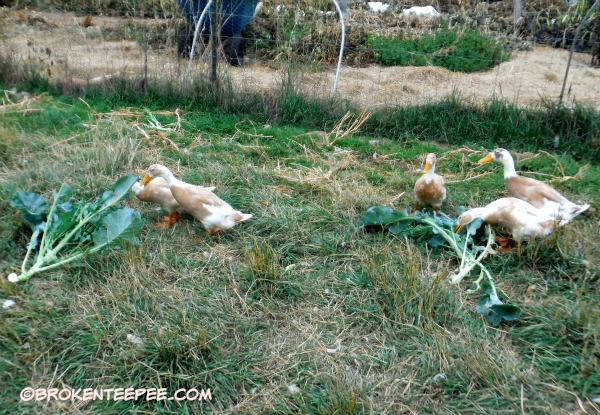 My biggest surprise was the Happy Ducks. Who knew ducks would like broccoli plants? Certainly not me! I took some video of them and posted it on Facebook:

Silly ducks. They do make me laugh! I hope they gave you a smile too.

I have to admit I’ll be happy to have this year’s garden behind me. As much as I love all of the fresh produce the work wears on me. I’m t.i.r.e.d. I should be finished with the tomatoes in the next day or so and then it’s just dealing with the cauliflower. I’m not complaining mind you – I have a winter’s worth of deliciousness ahead of me. I’m just ready for a day where I don’t have to cut, chop, freeze or can something.