Like Chaff in the Wind by Anna Belfrage – Blog Tour, Book Review and Giveaway #ChaffInTheWindVirtualTour 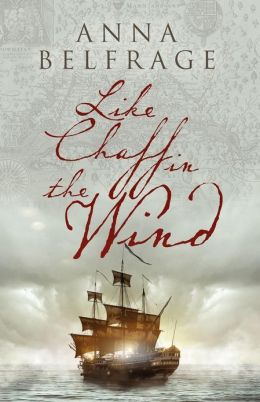 Matthew Graham committed the mistake of his life when he cut off his brother’s nose. In revenge, Luke Graham has Matthew abducted and transported to the Colony of Virginia, there to be sold as indentured labour – a death sentence more or less.

Matthew arrives in Virginia in May of 1661, and any hope he had of finding someone willing to listen to his tale of unlawful abduction is quickly extinguished. If anything Matthew’s insistence that he is an innocent man leads to him being singled out for the heaviest tasks.
Insufficient food, grueling days and the humid heat combine to wear Matthew down. With a sinking feeling he realises no one has ever survived the seven years of service – not on the plantation Suffolk Rose, not under the tender care of the overseer Dominic Jones.
Fortunately for Matthew, he has a remarkable wife, a God’s gift who has no intention of letting her husband suffer and die, and so Alex Graham sets off on a perilous journey to bring her husband home.

Alex is plagued by nightmares in which her Matthew is reduced to a wheezing wreck by his tormentors. She sits in the prow of the ship and prays for a miracle to carry her swiftly to his side, to let her hold him and heal him before it’s too late. God, however, has other things to do and what should have been a two month crossing becomes a yearlong adventure from one side of the Atlantic to the other.

Will she find him in time? And if she does, will she be capable of paying the price required to buy him free?


I was raised abroad, on a pungent mix of Latin American culture, English history and Swedish traditions. As a result I’m multilingual and most of my reading is historical – both non-fiction and fiction.

I was always going to be a writer – or a historian, preferably both. Instead I ended up with a degree in Business and Finance, with very little time to spare for my most favourite pursuit. Still, one does as one must, and in between juggling a challenging career I raised my four children on a potent combination of invented stories, historical debates and masses of good food and homemade cakes. They seem to thrive … Nowadays I spend most of my spare time at my writing desk. The children are half grown, the house is at times eerily silent and I slip away into my imaginary world, with my imaginary characters. Every now and then the one and only man in my life pops his head in to ensure I’m still there. I like that – just as I like how he makes me laugh so often I’ll probably live to well over a hundred.
I was always going to be a writer. Now I am – I have achieved my dream.

When I accepted this book for review I had no idea it was a time travel novel. I happen to love time travel novels so it didn’t bother me in the least – in fact it added a bit for me but for someone who doesn’t care for them it might have come as a bit of a shock. I knew this was a second book in a series and I’d not had the opportunity to read the first so I went in a bit blind. All that being said, Like Chaff in the Wind read like a stand alone book for me. I did not feel any great loss at not having read the first book in the series. I do however, very much want to read the next volume – The Prodigal Son. I have the first, A Rip in the Veil on my Nexus and will hopefully find some of the spare time people are always talking about and get around to
reading it.

Matthew and Alex are happily married but there is one major problem in their life – Matthew’s brother, Luke hates him with a blinding passion. Luke has Matthew kidnapped and sent to America as an indentured servant. Alex sets off to rescue him but runs into a series of delays so that she doesn’t get to him for over a year. He is on death’s door when she finally negotiates his “purchase” from his current bondholder with a payment she is loathe to make.

As they try to make their way back to Scotland the hatred of Matthew’s former owner and overseer as well as the continued threats from his brother get in the way of their quick return. Alex left their son in the hands of Matthew’s best friend and they are both anxious to see him again.

I really liked the characters in this book – well the likable ones anyway. The bad guys were really bad. Over the top bad to tell the truth and I didn’t understand the motivation for that level of hate. How many times is this brother going to keep at this? Perhaps this is why I need to read the first book…

That being written I did thoroughly enjoy the novel. With any time travel book a reader has to completely suspend any level of belief and just go with the story. This was basically a good story to be along with for a truly engaging ride.

You can see the Like Chaff in the Wind Tour Schedule

One lucky reader will win a paperback copy of Like Chaff in the Wind – open internationally. How do you win? It’s easy! Just hop on the Rafflecopter! Good luck everyone.


Disclosure:  I received a free copy of Like Chaff in the Wind from Historical Fiction Virtual Book Tours for my honest review. I received no compensation for this post.