I do have a soft spot for time travel novels so when given the opportunity to read The Lost Mata Hari Ring by Elyse Douglass I said yes as quick as I could. I thank Virtual Author Book Tours for sending me a copy at no charge for my honest review. 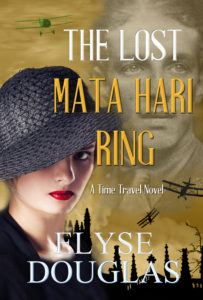 Up-and-coming actress, Trace Rutland, has had nightmares about a tragic past ever since she was a little girl. She struggles with her everyday life, finally seeking help from a hypnotherapist.

While under hypnosis, she inadvertently experiences a past life in Paris, in 1916, during the First World War.

Later, while visiting a wealthy man’s private Mata Hari collection, Trace is drawn to a glittering ring, once worn by the convicted spy.

Trace is enthralled. When she’s alone, she slips the ring on and is swiftly hurled into the past. There, she must face herself as she was in the past, while struggling to change the course of her destiny.

When she meets the handsome Edward Kenyon Bishop, a World War I British flying ace, she falls in love. She is soon swept away into a journey of suspicion and treachery, and must fight for her life.

Can she survive the past? Can she return to the present? Can true love endure for all time?

Elyse Douglas is the pen name for the husband and wife writing team of Elyse Parmentier and Douglas Pennington. Elyse began writing poems and short stories at an early age and graduated with a degree in English Literature. Douglas began writing novels in college, while studying music at the Cincinnati College Conservatory of Music. He traveled the world as a professional pianist for many years. He has also worked as a copywriter and corporate manager.

Trace has always had a specific nightmare and lately it has been bothering her to a point that it is impacting her ability to do her job. She is an actor on Broadway and the lack of sleep is affecting her performances. She decides to see a therapist and be hypnotized to see if that will help. What happens is beyond anything either of them expected.

Trace finds herself reliving the death of Mata Hari. As she goes through that trauma she realizes that she was Mata Hari in a past life and the nightmare that she has been having is related to her death at the hands of the French. She doesn’t know how to process this and the therapist she was seeing is so freaked that he just doesn’t want to see her again.

Trace doesn’t know what to do either but she does try to learn as much as she can about Mata Hari which leads her to a man who has a collection of Mata Hari memorabilia including an emerald ring that really calls to her. She feels compelled to try it on. When she does…POOF, she is transported back in time.

As with all time travel novels you have to just go with the conceit and enjoy the book for what it is. We all know that time travel isn’t real but isn’t it fun to pretend? This book takes the whole concept one step further by having the protagonist go back in time to her own past life. That is something I’ve never encountered before in my time travel reading.

I found The Mata Hari Ring to be a very engaging read. The characters were unique – at least the modern ones. I can’t say that I know enough about Mata Hari to know if she was portrayed accurately or not but for the purpose of this novel she seemed just right; a bit haughty, a bit self serving and a lot naive. I did not know she had a daughter so that was interesting to learn.

There was a lot to enjoy in the book. It had love, romance, adventure and history. It skipped right along and I found myself eagerly turning the pages. It’s not complicated and it’s not deep but it’s a great beach read for sure.

One lucky US reader will win a copy of The Lost Mata Hari Ring. You can choose either an ebook or a paperback. Just enter as many ways as you would like on the Gleam widget below. Full rules are on the widget. Good luck everyone 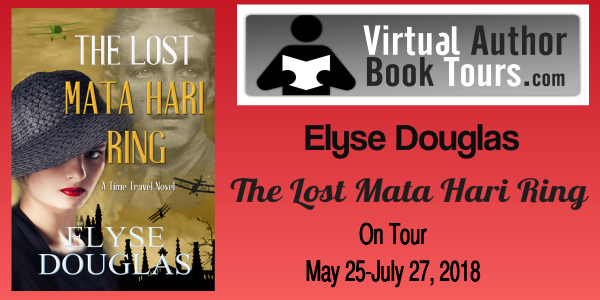