I received a free copy of Loving Eleanor for my honest review. 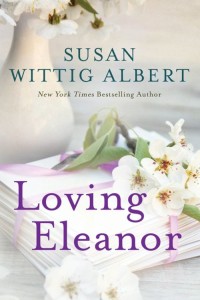 When AP political reporter Lorena Hickok—Hick—is assigned to cover Mrs. Franklin D. Roosevelt, the wife of the 1932 Democratic presidential candidate, the two women become deeply, intimately involved. Their relationship begins with mutual romantic passion, matures through stormy periods of enforced separation and competing interests, and warms into an enduring, encompassing friendship that ends only with both women’s deaths in the 1960s—all of it documented by 3300 letters exchanged over thirty years.

Now, New York Times bestselling author Susan Wittig Albert recreates the fascinating story of Hick and Eleanor, set during the chaotic years of the Great Depression, the New Deal, and the Second World War. Loving Eleanor is Hick’s personal story, revealing Eleanor as a complex, contradictory, and entirely human woman who is pulled in many directions by her obligations to her husband and family and her role as the nation’s First Lady, as well as by a compelling need to care and be cared for. For her part, Hick is revealed as an accomplished journalist, who, at the pinnacle of her career, gives it all up for the woman she loves. Then, as Eleanor is transformed into Eleanor Everywhere, First Lady of the World, Hick must create her own independent, productive life.

Drawing on extensive research in the letters that were sealed for a decade following Hick’s death, Albert creates a compelling narrative: a dramatic love story, vividly portraying two strikingly unconventional women, neither of whom is satisfied to live according to the script society has written for her. Loving Eleanor is a profoundly moving novel that illuminates a relationship we are seldom privileged to see and celebrates the depth and durability of women’s love.

Susan Wittig Albert is the award-winning, NYT bestselling author of the forthcoming historical novel Loving Eleanor (2016), about the intimate friendship of Eleanor Roosevelt and Lorena Hickok; and A Wilder Rose (2014), about Rose Wilder Lane and the writing of the Little House books.

Her award-winning fiction also includes mysteries in the China Bayles series, the Darling Dahlias, the Cottage Tales of Beatrix Potter, and a series of Victorian-Edwardian mysteries she has written with her husband, Bill Albert, under the pseudonym of Robin Paige.

She has written two memoirs: An Extraordinary Year of Ordinary Days and Together, Alone: A Memoir of Marriage and Place, published by the University of Texas Press.

Her nonfiction titles include What Wildness is This: Women Write About the Southwest (winner of the 2009 Willa Award for Creative Nonfiction); Writing from Life: Telling the Soul’s Story; and Work of Her Own: A Woman’s Guide to Success Off the Career Track.

She is founder and current president (2015-2017) of the Story Circle Network and a member of the Texas Institute of Letters.

This book was a revelation to me. I’d read other books on Eleanor Roosevelt – long ago – but I don’t recall her relationship with Lorena Hickok. Those books did deal with her life after she had become First Lady where this book starts long before that.

Lorena Hickok was a woman far ahead of her times; she was a female reporter who covered real news, not just the content for the style section. She pulled herself out of a very difficult childhood and pushed herself to do very well in what was traditionally a man’s domain. She was, originally against her wishes, assigned to cover Mrs. Roosevelt after Franklin won the race for Governor of New York. Lorena or Hick as she was known felt that the post was “women’s work” and she didn’t want to do it. Little did she know how much the posting would change her life.

Eleanor Roosevelt was little prepared to be First Lady of New York but she was a child of privilege and she was reared to do her duty. She preferred to do it quietly and out of the public’s eye and she managed that for the most part. She was a very shy woman. She and Hick entered into a very close relationship and Hick helped Eleanor become comfortable with dealing with the press as Franklin rose from Governor to President.

They wrote to each other almost daily – the book is based on their letters which were released to the public in 1998. There are over 3000 letters and they are both diaries of the activities of the First Lady but they also contain some very loving passages that seem to indicate a relationship between the women. Ms. Wittig runs with that relationship giving her reader a very  intimate look at a woman who is often remembered as a remarkable First Lady and less as a simple woman.

I found myself lost in the book – the history is well detailed and the relationship between the two women is very well developed without being overt. Franklin Roosevelt is not a major player in the book; he appears here and there rather as a Snidely Whiplash kind of set piece. This is Eleanor and Hick’s story. Truth be told – it’s Hick’s story.

I found myself researching Lorena Hickok after I finished reading this book because I found her to be such a fascinating woman. I think you would find her interesting too.

Three copies of Loving Eleanor by Susan Wittig Albert are up for grabs! To enter, please use the GLEAM form below.

– Giveaway ends at 11:59pm EST on May 31st. You must be 18 or older to enter.
– Giveaway is open to US & Canada residents only.
– Only one entry per household.
– All giveaway entrants agree to be honest and not cheat the systems; any suspect of fraud is decided upon by blog/site owner and the sponsor, and entrants may be disqualified at our discretion
– Winner has 48 hours to claim prize or new winner is chosen.