This tale of a madam from San Francisco in the late 19th century both intrigued and caused concern as to the promotion of a woman who exploited other women. I thank Historical Fiction Virtual Book Tours for sending me a copy of Madam in Silk by Gini Grossenbacher at no charge for my honest review. 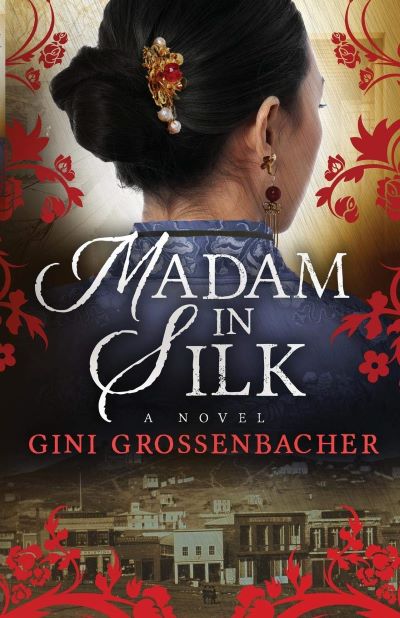 About Madam in Silk:

San Francisco, 1849. Despite her objections, Ah Toy and servant Chen arrive in San Francisco from Hong Kong after her husband dies aboard ship. With little cash and bound feet, she opens a “Lookee Shop,” catering to men who pay in gold dust to see her exotic beauty. Among them policeman John Clark finds her captivating and they form a strong attraction for one another. Yet should she place her trust in this one man? Will their love survive despite her frightening encounter with Sydney Ducks? After she opens a brothel, she and her girls face threats from rival madam Li Fan, the lure of opium dens, and a tempting offer of wealth and security from importer Henry Conrad. Armed with her mystical beliefs of the inner dragon and Goddess Mazu, Ah Toy faces much more than the journey from the ancient Chinese ways to the new American world. In fact, she must find the true source of courage in a life or death struggle for her own fate, justice, and dignity. Based on page-turning accounts from the life of one of San Francisco’s most legendary madams.

California author Gini Grossenbacher was a successful high school English teacher until she abandoned grades and term papers, choosing to write historical novels instead. Now she leads small writing groups and coaches other writers. She loves researching the history behind her novels, and enjoys traveling to the setting where they take place. Her hobbies include needlepoint, nature walks, and Scrabble. She lives in the Sacramento Valley where she grew up, east of San Francisco.

I am thoroughly enjoying my efforts in reading more books about American history. Most of my historical fiction has been in the realm of the English and French kingdoms. This year I have I have tried to stay on this continent. Madam in Silk tells the tale of Ah Toy, one of the first Chinese women in San Francisco. The novel is based on a real woman who came to San Francisco, lost her husband on the way over, and managed to become a wealthy woman. There are also records of her fighting for herself and for her business interests. The book was very well written and hard to put down, I just had some issues with the lionizing of a woman who basically subjugated other women to create her wealth.  Ms. Grossenbacher has a series of books about Madams. I don’t dispute her skill as a writer, I just wonder why she has chosen to highlight these women.

Ah Toy leaves China with her husband and companion/friend Chen. Her husband dies en route and when she lands she finds that the man whom had promised them jobs now has no jobs for them. He encourages her to return to China but she knows that if she does that she will be forced to marry her brother in law. That will only continue the abuse she suffered while married to her husband. She is determined to be free. But with little money, few skills and bound feet what can she do? She opens a “lookee” shop where men will pay to see her naked. One of her first customers is a police officer who forms an attraction to her and Ah finds herself liking him very much as well. Soon her business is booming and this brings her some unwanted attention.

Her brother in law has not forgotten her and sends someone to kidnap her but the plot is foiled. In order to stay on the good side of the local Chinese bosses she agrees to expand her business and open a brothel. As she navigates the changing times in the city, the anti-immigrant feelings that are growing and the threat from China Ah finds herself trying to also find love. Two men have expressed feelings for her but one has lied to her and other does not make her heart flutter. After her bad marriage in China does she want passion or security?

This was a detailed and descriptive book about life in San Francisco during the gold boom. Ms. Grossenbacher brings the city to life from the gritty port area to the shanties of little Canton. Her research shows in her depiction of the roving bands of thugs and the newly formed Vigilantes formed by the police to help keep the thugs in line. It was a time of great growth and much lawlessness. Ah Toy was a strong woman dealing with a raft of issues in a country that was completely alien to her. One has to respect the courage that took. It’s just sad that she felt that the only avenue open to her was the sex trade.

It’s a book that grabs you from the beginning and keeps you immersed until the very end.