I received a free copy of Madame Presidentess for my honest review. This post contains affiliate links – if you make a purchase I receive a small commission to help keep the Farm cats in treats. 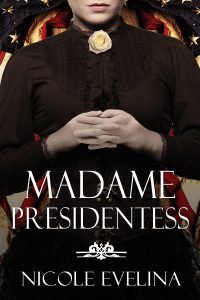 Forty-eight years before women were granted the right to vote, one woman dared to run for President of the United States, yet her name has been virtually written out of the history books.

Rising from the shame of an abusive childhood, Victoria Woodhull, the daughter of a con-man and a religious zealot, vows to follow her destiny, one the spirits say will lead her out of poverty to “become ruler of her people.”

But the road to glory is far from easy. A nightmarish marriage teaches Victoria that women are stronger and deserve far more credit than society gives. Eschewing the conventions of her day, she strikes out on her own to improve herself and the lot of American women.

Over the next several years, she sets into motion plans that shatter the old boys club of Wall Street and defile even the sanctity of the halls of Congress. But it’s not just her ambition that threatens men of wealth and privilege; when she announces her candidacy for President in the 1872 election, they realize she may well usurp the power they’ve so long fought to protect.

Those who support her laud “Notorious Victoria” as a gifted spiritualist medium and healer, a talented financial mind, a fresh voice in the suffrage movement, and the radical idealist needed to move the nation forward. But those who dislike her see a dangerous force who is too willing to speak out when women are expected to be quiet. Ultimately, “Mrs. Satan’s” radical views on women’s rights, equality of the sexes, free love and the role of politics in private affairs collide with her tumultuous personal life to endanger all she has built and change how she is viewed by future generations.

This is the story of one woman who was ahead of her time – a woman who would make waves even in the 21st century – but who dared to speak out and challenge the conventions of post-Civil War America, setting a precedent that is still followed by female politicians today.

Nicole Evelina is an award-winning historical fiction and romantic comedy writer. Her most recent novel, Madame Presidentess, a historical novel about Victoria Woodhull, America’s first female Presidential candidate, was the first place winner in the Women’s US History category of the 2015 Chaucer Awards for Historical Fiction.

Her debut novel, Daughter of Destiny, the first book of an Arthurian legend trilogy that tells Guinevere’s life story from her point of view, was named Book of the Year by Chanticleer Reviews, took the Grand Prize in the 2015 Chatelaine Awards for Women’s Fiction/Romance, won a Gold Medal in the fantasy category in the Next Generation Indie Book Awards and was short-listed for the Chaucer Award for Historical Fiction. Been Searching for You, her contemporary romantic comedy, won the 2015 Romance Writers of America (RWA) Great Expectations and Golden Rose contests.

This is a very timely book given the election this year ( I cannot wait for it all to be over!) Much has been made of the nomination of the first female candidate to major political party – major being the operative word. Victoria Woodhull was nominated for President back before women could even vote. While this book is fiction, it is based in fact. Ms. Woodhull ran for President in 1872 as the representative from the Equal Rights Party.  She wasn’t quite 35 yet so if she had won it might have caused her some problems – but it didn’t become an issue.

She was a woman ahead of her time. Given that women had few rights she was advocating for something we as a class have yet to fully achieve – equal rights. She clawed her way out of a less than pleasant childhood to marry (at 15!) and have two children but it was not an easy marriage. She divorced – which was not often done in those days. She did remarry and became a proponent of free love. Her first husband was not faithful and it was a time where, as I noted women had very few rights so her thoughts were basically – what’s good for the gander should be good for the goose. Her unusual thinking in this area did not bode well for her Presidential run as it was not the common thinking.

Ms. Evelina did an excellent job of bringing Ms. Woodhull’s world to life. There is much to be learned from this forward thinking woman and she is not well known. The book moves along, although there are a few slow spots and sometimes the dialog gets a bit over-dramatic. Beyond that this is a story rich in character and well worth reading as a testament to a strong woman who never gave up and didn’t let her rough start in life ruin her. She had some controversial beliefs and some scandal in her life but she was still a woman that should be remembered.

Other Books by Nicole Evelina:

You can read my review of Daughter of Destiny

You can read my review of Camelot’s Queen (Book Two)

You can purchase Daughter of Destiny on Amazon.com

You can purchase Camelot’s Queen on Amazon.com

One lucky US reader will win a copy of Madame Presidentess. Just enter as many ways as you would like on the Gleam widget below. Full rules are on the widget. Good luck everyone.