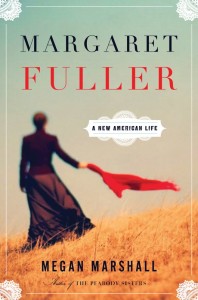 Hardcover: 496 pages
Publisher: Houghton Mifflin Harcourt (March 12, 2013)
From an early age, Margaret Fuller dazzled New England’s intelligent elite. Her famous Conversations changed women’s sense of how they could think and live; her editorship of the Dial shaped American Romanticism. Now, Megan Marshall, whose acclaimed The Peabody Sisters “discovered” three fascinating women, has done it again: no biography of Fuller has made her ideas so alive or her life so moving.
Marshall tells the story of how Fuller, tired of Boston, accepted Horace Greeley’s offer to be the New York Tribune’s front-page columnist. The move unleashed a crusading concern for the urban poor and the plight of prostitutes, and a hunger for passionate experience. In Italy as a foreign correspondent, Fuller took a secret lover; wrote dispatches on the brutal 1849 Siege of Rome; and gave birth to a son.
When all three died in a shipwreck off Fire Island shortly after Fuller’s 40th birthday, the sense and passion of her life’s work were eclipsed by tragedy and scandal. Marshall’s inspired account brings an American heroine back to indelible life.

MEGAN MARSHALL is the author of The Peabody Sisters, a finalist for the Pulitzer Prize. Her work has appeared in The New Yorker, Atlantic, New York Times Book Review, and Slate. A recipient of Guggenheim and NEH fellowships, Marshall teaches in the MFA program at Emerson College.

I went into this book with the barest knowledge of Margaret Fuller. I’m now a bit more educated as to this remarkable woman born into the wrong time. But perhaps she was needed then to help enlighten those who would take the spark of an idea that women were more than mothers, more than housewives and bring it forward to a time where such an idea could burst into a flame.

In reading of her early life, where her father “homeschooled” her and expected learning from a six year old that was nothing short of extraordinary I felt sorrow for the girl who never felt the love of a father, only his scorn when she did not live up to almost impossible expectations. She had something wrong with her spine – scoliosis maybe?  – that led to one shoulder being markedly higher than the other and she had migraines. I understand how debilitating they can be. But she pushed through. When he father died leaving the family with no income or savings it was up to her to provide and she did. In a time when women were not wage earners.

Margaret Fuller was also a woman of experiment; she belonged to the Trancendentalists where she had an ongoing give and take with Ralph Waldo Emerson. She ultimately worked for Horace Greeley and ended up in Italy where she may or may not have married the father of her one and only child. As she was coming home to the United States they were all killed in the shipwreck off of Fire Island, NY.

Ms. Marshall makes extensive use of Ms. Fuller’s writings to make her biography come together. How better to bring a person to life than through her own words? My issues were with the Margaret Fuller “might have, would have” suppositions that I suppose are the only way to suggest assumptions but they were too many for me. That being written, this was a well researched, fascinating look at a woman who was scorned in her time for behaviors that wouldn’t rate barely a smirk today. It’s a shame that Ms. Fuller didn’t know how much she truly was worth.

I am so glad that I chose to read this book. It was well organized, very well written and it has left me marveling over a woman wanting what was right for people, trying to find love and seeking the respect of family. Isn’t that what we all want?

You can see the Margaret Fuller: A New American Life Tour Schedule

You can purchase Margaret Fuller:  A New American Life on Amazon.com

One lucky reader (US/Can) will win a copy of Margaret Fuller:  A New American Life. How do you win? It’s easy! Just hop on the Rafflecopter.  Good luck everyone.

Disclosure:  I received a free copy of Margaret Fuller:  A New American Life from TLC Book Tours for my honest review. I received no compensation for this post.