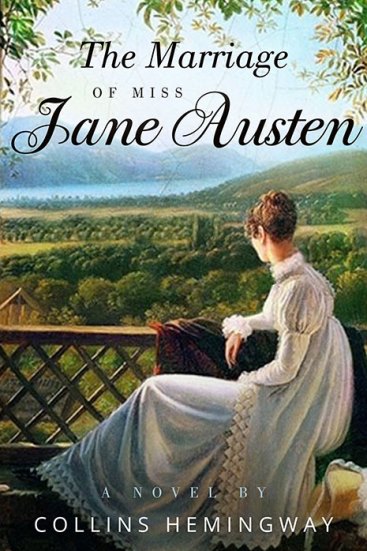 The Marriage of Miss Jane Austen: A Novel by a Gentleman Volume I
by Collins Hemingway

Everyone should marry once for love – Even Jane Austen

Jane Austen, single and seemingly comfortable in the role of clergyman’s daughter and aspiring writer in the early 1800s, tells friends and family to hold out for true affection in any prospective relationship. Everybody, she says, has a right to marry once in their lives for love.

But when, after a series of disappointing relationships, the prospect of true love arrives for her, will she have the courage to act? The Marriage of Miss Jane Austen re-imagines the life of England’s archetypal female by exploring what might have happened if she had ever married. It shows how a meaningful, caring relationship would have changed her as a person and a writer.

It also takes her beyond England’s tranquil country villages and plunges her info what the Regency era was really about: great explorations and scientific advances, political foment, and an unceasing, bloody war.

In such times, can love & marriage triumph?

“What if Austen, who penned so many classic love stories, found her own romantic match? Ashton Dennis fits right into the Austen universe, while this Jane remains true to life, an intelligent and determined young woman. The writing is Austen-ian, and Hemingway has a talent for witty banter and wry observations that would make Elizabeth Bennet proud. An enjoyable first novel in an imaginative, well-researched series.” Kirkus Reviews

“A skillful portrayal of a … literary icon takes this historical romance on an imaginative journey of the soul. Insight and intuition, along with meticulous research, have created a believable version of her character in this tender story of Ashton and Jane. Excellent character development enhances the plausibility of the scenario. Background, motivation, eccentricity everything that constitutes a personality allow these fascinating people to step off the pages in lifelike form. Julia Ann Charpentier, Foreword CLARION Reviews, 4 stars

“All readers of Jane Austen wonder what Jane’s life might have been like had she married, or had money. The Marriage of Miss Jane Austen explores these intriguing possibilities. It also depicts Austen in a rapidly changing world, connecting her to important aspects of the era-war, slavery, indistralization, and new modes of travel. Heminghway’s book raises many ‘what if’s’ in his thoughtful and thought-provoking portrayal of Jane Austen falling in love.” -Susannah Fullerton, author of A Dance with Jane Austen and Happily Ever After: Celebrating Jane Austen’s Pride and Prejudice

Whether his subject is literature, history, or science, Collins Hemingway has a passion for the art of creative investigation. For him, the most compelling fiction deeply explores the heart and soul of its characters, while also engaging them in the complex and often dangerous world in which they have a stake. He wants to explore all that goes into people’s lives and everything that makes tThe hem complete though fallible human beings. His fiction is shaped by the language of the heart and an abiding regard for courage in the face of adversity.

As a nonfiction book author, Hemingway has worked alongside some of the world’s thought leaders on topics as diverse as corporate culture and ethics; the Internet and mobile technology; the ins and outs of the retail trade; and the cognitive potential of the brain. Best known for the #1 best-selling book on business and technology, Business @ the Speed of Thought, which he coauthored with Bill Gates, he has earned a reputation for tackling challenging subjects with clarity and insight, writing for the nontechnical but intelligent reader.

Hemingway has published shorter nonfiction on topics including computer technology, medicine, and aviation, and he has written award-winning journalism.

Published books include The Marriage of Miss Jane Austen trilogy, Business @ the Speed of Thought, with Bill Gates, Built for Growth, with Arthur Rubinfeld, What Happy Companies Know, with Dan Baker and Cathy Greenberg, Maximum Brainpower, with Shlomo Breznitz, and The Fifth Wave, with Robert Marcus.

Hemingway lives in Bend, Oregon, with his wife, Wendy. Together they have three adult sons and three granddaughters. He supports the Oregon Community Foundation and other civic organizations engaged in conservation and social services in Central Oregon.

Monday, December 4
Kick Off at Passages to the Past

Wednesday, December 6
Excerpt at Encouraging Words from the Tea Queen

Thursday, December 7
Excerpt at What Is That Book About

Friday, December 8
Review at A Chick Who Reads
Review at Adventures Thru Wonderland

Monday, December 18
Review at History From a Woman’s Perspective

Wednesday, December 20
Review at Faery Tales Are Real
Feature at A Literary Vacation

Thursday, January 4
Feature at CelticLady’s Reviews
Review & Excerpt at Books of All Kinds

Thursday, January 11
Review at What Cathy Read Next

Friday, January 12
Review at Diary of an Eccentric
Interview at Jorie Loves a Story

During the Blog Tour we will be giving away two paperback copies of The Marriage of Miss Jane Austen! To enter, please enter via the Gleam form below.

ñ Giveaway ends at 11:59pm EST on January 12th. You must be 18 or older to enter.
ñ Giveaway is open to residents INTERNATIONALLY.
ñ Only one entry per household.
ñ All giveaway entrants agree to be honest and not cheat the systems; any suspect of fraud is decided upon by blog/site owner and the sponsor, and entrants may be disqualified at our discretion.
ñ Winner has 48 hours to claim prize or new winner is chosen.

The Marriage of Miss Jane Austen