I enjoy historical fiction as you know. When offered a book that combines current times, history and a bit of the mystical it’s a great change from my normal reading. I was very happy to receive a free copy of The Memory Painter from TLC Book Tours for my honest review. 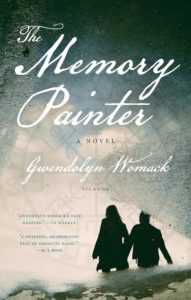 What if there was a drug that could help you remember past lives?

What if the lives you remembered could lead you to your one true love?

What if you learned that, for thousands of years, a deadly enemy had conspired to keep the two of you apart?

Bryan Pierce is an internationally famous artist, whose paintings have dazzled the world. But there’s a secret to Bryan’s success: Every canvas is inspired by an unusually vivid dream. Bryan believes these dreams are really recollections – possibly even flashbacks from another life – and he has always hoped that his art will lead him to an answer. And when he meets Linz Jacobs, a neurogenticist who recognizes a recurring childhood nightmare in one Bryan’s paintings, he is convinced she holds the key.
Their meeting triggers Bryan’s most powerful dream yet – visions of a team of scientists who, on the verge of discovering a cure for Alzheimer’s, died in a lab explosion decades ago. As his visions intensify, Bryan and Linz start to discern a pattern. But a deadly enemy watches their every move, and he will stop at nothing to ensure that the past stays buried.

Gwendolyn Womack began writing plays in college and majored in Theatre at the University of Alaska, Fairbanks. She received an MFA in Directing Theatre and Film from California Institute of the Arts and currently lives in Los Angeles with her family. The Memory Painter is her first novel.

Bryan is a reclusive artist who paints his dreams. He has started showing his paintings in hopes that someone will recognize them for what they are and hopefully help him. For he has been having these dreams all of his life and despite his mother sending him to psychiatrists and hospitals no one has been able to explain why he descends into this dream world. He ultimately figures out that he is reliving and absorbing past lives; he awakens with the memories, feelings, knowledge and language of the person about whom he is dreaming.

One day he meets Linz and feels an instant connection. They flirt a bit and she unknowingly goes to an exhibit of his work her friends are promoting. There she sees one of his works that depicts a dream she has had since childhood. She needs to know how he knows the details of her dream. She doesn’t know at this point that the artist is the man she was flirting with earlier.

As Bryan realizes that Linz is essential to his understanding what causes his dreams he tries to get her to understand what he experiences but she is skeptical. She does not want to believe that it can be past lives. But as time goes on she has no choice but to see that she and Bryan have been connected for a very long time.

I was hooked with this book from the very first page. The whole concept of the book is really unique and it kept my interest. I totally enjoyed the forays into the past to explore Bryan’s past lives. The idea of meeting the same soul over and over throughout time albeit in different  human forms is intriguing and very Karmic. The  reason for the whole plot payoff is quite fascinating and the ending set up for the possibility of a sequel which would be most welcome. I’d like to see how the characters go on to finish their journey together through time.

Other Books by Gwendolyn Womack: