I don’t read a lot of books that take place in the present but once in a while a synopsis will make me curious. Mercy House by Alena Dillon did just that with its tale of modern day nuns running a place of shelter for abused women in New York. I thank TLC Book Tours for sending me a copy at no charge for my honest review. 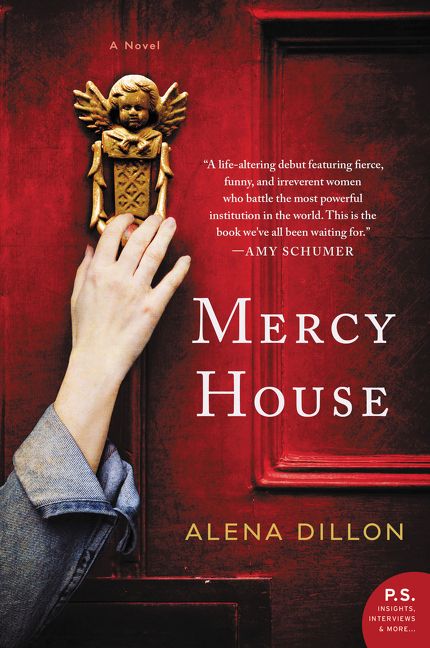 “Never underestimate the power of a group of women. Fierce, thoughtful and dramatic—this is a story of true courage.” —Susan Wiggs, New York Times bestselling author

She would stop at nothing to protect the women under her care.

Inside a century-old row house in Brooklyn, renegade Sister Evelyn and her fellow nuns preside over a safe haven for the abused and abandoned. Gruff and indomitable on the surface, warm and wry underneath, little daunts Evelyn, until she receives word that Mercy House will be investigated by Bishop Hawkins, a man with whom she shares a dark history. In order to protect everything they’ve built, the nuns must conceal many of their methods, which are forbidden by the Catholic Church.

Evelyn will go to great lengths to defend all that she loves. She confronts a gang member, defies the church, challenges her own beliefs, and faces her past. She is bolstered by the other nuns and the vibrant, diverse residents of the shelter—Lucia, Mei-Li, Desiree, Esther, and Katrina—whose differences are outweighed by what unites them: they’ve all been broken by men but are determined to rebuild.

Amidst her fight, Evelyn discovers the extraordinary power of mercy and the grace it grants, not just to those who receive it, but to those strong enough to bestow it.

You can purchase Mercy House at Harper Collins

Alena Dillon’s work has appeared in Slice Magazine, The Rumpus, and Seventh Wave, among others. She earned her MFA from Fairfield University. Mercy House is her debut novel. She lives on the north shore of Boston with her husband, son, and their black labrador, Penny.

I will note that I was brought up Catholic but lost my faith a long, long time ago. That doesn’t mean I don’t find tales of nun, priests and their exploits still interesting. This book is so much more in that it is more of a story about the subtle abuses the church inflicts upon the women that serve it. Maybe not so subtle. These women dedicate their lives to their God and to the church and yet the Church sees them as less than second class citizens. No compunction about just tossing them to the fates rather than supporting them. But off of my soapbox and on to the book.

Sister Evelyn is an older nun who was basically given to the church by her father for the safe return of his son from the war. It’s an Irish Catholic thing….She was indoctrinated from her earliest years that this was her fate and so she felt she had no choice. Her parents dropped her at the convent (pre Vatican II – if you are not Catholic a lot of this book isn’t going to make sense. But prior to the changes put through with this council in 1965 with Pope John XXIII nuns were severly limited. Well, a lot changed. The Mass was said in English. Woo hoo – it had been said in Latin. Way to make it user friendly, eh? As an aside, I remember my first Mass in English, with responses. I got scared. I didn’t know what was going on.

Nuns could stop wearing habits and became more socially concious. This is how we meet Sister Evelyn and her fellow nuns at Mercy House. It’s a refuge for abused women in Bedford Stuyvesant, Brooklyn, NY. Women can come at any time of day or night and they are given a safe place to stay/hide/rest/pray/recover.

The book revolves around Sister Evelyn but there is a cast of very diverse and interesting characters from the holy to the very profane. It was a very compelling story and one I read in basically one sitting. The nuns and the residents of Mercy House all have interesting stories to share and it’s worth spending the time with them. If you are not Catholic you can just ignore the references to Vatican II or there is the google. At it’s heart this is a story about women, the strength they have and the crap they have to put up with in life – whether the woman is a nun or not.