I have sworn off WWI and WWII books as I just read too many of them and I just can’t go there any more. Metropolis by Ellie Midwood takes place in between the two wars so very little Nazi talk. I thank Historical Fiction Virtual Book Tours for sending me a copy at no charge for my honest review. 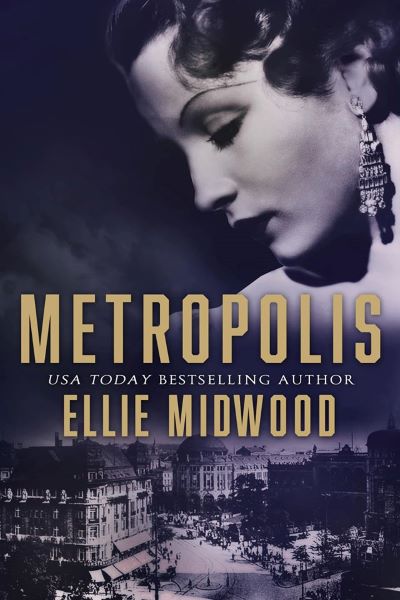 Unemployed actors, profiteers, cabaret girls, and impoverished aristocracy – out of this wild set of characters populating Weimar Berlin, Margarete Gräfin von Steinhoff belongs to the latter category. Having lost everything due to hyper-inflation, she considers jumping into the freezing waters of the Spree rather than facing the humiliating existence shared by millions of her fellow Germans. However, a chance meeting makes her change her mind at the last moment and offers her a chance to rely on the help of the metropolis itself, where anything can be sold and bought for money and where connections are everything. The bustling nightlife of cosmopolitan Berlin, with its casinos and dance halls, brings good income for the ones who don’t burden themselves too heavily with morals.

After a New Year’s Eve party, Margot finally meets her ever-absent and mysterious neighbor, Paul Schneider, who makes a living by producing a certain type of film for his rich clientele. Under his guidance, Margot discovers a new passion of hers – photography and soon, her talents are noticed by the prominent newspaper, Berliner Tageblatt itself. But being an official photographer of the most celebrated events of the La Scala and most famous Berlin theaters no longer satisfies Margot’s ambitions. As soon as the chance presents itself for her to get involved with the cinematography on the set of “Metropolis” – the film with the highest budget ever produced by the UFA – Margot jumps at it, without thinking twice. At the same time, Paul becomes involved with a rival project, “The Holy Mountain,” which stars an as yet unknown actress and an emerging director in, Leni Riefenstahl. As the two women meet, professional rivalry soon turns into a true friendship, fueled by their passion for cinematography. However, due to the economic woes facing Germany, both projects soon run out of money and now, both film crews must go to extreme lengths to save their respective productions.

Set against the backdrop of a decadent, vibrant, and fascinatingly liberal Weimar Berlin, “Metropolis” is a novel of survival, self-discovery, and self-sacrifice, in the name of art, love, and friendship.

Ellie Midwood is a USA Today bestselling and award-winning historical fiction author. She owes her interest in the history of the Second World War to her grandfather, Junior Sergeant in the 2nd Guards Tank Army of the First Belorussian Front, who began telling her about his experiences on the frontline when she was a young girl. Growing up, her interest in history only deepened and transformed from reading about the war to writing about it. After obtaining her BA in Linguistics, Ellie decided to make writing her full-time career and began working on her first full-length historical novel, “The Girl from Berlin.” Ellie is continuously enriching her library with new research material and feeds her passion for WWII and Holocaust history by collecting rare memorabilia and documents.

In her free time, Ellie is a health-obsessed yoga enthusiast, neat freak, adventurer, Nazi Germany history expert, polyglot, philosopher, a proud Jew, and a doggie mama. Ellie lives in New York with her fiancé and their Chihuahua named Shark Bait.

Berlin in the Weimar period was a complicated place; people from all walks of life were living on the edge as high inflation was making it for all but the very, very rich or very, very connected to be able to afford just about anything. It is against this backdrop that we meet Margot and Ernst – both on a bridge making trying to decide whether to make that final decision. Fortunately Margot and Ernst meet and they forge a friendship that brings both of them back from that brink. Margot is a countess but it counts for little in this new society and Ernst is a pianist. Fortunately for both of them Margot wrangles them a job entertaining at a variety of parties and at a club so that they both reach a state of reasonable financial security. They move into an apartment building and settle into a routine. They get to know all of their neighbors but for a mysterious photographer named Paul who comes and goes.

Margot is actually enjoying her new life and as the New Year turns she finally meets the mystery man and this really changes her life as she finds her true passion – photography. Under Paul’s tutelage she learns about light and angles. Margot soon finds a job as the photographer for th newspaper which works well for Ernst has left and she is now free to follow her new passion. It soon leads her to working on a film set. But she and Paul are getting concerned about the rise of the Nazi Party.

I did enjoy this book even though some of the topics were a bit dark. It’s a period in history that I don’t explore very often. Ms. Midwood has created a fascinating cast of characters to populate her little corner of Berlin. She manages to mix the fictional people with the real quite well and the result is a story that makes you root for the band of people living together and trying to survive in a difficult time. This is Margot’s story but she is surrounded by a wide variety of people with an assortment of issues.

The research into the time from the difficulties faced by the country after WWI to the seediness of the clubs is very evident and yet woven expertly into the story to make it hard to put down. As much as I despair for what comes next I do want to continue to follow Margot and Paul as they enter the next stage of their lives and life under Hitler.

If you are intrigued about the film industry in the time before “talkies” the peak into the making of Metropolis is enlightening. The look into this time period before the rise of the Nazi party is not always easy reading but as with the dark side of history it needs to be read.