Every so often I like to suspend reality and read a book that stretches the bounds of what we think we know. I thank TLC Book Tours for sending me a copy of Midnight at the Tuscany Hotel by James Markert at no charge for my honest review. 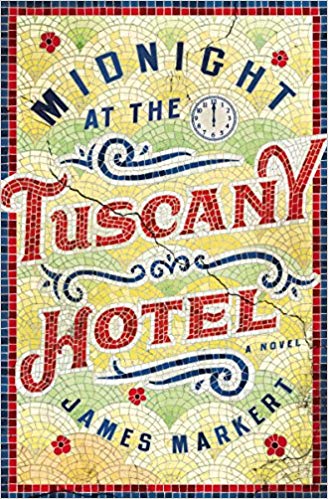 About Midnight at the Tuscany Hotel:

A once-beloved hotel and a fountain whose water suddenly can restore lost memories. But is it a miracle, or are there strings attached?

The Tuscany Hotel was once a haven for young artists. A place full of inspiration and a work of art in and of itself, the hotel was built by Robert Gandy for his wife, Magdalena: a woman of beauty beyond description who was orphaned as an infant in Florence and grew up without the ability to remember. A tragedy caused the hotel to close its doors, however, and it has been years since the fountain in the courtyard ran with water and inspiration.

Vitto Gandy, Robert’s son, returns from the horrors of World War II to a wife who fears him, a son who is too young to remember him, and a father whose memory of him is fading. As Vitto faces the memories that torture his heart and mind, his father runs off in the night to seek solace in the last place he was happy: the Tuscany Hotel. Instead of finding ruins, he discovers that the water in the fountain has begun to run again. And as he drinks it, his memory returns.

Filled with Alzheimer’s patients hoping for restored memories rather than artists longing for inspiration, the hotel is once again a source of life and art. But nothing is truly as good as it seems, and the mysterious gift of the hotel comes with a price that each must determine they’re willing to pay. Bursting with beauty, art, and inspiration, Midnight at the Tuscany Hotel is a story of parent and child, husband and wife, and the joy and pain of what it means to be alive.

James Markert lives with his wife and two children in Louisville, Kentucky. He has a history degree from the University of Louisville and won an IPPY Award for The Requiem Rose, which was later published as A White Wind Blew, a story of redemption in a 1929 tuberculosis sanatorium, where a faith-tested doctor uses music therapy to heal the patients. The Angels’ Share is his second novel, and he is currently working on his next historical, All Things Bright and Strange. James is also a USPTA tennis pro, and has coached dozens of kids who’ve gone on to play college tennis in top conferences like the BIG 10, the Big East, and the ACC.

Read my FIVE STAR review of What Blooms From Dust

Vitto Gandy comes home from the war (WWII) to a family that has been changed; his son does not know him, his father is suffering from dementia and his wife is far stronger than she ever was from having to deal with everything in his absence. He too has been been inexorably altered by his experiences – no man goes to war and comes back the same. The horrors he witnessed between the Nazi death camps and the battles are haunting his dreams. One night in the middle of a war nightmare he does something he cannot forgive himself for so he goes for help. The help he receives at the hospital is, by today’s standards, downright frightening. While there he meets another soldier who is also suffering from the psychological effects of the war and the two of them will ultimately end up helping each other.

Vitto’s parents also have quite a story to tell; his mother is an orphan from Italy. As for his father, he is a highly regarded sculptor in the Renaissance style. Growing up his mother loved to tell him the great mythological tales of the Greeks. Vitto inherited much from his parents – his memory was photographic and he is a painter of equal renown.

His parents created an artist’s paradise in California at their Tuscany Hotel. People came from all over the world to just stay, relax and concentrate on their craft whether it be painting, music or writing. It was a haven until darkness came to the hotel; a reporter fell from the cliffs to his death and Vitto’s mother also fell to her death. Or did she jump? Her body was never found and the question was never really answered. This haunted Vitto throughout his childhood and it haunts him still.

There is so much going on in this book and as in the last book I read of Mr. Market’s, he keeps all of his characters and plot points rolling along in eminently readable fashion. There are stories on multiple levels and they move up, down and in and out of various realities. It’s a book you have to read with a bit of attention but that attention is well rewarded in the end.

Midnight at the Tuscany Hotel took me a little to get into but once I did I couldn’t put it down. I found myself lost in the various love stories, the Greek mythology and the feeling of hope that the story provided. This book also had me crying which I haven’t done in quite a while.