I venture back into my favorite genre with an historical fiction book thanks to TLC Book Tours who sent me Midnight Blue by Simone van der Vlugt at no charge for my honest review. 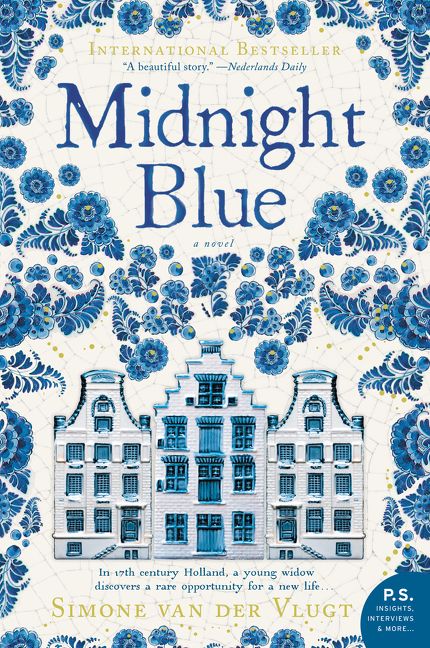 From Simone Van Der Vlugt comes her European bestselling novel of a young woman’s rise as a painter in Holland’s Golden Age—perfect for readers of The Miniaturist, Tulip Fever, and Girl with a Pearl Earring.

Amsterdam 1654: against the backdrop of Holland’s Golden Age, a dangerous secret threatens to destroy a young widow’s new life.

Following the sudden death of her husband, twenty-five-year old Catrin leaves her small village and takes a job as a housekeeper to the successful Van Nulandt merchant family. Amsterdam is a city at the peak of its powers: science and art are flourishing in the Golden Age and Dutch ships bring back exotic riches from the Far East. Madam Van Nulandt passes her time taking expensive painting lessons from a local master, Rembrandt van Rigin, and when Catrin takes up a brush to finish some of her mistress’s work, Rembrandt realizes the maid has genuine talent, and encourages her to continue.

When a figure from her past threatens her new life, Catrin flees to the smaller city of Delft. There, her gift as a painter earns her a chance to earn a living painting pottery at a local workshop. Slowly, the workshop begins to develop a new type of pottery to rival fancy blue-on-white imported Chinese porcelain—and the graceful and coveted Delft Blue designs she creates help revolutionize the industry. But when tragedy strikes, Catrin must decide whether to defend her newfound independence, or return to the village that she’d fled.

Simone van der Vlugt is an acclaimed Dutch novelist, whose books have sold more than two million copies. She lives with her husband and two children in Alkmaar. Midnight Blue is her first novel to be published in the United States.

Catrin did not marry well but women in her time were expected to marry. When her husband dies she sells off what is left of their belongings and decides to go to a larger town to work as a housekeeper. She just needs to experience more of life than milking the cows and keeping a house. Her original plans don’t work out but she is lucky and another opportunity presents itself and she finds herself working for wealthy family. Best luck of all – the mistress spends all her day painting and painting is Catrin’s secret passion.

But all is not to be easy and simple for Catrin for there are things from her past that she would rather forget and someone from her old town has blown in like an ill wind. She decides she must move on but fortunately her employer has a brother so he sends her to him to see if he needs help. He does have ulterior motives though, as he has seen Catrin’s painting ability and his brother has a pottery in Delft.

Catrin settles in to working at the pottery and becomes a popular member of the town but dangers await from both external threats and those she considers friends. The events from her past are still simmering and could boil over and burn her.

I enjoyed this book. But I will note that at many times I forgot I was reading an historical novel.  Catrin seemed a woman more of modern times than of the 17th century. The characters were well developed and captivating but unlike other historical novels I’ve read the feeling of being grounded in time and place just wasn’t present in this book and it would almost startle me at times to come upon a reminder that I wasn’t reading a more contemporary book.

Midnight Blue does include references to period events and individuals such as Johannes Vermeer, Rembrandt and the explosion at the armory known to history as the Delft Thunderclap. Catrin’s interest in painting was not unheard of for a woman of her time but it was unusual.

Overall it was a good read and I found the book to be full of twists and turns that surprised me. The ending was a little bit, oh I don’t know if flat or rushed is the better word but it left me just a touch unsatisfied. Maybe that’s the difference from one culture to the next but I just wanted a little more. Or maybe it was just me. Who knows. But it was a good read.