I received a free copy of Miss Benson’s Beetle in my Once Upon a Book Club Box. Be sure to check out my review of this subscribtion book club.

All Amazon links are affiliate links. If you make a purchase through them I receive a small commission (at no additional cost to you) 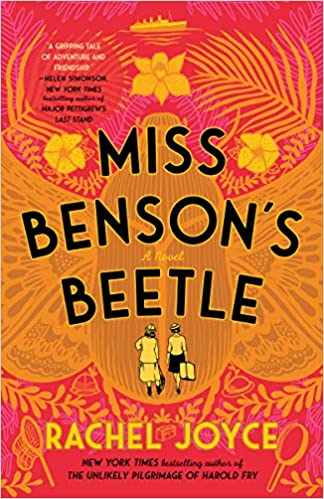 She’s going too far to go it alone.

It is 1950. London is still reeling from World War II, and Margery Benson, a schoolteacher and spinster, is trying to get through life, surviving on scraps. One day, she reaches her breaking point, abandoning her job and small existence to set out on an expedition to the other side of the world in search of her childhood obsession: an insect that may or may not exist—the golden beetle of New Caledonia.

When she advertises for an assistant to accompany her, the woman she ends up with is the last person she had in mind. Fun-loving Enid Pretty in her tight-fitting pink suit and pom-pom sandals seems to attract trouble wherever she goes. But together these two British women find themselves drawn into a cross-ocean adventure that exceeds all expectations and delivers something neither of them expected to find: the transformative power of friendship.

Rachel Joyce is the author of The Music Shop, the Sunday Times and international bestsellers The Unlikely Pilgrimage of Harold Fry, Perfect, and The Love Song of Miss Queenie Hennessy, as well as the digital short story A Faraway Smell of Lemon and a story collection, A Snow Garden & Other Stories. Her books have been translated into thirty-six languages and two are in development for film. The Unlikely Pilgrimage of Harold Fry was shortlisted for the Commonwealth Book Prize and longlisted for the Man Booker Prize.

Joyce was named the Specsavers National Book Awards “New Writer of the Year” in December 2012 and shortlisted for the “UK Author of the Year” 2014. Joyce has also written more than thirty original afternoon plays and adaptations of the classics for BBC Radio 4, including all the Brontë novels. She moved to writing after a long career as an actor, performing leading roles for the RSC, the National Theatre, and Cheek by Jowl. She lives with her family in Gloucestershire.

Miss Benson’s Beetle is quite different from any book I have read in a while. The main character, Margery Benson has reached a point in her life where the privations of the World War and her middle age have led her to decide to chase down a dream from her childhood – a golden beetle yet to be found. Her father told her stories of its supposed existence of this mythical insect. Did it exist or was it a figment of someone’s dreams?

One day Margery loses it at work and she leaves on bad terms but it does start her on her way to her big expidition. She places an ad for someone to accompany her. One man appears to have all the right qualifications but something is a little bit off. Then a young woman applies and while she is all wrong for the job they end up going together. What Margery doesn’t know is this woman, Enid Pretty, needs to get away and doesn’t care how she does it. She knows nothing about beetles and nothing about expeditions. But somehow these two women make it work.

What follows is one of the oddest and yet more interesting books I have read in a while. It’s full of quirky characters and a really charming story. It’s not perfect – some of it felt a little bit forced – but for the most part I was enthralled with this tale.

Margery is such a wonderful character, one I really could get behind and cheer for. I truly liked her and despite some of her quirks I really wanted the best for her. She was the kind of character you want good things to happen to. I truly enjoyed how she was written.

One of the author’s other books is on my shelf and now want to add some others to read at a later date. Anyone who likes out of the box characters and stories that don’t follow the ordinary will find this book enjoyable. I didn’t know what to expect going in and I was so happy by the time I finished.