I am happy to help celebrate the paperback release of Monticello by Sally Cabot Gunning. Harper Collins through TLC Book Tours sent me a free copy for my honest review. 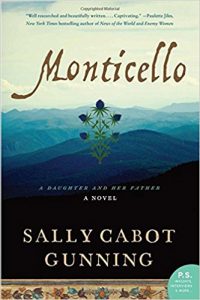 About Monticello: A Daughter and Her Father

From the critically acclaimed author of The Widow’s War comes a captivating work of literary historical fiction that explores the tenuous relationship between a brilliant and complex father and his devoted daughter—Thomas Jefferson and Martha Jefferson Randolph.

After the death of her beloved mother, Martha Jefferson spent five years abroad with her father, Thomas Jefferson, on his first diplomatic mission to France. Now, at seventeen, Jefferson’s bright, handsome eldest daughter is returning to the lush hills of the family’s beloved Virginia plantation, Monticello. While the large, beautiful estate is the same as she remembers, Martha has changed. The young girl that sailed to Europe is now a woman with a heart made heavy by a first love gone wrong.

The world around her has also become far more complicated than it once seemed. The doting father she idolized since childhood has begun to pull away. Moving back into political life, he has become distracted by the tumultuous fight for power and troubling new attachments. The home she adores depends on slavery, a practice Martha abhors. But Monticello is burdened by debt, and it cannot survive without the labor of her family’s slaves. The exotic distant cousin she is drawn to has a taste for dangerous passions, dark desires that will eventually compromise her own.

As her life becomes constrained by the demands of marriage, motherhood, politics, scandal, and her family’s increasing impoverishment, Martha yearns to find her way back to the gentle beauty and quiet happiness of the world she once knew at the top of her father’s “little mountain.”

Sally Cabot Gunning lives with her husband in Brewster on Cape Cod, Massachusetts, where her roots go back over three centuries. She came to writing at a young age, driven to it in desperation one rainy day when she ran out of books. Today Gunning focuses on digging out the back story to the history that we thought we knew but didn’t, and giving it a human face. She is the author of three historical novels set in New England during the tempestuous years that led up to the American Revolution: The Widow’s War, Bound, and The Rebellion of Jane Clarke, and writing as Sally Cabot, Benjamin Franklin’s Bastard. Her latest novel — Monticello: A Daughter and Her Father — was released September 2016.

Monticello, the estate plays as large a role in this novel as does Martha Jefferson Randolph and Thomas Jefferson. The book ostensibly belongs to Martha – it is her story of love, frustration and duty.

When the book opens the Jeffersons are returning from France to return to their beloved home of Monticello. But after the sophistication of Europe does it look a little….shabby? It matters little to Martha as she has always found comfort there. Her only troubles come from the owning of slaves; she is not happy about it and while in France her father had discussed with her the possibility of freeing those that they had but once home the economics of running the plantation would not allow for it.

Soon life settles back into a rhythm and a young man comes calling. He, too wishes that slaves were not necessary and as their courtship progresses they talk of living on a small place where they could run it without the labor of slaves. Thomas Mann Randolph soon marries Martha and his troublesome father gifts him a plantation in an area that Martha finds unpleasant but she moves and works as hard as she can to make it work. But as she gets close to delivering with each of her children she returns to her beloved Monticello for delivery.

Martha’s life is closely bound to her father’s as he becomes Vice President, then President. She cared for him closely an also helped him at times at the White House being a de facto First Lady. She did this while also managing a household and bearing 12 children. Monticello was always her place of refuge.

As I noted the plantation plays as much of a role as any living person. It’s a vital presence in the book and Ms. Cabot depicts it in a very loving way. She does not spare her characters from their flaws – I must admit that Martha is not at likable nor at times is Mr. Jefferson. Don’t even get me started on Mr. Randolph. I really need to further learn about him to see if he was as much of a waste as he was depicted. Poor Martha….in having to deal with him was the only time I had any sympathy for her.

The book is well researched and I found it very interesting. American history is not my strong suit and I did learn a little about Martha in a previous read so she wasn’t totally unknown to me. I did learn far more about Mr. Jefferson and his beautiful home. It’s certainly a book worth reading and an interesting look at a founding father who was uncomfortable with slavery while sleeping with the help.

One lucky US reader will win a copy of Monticello. Just enter as many ways as you would like on the Gleam widget below. Full rule are on the widget. Good luck everyone.