I received a free copy of When the Moon is Low from TLC Book Tours for my honest opinion. 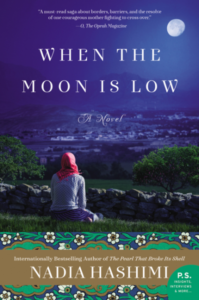 Mahmoud’s passion for his wife Fereiba, a schoolteacher, is greater than any love she’s ever known. But their happy, middle-class world—a life of education, work, and comfort—implodes when their country is engulfed in war, and the Taliban rises to power.

Mahmoud, a civil engineer, becomes a target of the new fundamentalist regime and is murdered. Forced to flee Kabul with her three children, Fereiba has one hope to survive: she must find a way to cross Europe and reach her sister’s family in England. With forged papers and help from kind strangers they meet along the way, Fereiba make a dangerous crossing into Iran under cover of darkness. Exhausted and brokenhearted but undefeated, Fereiba manages to smuggle them as far as Greece. But in a busy market square, their fate takes a frightening turn when her teenage son, Saleem, becomes separated from the rest of the family.

Faced with an impossible choice, Fereiba pushes on with her daughter and baby, while Saleem falls into the shadowy underground network of undocumented Afghans who haunt the streets of Europe’s capitals. Across the continent Fereiba and Saleem struggle to reunite, and ultimately find a place where they can begin to reconstruct their lives.

Nadia Hashimi is a pediatrician of Afghan descent. Both her parents left Afghanistan in the early 1970s and settled in the United States to chase the American dream. Her debut novel, The Pearl That Broke Its Shell, was an international bestseller. She lives with her family in Maryland.

This is a very timely book given the refugee situation in Europe as it is the story of family fleeing Afghanistan in the wake of the rise of the Taliban. But it starts at a happier time in that country’s history. A time when young women could still go to school and become teachers.

When the Moon is Low is a story of relationships more than anything.  The relationships of parents and children, husbands and wives, brothers and sisters, and those that form quickly between strangers found together in difficult situations. At the heart of the tale are Fareiba and her son, Saleem; the book is told through their voices. Fareiba came into the world and her mother departed it and that left her feeling as if she was cursed. Her life is not what it should be as her father abandons her to the care of a less than loving stepmother who uses her in a very maid like way. It is only when she finally convinces her father to let her go to school that she finds herself.

Fereiba is eventually married to a man she doesn’t know but together they create a loving family and strong bond of love. It is only as the Taliban starts to take control and many of their friends start to flee and her husband wants to remain that any friction occurs in their relationship. It turns that they should have left because one night men come for her husband and he never comes home leaving Fereiba with no money and no support in a country that now sees women as little more than chattel. She decides she must take the children and flee to her sister in London.

As they make the dangerous journey Fereiba finds she is stronger than she thought although her eldest, Saleem does not understand how they come to be in the position they are in. He just wants life to go back to what it was.

This was not an easy book to read at times. The author writes in her author notes that the travails of her characters came from stories of actual refugees. The things people will do to find a better life due to war or oppression are amazing. It certainly gave me perspective to what is going on with the Syrian refugees. The fear, the loneliness and the horrifying poverty. The book presents it all quite bluntly at times.

It’s one of those books that kept me turning the pages and that I was glad that I read but it would be hard to say I enjoyed it – the subject matter is too dark and the ending too ambiguous. It ends somewhat abruptly truth be told, I almost thought I was missing a chapter.

You can follow the When the Moon is Low Tour Schedule