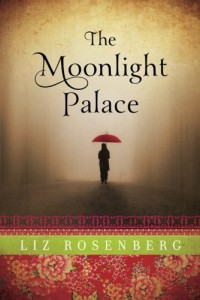 Agnes Hussein, descendant of the last sultan of Singapore and the last surviving member of her immediate family, has grown up among her eccentric relatives in the crumbling Kampong Glam palace, a once-opulent relic given to her family in exchange for handing over Singapore to the British.

Now Agnes is seventeen and her family has fallen into genteel poverty, surviving on her grandfather’s pension and the meager income they receive from a varied cast of boarders. As outside forces conspire to steal the palace out from under them, Agnes struggles to save her family and finds bravery, love, and loyalty in the most unexpected places. The Moonlight Palace is a coming-of-age tale rich with historical detail and unforgettable characters set against the backdrop of dazzling 1920s Singapore.

Liz Rosenberg is the author of 4 novels, 5 books of poems and more than 20 award winning books for children. She has edited five prize winning poetry anthologies (including THE INVISIBLE LADDER and LIGHT GATHERING POEMS) and her picture book, THE CAROUSEL was featured on PBS’ Reading Rainbow. Her newest picture book, TYRANNOSAURUS DAD (illustrated by brilliant newcomer Matthew Myers) is a Children’s Book of the Month Club bestseller and has garnered praise from Publisher’s Weekly, Kirkus, School Library Journal and elsewhere, and was an Amazon top 10 children’s book.

Her first novel for adults, HOME REPAIR was a Target Breakout book, a BookBub pick, and voted top ten for Book Clubs and Most Likely to be Next Oprah Pick on Goodreads. Her second, THE LAWS OF GRAVITY, was published by Amazon Publishing in spring of 2013 as part of a two-book deal. It has been a top ten best-seller in the United States, Canada and the UK. Featured on Booktalk, NPR and BlogTalk Radio, it is also a Jewish Book Network selection for 2013, and was named a Reader’s Choice and Editor’s Choice on Bookbrowse. Woman’s World called it “perfect for book clubs,” and The Boston Globe hailed it as “a thoughtful story about morality, personal responsibility,  the law, and above all, the complicated, sometimes incomprehensible ties of family.”

Liz Rosenberg was born and raised on Long Island. She met her husband, David, when they were 7 and 8 years old respectively, at summer camp. They became friends in high school, each married other people, and ten years after they had reconnected in high school, finally got married. They have been married 3 times to each other because they are both terrible at keeping track of paperwork. They have an actor & magician son, Eli, and a 10 year old daughter, Lily.

The synopsis of this book really intrigued me; I read a fair amount of historical fiction but I don’t read a lot that takes place in this part of the world. Any time I find a book that intrigues me and it’s removed from my usual European milieu I jump all over it. Singapore was pretty much an unknown for me and I’d hoped to learn something while being entertained.

Agnes Hussein is the last of the line from the final Sultan of Singapore. Due to an agreement with the British government the family can remain in their palace as long as there is a male descendant still alive. Agnes has an uncle still living but he is getting older and there is just no money for upkeep.

The book is a story of family, history and the ties that bind. It shows how sometimes a family’s history can do more harm to their future than they realize.

Agnes is young, just 17, and she lives in a state of blissful ignorance about the true state of the family’s finances. She knows they are poor but it’s how it’s always been and she only wants to continue to live in the palace no matter what. When circumstances arise to perhaps cause them to lose the palace the adults try to protect her but she thinks she can solve all the problems. The arrogance of youth.

There was so much potential in this book and it just didn’t live up to it for me. I think it needed to be a bit longer. The background needed some further development and the characters were also somewhat one note. I kept waiting for something to happen and yet it just rolled along at one emotional level.

You can purchase The Moonlight Palace on Amazon.com

One lucky reader (US/Can) will win a copy of The Moonlight Palace. How do you win? It’s easy – just enter the Gleam! Good luck everyone!