The delightful Doyle and Acton series continues in Murder in Containment. Anne Cleeland sent me her latest book at no charge for my honest review. Read on to learn about this latest installment in this thrilling story. 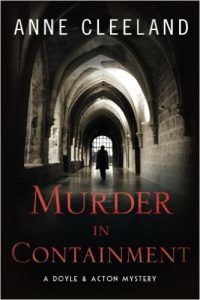 In this, the fourth installment of the Doyle & Acton mystery series, Detective Sergeant Doyle realizes that several apparently unrelated murders are actually “containment” murders–murders to contain an ominous scandal that could reach into the highest levels of Scotland Yard’s CID. In the process of tracking down the killers, however, she comes to the unsettling conclusion that Chief Inspector Acton has committed a containment murder or two of his own.

Anne Cleeland holds a degree in English from UCLA as well as a degree in law from Pepperdine University. She writes a contemporary Scotland Yard series that features detectives Acton and Doyle, and she also writes a historical series set in the Regency period. A member of International Thriller Writers, The Historical Novel Society, and Mystery Writers of America, she lives in California and has four children. www.annecleeland.com; @annecleeland.

This is my third Doyle and Acton novel and I enjoyed this one as much as I did the first two. In fact, I read it in one sitting as I could not put it down. These two are a most unusual pair in so many ways. Acton is English aristocracy, Doyle is a poor lass of Irish extraction. Acton is Doyle’s boss. Acton, even though he is a police officer operates in some grey areas while Doyle hies to the law. Oh and there is that little hint of the paranormal in that Doyle can tell is someone is lying.

I don’t read many murder mysteries any more – only a select few authors but I will jump to read a Doyle and Acton. They are well written, interesting, complex and just downright enjoyable books notwithstanding the whole murder thing.

In this installment Doyle is pregnant and she is dealing with morning sickness on top of someone trying to kill her. It makes for interesting plot lines to be sure. As Acton tries to keep her safe they both end up investigating a corruption scandal that reaches through the judicial/criminal system to the highest levels. The twists and turns will give you whiplash and you try keep up with the investigation and all of the assorted players.

I can’t tell you how riveting a read you will find this book and now I just have to patiently await the next installment and the birth of the heir the barony.