Murder in All Honour by Anne Cleeland – Book Review

I read very few murder mysteries any more; I don’t know what it is – I just don’t generally care for them. With a couple of exceptions for authors that I just love. Anne Cleeland has sent me her latest Doyle and Acton book at no charge – these two are about my favorite crime fighting duo. Read on to learn about the latest installment, Murder in All Honour. 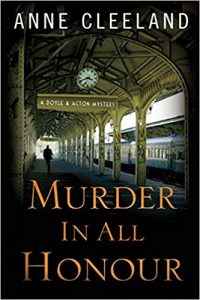 About Murder in All Honour:

Things are a bit grim at Scotland Yard, this Christmas. On the heels of a nasty corruption scandal, the CID must now contend with a killer who is murdering pregnant women, so as to steal their babies. Chief Inspector Acton doesn’t want Doyle anywhere near this case, of course, but she can’t shake the feeling that there is more to his concern than his usual over-protectiveness—and more to this case than the usual psycho-killer.

This is my fourth Doyle and Acton novel and I do adore this duo. I’m generally not a fan of murder mysteries or thrillers but make an exception for these books because of the characters and the nuances in the way the stories are written. I was very excited to have another book in the series.

This book opens with Doyle dealing with her pregnancy with causes Acton to be all the more protective. She’s handling a case where pregnant prostitutes are being murdered and their babies being cut out of them – I know, horrifying. Not exactly the easiest case for a pregnant woman. In addition there might be a couple of dead nuns in the mix. When suspicion swirls around Doyle’s church she gets very concerned. She also has a very strong feeling that Acton knows more than he’s telling.

As with the other books in the series there are several subplots that weave their way throughout the tale so you have to pay attention. This series is definitely richer for having read the books that came before – I think this is one case that I would recommend starting at the beginning rather than writing that this book can easily stand alone. There is nothing to say you couldn’t just read this one but I think you will enjoy it far more if you read the first four books. These characters are worth the effort; they are unique, far from perfect and delightful – even if Acton is a bit dark.

I read the book in one sitting. It kept me turning the pages so that I could discover the answers – more to the issues swirling around Acton than to who killed the poor women. I will note that it was not my favorite book of the series. There was a bit of repetition in Doyle’s receiving her signature “feelin’s” and a few too many scratchings of her head but other than that small complaint I was thrilled to find myself in the quirky world of Acton and Doyle.

Other books by Anne Cleeland:

Daughter of the God King