A mystery is good for making the brain think now and then. I don’t read many and when I do I lean towards less violent stories. Murder in the City of Liberty by Rachel McMillan was a perfect read for my trip back east. I thank TLC Book Tours for sending me a copy at no charge for my honest review. 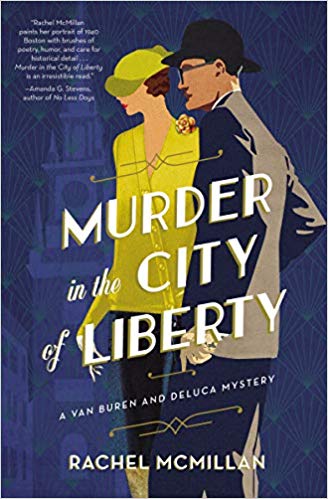 About Murder in the City of Liberty:

Hamish DeLuca and Regina “Reggie” Van Buren have a new case—and this one could demand a price they’re not willing to pay.

Determined to make a life for herself, Reggie Van Buren bid goodbye to fine china and the man her parents expected her to marry and escaped to Boston. What she never expected to discover was that an unknown talent for sleuthing would develop into a business partnership with the handsome, yet shy, Hamish DeLuca.

Their latest case arrives when Errol Parker, the leading base stealer in the Boston farm leagues, hires Hamish and Reggie to investigate what the Boston police shove off as a series of harmless pranks. Errol believes these are hate crimes linked to the outbreak of war in Europe, and he’s afraid for his life. Hamish and Reggie quickly find themselves in the midst of an escalating series of crimes.

When Hamish has his careful constructed life disrupted by a figure from his past, he is driven to a decision that may sever him from Reggie forever . . . even more than her engagement to wealthy architect Vaughan Vanderlaan.

Rachel McMillan is the author of the Herringford and Watts mysteries, the Three Quarter Time series of contemporary romances set in opulent Vienna, and the Van Buren and DeLuca mysteries praised for bringing an authentic 1930’s Boston world to life while normalizing the fictional conversation surrounding mental illness. Her first work of non-fiction, described as a romantic’s guide to independent travel, releases in 2020. Rachel lives in Toronto, Canada.

I did not read the first book in the series and while most issues where explained in the flow of this story, I somehow felt the lack. The story takes place in 1940’s Boston and finds the protagonists working together as investigators. Hamish and Reggie are friends but both have feelings for the other that they can’t seem to share. Reggie is far more outgoing and heads into every situation full speed ahead. Hamish has what we would call an anxiety disorder today so he tends to hold back.

In the last book Hamish was shot while the two of them were chasing a murder case surrounding his cousin Luca. They both are concerned with the huge disparity between the wealthy and the poor in Boston and find that it is not getting any better, even with the whispers of another War approaching. Incidents of prejudice against Jewish people is climbing and that impacts their friend Nate.

As they work their new cases – there are two – they find that Luca and his illegal enterprises might not be as removed as they thought they were. There is danger in many corners of the city and it will take both of them, working together to make their way through the minefield.

I have to admit that this was a slow read for me. I just didn’t find my imagination captured by the characters or the plot. I pushed myself through it but I’m not likely to want to read another.  Reggie’s character was particularly unpleasant to me. For a woman who is putting herself out there a “modern” woman she doesn’t really know her own mind. The underlying mystery was also a titch confusing to me. Perhaps I am just not one for 40ies murder mysteries.

Read about the first book in the Hamish and Reggie series, Murder at the Flamingo