Murder in Thrall is the first in a new murder mystery series from author Anne Cleeland. I’ve enjoyed her historical novels so I was intrigued when she sent me her new book at no charge to review. All opinions are my own. 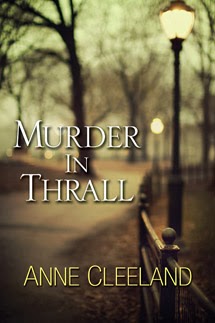 About Murder in Thrall:

Can London’s most elusive killer elude the keen minds of Scotland Yard’s most unlikely pair of detectives?

An Irish redhead of humble beginnings and modest means, Kathleen Doyle is the antithesis of Chief Inspector Michael Sinclair, Lord Acton, the brilliant but enigmatic lord with a knack for solving London’s most high profile homicides. When a horse trainer is found dead at a racetrack, the duo’s investigation does little to deter the killer at large. Jeopardizing the case are their colleagues at CID headquarters, whose nosing into the nature of Doyle and Acton’s after hours relationship threatens to lay bare the most classified information of all. As the murders pile up, Doyle and Acton uncover something far more sinister than they could have imagined. Now that they know too much, their partnership could be very brief indeed. . .

Anne Cleeland holds a degree in English from UCLA as well as a degree in law from Pepperdine University, and is a member of the California State Bar.She writes a historical fiction series set in the Regency period as well as a contemporary mystery series set in New Scotland Yard. A member of the Historical Novel Society and Mystery Writers of America, she lives in California and has four children.

I generally have sworn off murder mysteries. But I have enjoyed Ms. Cleeland’s books in the past and thought I’d shake myself out of the past for a bit. I’m so very glad I did! I opened this book yesterday morning and finished it last night. I didn’t want to put it down. Nothing was rote – not the plot, not the characters, not the murders and most assuredly not the relationship between the two main characters.It’s the start of a series and I’m crying in my beer (metaphorically) that the next one doesn’t come out until July 2014! Acton and Doyle are a truly unique pair of investigators; he is brilliant and she intuitive and together they make a team that their colleagues don’t understand.

All is not perfect though – he does have some seriously creepy tendencies but she is so very engaging. She senses that he has secrets but knows that she can trust him.In this novel the slow building of character is done so well that you really get to know all of the players – both good and bad. Yet snippets leaving wondering paving the way for future installments. The book opens with a murder and Acton, a very established, high ranking Chief Inspector asking Doyle a very new Constable to help on a case. This leads to confusion from her colleagues, her supervisor and she also has no clue why he has chosen her. In the week that follows so much happens it’s hard to keep up and maintain credibility but somehow it all works.

I’ll be looking forward to successive installments to see if Acton’s stalkerish personality fades now that he and Doyle are a strong team. I do hope so – it’s hard to root for a character that spies on his partner so thoroughly. I am hopeful that these two will be putting criminals behind bars for a long time.