I bring you the second book in the exciting Doyle and Acton series. Anne Cleeland sent me a free ecopy of Murder in Retribution for me to review. As always, my thoughts are all my own. 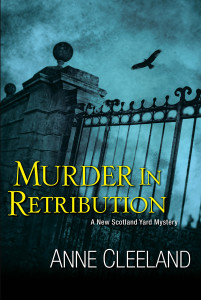 About Murder in Retribution:

Doyle is assisting Acton in investigating a turf war between the Russian mafia and a Sinn Fein splinter group, with the warring sides in a fight to the death over who will control a money-laundering operation at the local race course.  The London CID is racking up a body count and Doyle can dredge up little sympathy for the victims—that is, until she notices there is very little forensic evidence at any of the scenes.

In the second book of the Murder series, Doyle and Acton find themselves trying to outwit enemies foreign and domestic as they work to untangle the reason that the underworld war has spun out of control.

Anne Cleeland holds a degree in English from UCLA as well as a degree in law from Pepperdine University, and is a member of the California State Bar.

She writes a historical fiction series set in the Regency period as well as a contemporary mystery series set in New Scotland Yard. A member of the Historical Novel Society and Mystery Writers of America, she lives in California and has four children.

This is my second Acton and Doyle novel. I am very intrigued by this couple, their relationship is a little bit twisted but it adds to what makes these books so interesting. In this adventure the two are investigating a series of murders that may or may not be connected. Both Acton and Doyle are holding on to secrets that are of import to the case.

As the two settle into their sudden marriage, Doyle finds herself pregnant. She isn’t sure how she feels about it and is certain that everyone feels that Acton married her simply for this reason. She knows better but she is already concerned due to the difference in their social status and the quick pregnancy will only add to gossip.

Acton tries to establish some couple normalcy by having date nights with friends but Doyle would rather just be “at home” especially as she is not feeling well in the early weeks of her pregnancy. Her symptoms seem to be rather severe but she keeps the worst of it from Acton for fear he will keep her from work.

Work beckons and there too there is intrigue and a minefield of emotions to be navigated. I love the character of Doyle because she has a biting wit and a strong sense of herself in spite of feeling a bit insecure due to her beginnings in life. She loves her husband in spite of his erm, issues and is willing to protect him with all that she has. Acton is willing to do what he can to change for her. It will be interesting to see how these two evolve.  It’s very hard to really go into the book without spoiling too much of the story as Ms. Cleeland weaves it all together so expertly. These are not characters everyone will like as they are not the typical hero types but if you are looking for a change from the standard with compelling protagonists and interesting plots I would highly recommend this series.

You can read an excerpt of Murder in Retribution