I am very pleased to welcome Arnold Rudnick today in support of his book, Near Death. It’s a mystery/thriller and sadly, I’ve had to give them up for I have found that I simply can’t sleep when I read them. I do believe that given the synopsis and the reviews that I would have enjoyed this one but I need my sleep. 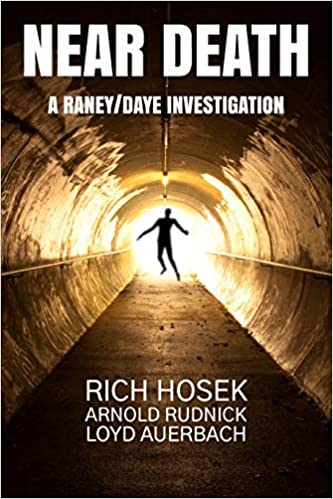 NEAR DEATH introduces parapsychologist Dr. Jennifer Daye and police detective Nate Raney in a ghostly mystery.When Nate is shot during a high-stakes robbery, he awakens from the ordeal during which he was clinically dead with the information he needs to track down the men who shot him. However, he remains skeptical that there is anything paranormal about the revelations.Jennifer believes otherwise and tries to convince Nate to share the story of his near-death experience. Nate is reluctant, but she does convince him to team up with her for the investigation of an uninvited ghost in a woman’s apartment.NEAR DEATH brings this investigative odd couple together in a fast-paced story that takes you on an exciting journey through the paranormal that draws Jennifer and Nate into a decades-old cold case.

Award winning children’s book author Arnold Rudnick is known for the beloved ESPete and Little Green series. His first book, ESPete: Sixth Grade Sense won a silver medal in the Moonbeam Children’s Book Awards (2009) and Reader’s Favorite Awards (2010) and was a pick in Danny Brassell’s Lazy Readers Book Club (September 2012). The second book in this series, ESPete in ESPresident, is a graphic novel with illustrations by Marcelo Gorenman. Little Green is Arnold’s first picture book, and has been translated into Spanish – Pequeño Verde.

Arnold studied film and accounting at the University of Illinois, Urbana-Champaign, then moved to Los Angeles, where he worked in feature development at Paramount Pictures and Gary Lucchesi Productions. Arnold has written for many television shows, including The Fresh Prince of Bel-Air, Star Trek: Voyager and The New Addams Family. In addition to writing, Arnold works in school administration. He and his wife and children live in Los Angeles, California.

“… a riveting paranormal novel with a provocative plot and a spellbinding storyline, it is a captivating page-turner with outstanding characters and intriguing scenes. A fascinating storyline filled with intrigue, murder, and a ghostly apparition makes this novel a spectacular read for those who love exciting, suspenseful crime stories with a supernatural flair.” –Susan Sewell, Readers’ Favorite ⭐⭐⭐⭐⭐

“… Near Death will thrill anyone who enjoys paranormal detective fiction and convert just about anyone else who gives this well-written and enthralling story a try.” –Jack Magnus, Readers’ Favorite ⭐⭐⭐⭐⭐

“… a highly immersive and really accomplished work of paranormal detective fiction, one which I could easily see becoming a hit TV series for its many dynamic twists and clever ideas… There’s plot aplenty for this first novel, with well-woven strands that connect in unexpected yet satisfying ways… I would highly recommend Near Death for fans of genre-bending and uniquely plotted mystery novels…” –K.C. Finn, Readers’ Favorite ⭐⭐⭐⭐⭐

“A brilliant mix of crime and paranormal! It is mind-boggling, charming, and certainly haunting… the collaboration between Rich Hosek, Arnold Rudnick, and Loyd Auerbach has produced a paranormal masterpiece.” –Foluso Falaye, Readers’ Favorite ⭐⭐⭐⭐⭐

“Engaging from the start, Near Death puts a good spin on the classic paranormal mystery…” –Lit Amri, Readers’ Favorite ⭐⭐⭐⭐⭐