I was sent a copy of Of Kings and Griffins from the author, Judith Starkton. All opinions are my own. 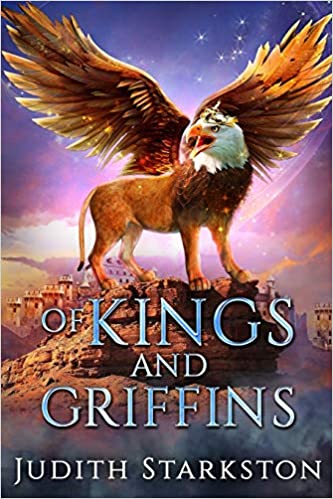 About Of Kings and Griffins:

A vicious king, vengeful griffins, and a scheming goddess. Can Tesha outmaneuver foes from these three different worlds?

For Tesha, priestess and queen, happiness is a world she can control, made up of her family and the fractious kingdom she and her husband rule within the Great King’s empire. But now the Great King is dead, and his untried son plots against them. Tesha fights back with forbidden sorcery and savvy. In yet another blow, the griffin king lures Daniti, Tesha’s magical blind sister, into a deadly crisis that Daniti alone can avert.

As danger ensnares everyone Tesha loves, her goddess offers a way out. But can Tesha trust this offer of divine assistance or is it a trap—one that would lead to an unstoppable bloodbath?

Escape into this award-winning epic fantasy series, inspired by the historical Hittite empire and its most extraordinary queen.

Judith Starkston has spent too much time reading about and exploring the remains of the ancient worlds of the Greeks and Hittites. Early on she went so far as to get two degrees in Classics from the University of California, Santa Cruz and Cornell. She loves myths and telling stories. This has gradually gotten more and more out of hand. Her solution: to write fantasy set in the exotic worlds of the past. Fantasy and Magic in a Bronze Age World. Hand of Fire was a semi-finalist for the M.M. Bennett’s Award for Historical Fiction. Priestess of Ishana won the San Diego State University Conference Choice Award.

Judith has two grown children and lives in Arizona with her husband. Because writing is best done with community, Judith belongs to her local Desert Sleuths chapter of Sisters in Crime, the Society of Southwestern Authors and the Arizona chapter of the Historical Novel Society. Judith is represented by Richard Curtis.

For a free short story set in her Bronze Age fantasy world and a free cookbook of recipes inspired by the ancient Mediterranean foods in her novels, subscribe to Judith’s newsletter on her website. The newsletter goes out occasionally with updates about new releases, special offers and useful information about recommended books and the background of her Bronze Age world.

Of Kings and Griffins is the third book in the author’s Tesha series. I did not read the first two and felt no loss. What you are getting when you dive into the book is a rich, story based on the history of the Hittites. Tesha is married to the chief advisor to the throne but the King has just died and she is anxious for many reasons – most of all she wants her husband to keep his influence with the new king. But the new king is only a child and there are forces afoot that aim to take advantage.

As this book takes the reader into the realm of fantasy we also meet an enclave of mythical griffins where Tesha’s sister Daniti has been kept captive. While there though she learns to appreciate the magnificent creatures and there is an understanding that they too only want the best for their children.

In addition, Daniti’s husband, Marak is dealing with a plague of some kind that is killing his soldiers. He cannot understand the how or the why but he needs to stop it before his army is decimated.

All of these subplots are expertly woven together into a fast paced and thrilling tale that combines history and fantasy. The characters are richly developed and all wonderfully distinct and comfortably inhabit their worlds be they mystical or just plain boring.  That is the kind of writing you have to appreciate; where you can easily move between griffins and humans and feel that all is right in the world you are reading about.

This was a delight of a book. Well written and quite engrossing. I didn’t get much done while reading it and that’s the kind of book you want, right?

All purchase links are affiliate links. What that means is that if you make a purchase through one I may receive a small commission (at no additional charge to you)