Oliver and Jack in Lodgings at Lyme by Christina E. Pilz – Blog Tour and Book Review 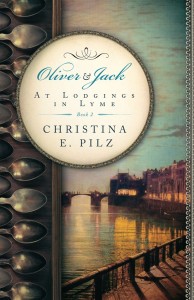 An ex-apprentice and his street thief companion flee the dangers of Victorian London and the threat of the hangman’s noose in search of family and the promise of a better life.

After Oliver Twist commits murder to protect Jack Dawkins (The Artful Dodger), both must flee London’s familiar but dangerous environs for safety elsewhere. Together they travel to Lyme Regis in the hopes of finding Oliver’s family. Along the way, Jack becomes gravely ill and Oliver is forced to perform manual labor to pay for the doctor’s bills.

While Oliver struggles to balance his need for respectability with his growing love for Jack, Jack becomes disenchanted with the staid nature of village life and his inability to practice his trade. But in spite of their personal struggles, and in the face of dire circumstances, they discover the depth of their love for each other.

Christina was born in Waco, Texas in 1962. After living on a variety of air force bases, in 1972 her Dad retired and the family moved to Boulder, Colorado. There amidst the clear, dry air of the high plains, as the moss started to grow beneath her feet, her love for historical fiction began with a classroom reading of Little House on the Prairie by Laura Ingalls Wilder.

She attended a variety of community colleges (Tacoma Community College) and state universities (UNC-Greeley, CU-Boulder, CU-Denver), and finally found her career in technical writing, which, between layoffs, she has been doing for 18 years. During that time, her love for historical fiction and old-fashioned objects, ideas, and eras has never waned.

In addition to writing, her interests include road trips around the U.S. and frequent flights to England, where she eats fish and chips, drinks hard cider, and listens to the voices in the pub around her. She also loves coffee shops, mountain sunsets, prairie storms, and the smell of lavender. She is a staunch supporter of the Oxford comma.

This is the second book of of at least three that I am aware following this re-look at the life of Oliver Twist. The first novel, Fagin’s Boy brought Oliver into an upper class life where he became quite used to the comforts of life. He felt his place in the very class conscious Victorian world and was quite aware of where he fit and belonged. He loved to read and had dreams of opening a book shop. It all fell apart when he past returned in the form of Jack Dawkins and his Uncle dying unexpectedly.

This next tale picks up with Oliver and Jack on the run – they ultimately decide to go to a town called Lyme Regis since that is where Oliver’s mother is from.  They need to get out of London and this is as good as any place to go. Problems arise when Jack falls ill from the effects of a concussion – Oliver is exceptionally worried about him. They do manage to find shelter in a a great house but the doctor still needs to be paid which sets Oliver off to work at a very rough job. But he will do anything for Jack.

This is a book basically about these two young men and their growing feelings for one another. It’s also about the class divide between them; Oliver has been reared with manners and an understanding of how society works. Jack is a child of the streets and has no manners nor does he care. He will try for Oliver’s sake but he doesn’t understand why one person is better than another simply because of their birth.

I must admit that I didn’t like this book as much as I enjoyed Fagin’s Boy. Perhaps if it had been a little shorter? It just seemed a little slow and in some places repetitive. It ended with a definite cliffhanger to set up for the next book. Ms. Pilz does an excellent job of setting the mood for her book – this period in time was not welcoming to boys (or anyone for that matter) with no money or family to support them. The mood is set so well I could almost feel the cold rain that always seemed to be falling.

You can read my review of Fagin’s Boy