The Orphan of Florence by Jeanne Kalogridis – Book Review with Giveaway

I do enjoy reading about the Renaissance. I generally tend towards art themed books but byzantine intrigue also catches my attention now and then (yes I realize that I’ve mixed my time periods there but you get what I mean.) The Orphan of Florence by  Jeanne Kalogridis was sent to me by the publisher at no charge for my honest review. 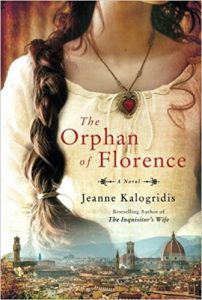 About The Orphan of Florence:

In this irresistible historical novel set in the turbulent world of the Medicis, a young woman finds herself driven from pick-pocketing to espionage when she meets a mysterious man.

Giulia has been an orphan all her life. Raised in Florence’s famous Ospedale degli Innocenti, her probing questions and insubordinate behavior made her an unwelcome presence, and at the age of fifteen, she was given an awful choice: become a nun, or be married off to a man she didn’t love. She chose neither, and after refusing an elderly suitor, Giulia escaped onto the streets of Florence.

Now, after spending two years as a successful pickpocket, an old man catches her about to make off with his purse, and rather than having her carted off to prison he offers her a business proposition. The man claims to be a cabalist, a student of Jewish mysticism and ritual magic, who works for the most powerful families in Florence. But his identity is secret―he is known only as “the Magician of Florence”―and he is in need of an assistant. She accepts the job and begins smuggling his talismans throughout the city.

But the talismans are not what they seem, and neither is the Magician. When Giulia’s involvement with him ends with his murder, she’s drawn into a treacherous web of espionage and deceit involving the forces of Rome, Naples, and a man known as Lorenzo the Magnificent. Accused of the Magician’s murder, Giulia is pursued by the handsome policeman Niccolo, Lorenzo’s henchmen, and foreign spies, and in order to survive, she must not only solve the mystery of the mystery of the Magician’s murder, but that of her own past

JEANNE KALOGRIDIS lives in California, where she shares a house with an adorably wiggly black lab named Django. She is the author of the critically acclaimed The Borgia Bride, and numerous other dark fantasy and historical novels.

Guilia is a young woman who was left at an orphanage with only a necklace to give an clue to her identity.  As she grows up she presents a very bright mind and a less than compliant nature to the nuns who care for her. When she reaches the age where she is expected to leave the orphanage she less than politely rejects the man the mother superior brings in as a prospective husband and leaves, taking another orphan with her. The two of them join up with another woman and her infant to form a family of sorts.

The Florence of this time is not kind to the poor and certainly not to a woman alone. Guilia therefore adopts the persona of a man. She picks up some pickpocket skills and this is how she supports the family. But one night things don’t go as planned and she is caught. The man who has captured her is the mysterious and powerful Magician of Florence. He wants to bring her into his fold and work with her but Gulia is not one who trusts easily. Still, they form an uneasy alliance, working for the benefit of Florence.

At this point if I go too deep into plot I will start to give too much away. This was certainly a twist on the usual read for this time period. It kept me turning the pages for sure. Gulia is a little spitfire of a character and a bit volatile. As much as I liked her she still seemed a bit undeveloped. Her emotions seems always on the surface as opposed to coming from a real place if I am making sense. She is very reactionary. The Magician was a more nuanced character with more depth.

The plot was well constructed and full of twists and turns and a couple of them caught me quite by surprise. The book also offered a bit of education about the political situation of the time. It was a delicate time as Lorenzo Medici was trying to maintain his hold on power and the Pope was attempting to consolidate his power.

All in all a solid read with interesting characters.

One lucky US reader will win a copy of The Orphan of Florence. Just enter as many ways as you would like on the Gleam widget below. Full rules are on the widget. Good luck everyone.
orphan

The Confessions of Catherine de Medici by C.W. Gortner

The Scribe of Siena by Melodie Winawer