I received a free copy of Orphan Train from TLC Book Tours for my honest review. 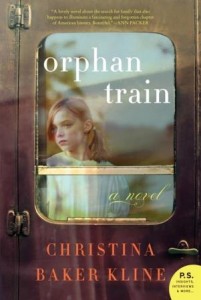 Between 1854 and 1929, so-called orphan trains ran regularly from the cities of the East Coast to the farmlands of the Midwest, carrying thousands of abandoned children whose fates would be determined by pure luck. Would they be adopted by a kind and loving family, or would they face a childhood and adolescence of hard labor and servitude?
As a young Irish immigrant, Vivian Daly was one such child, sent by rail from New York City to an uncertain future a world away. Returning east later in life, Vivian leads a quiet, peaceful existence on the coast of Maine, the memories of her upbringing rendered a hazy blur. But in her attic, hidden in trunks, are vestiges of a turbulent past.
Seventeen-year-old Molly Ayer knows that a community-service position helping an elderly widow clean out her attic is the only thing keeping her out of juvenile hall. But as Molly helps Vivian sort through her keepsakes and possessions, she discovers that she and Vivian aren’t as different as they appear. A Penobscot Indian who has spent her youth in and out of foster homes, Molly is also an outsider being raised by strangers, and she, too, has unanswered questions about the past.
Moving between contemporary Maine and Depression-era Minnesota, Orphan Train is a powerful tale of upheaval and resilience, second chances, and unexpected friendship.

Christina Baker Kline is a novelist, nonfiction writer, and editor. In addition to Orphan Train, her novels include Bird in Hand, The Way Life Should Be, Desire Lines, and Sweet Water.

Kline also commissioned and edited two widely praised collections of original essays on the first year of parenthood and raising young children, Child of Mine and Room to Grow. She coauthored a book on feminist mothers and daughters, The Conversation Begins, with her mother, Christina L. Baker, and she coedited About Face: Women Write About What They See When They Look in the Mirror with Anne Burt.

Kline grew up in Maine, England, and Tennessee, and has spent a lot of time in Minnesota and North Dakota, where here husband grew up. She is a graduate of Yale, Cambridge, and the University of Virginia, where she was a Hoyns Fellow in Fiction Writing. She has taught creative writing and literature at Fordham and Yale, among other places, and is a recent recipient of a Geraldine R. Dodge Foundation fellowship. She lives in Montclair, New Jersey, with her family.
Find out more about Kline at her website, connect with her on Facebook, and follow her on Twitter.

I continue to be amazed at the things I learn about the history of this country from reading books. Orphan Train is based in fact; from the mid 19th century through the first quarter of the 20th century there was no system for dealing with orphans or what we would consider foster children today. It was left to churches and charitable organizations. And for those who feel that they are best left to deal with these social issues, I suggest you research the orphan trains because their solution was to take the children into various cities and give them away to anyone who wanted a child. No background checks, no follow up, no nothing. These children were left with people in the hopes that they would be given a good life. Some were, many were nothing more than house slaves. I’ll get off the soapbox now.

The book juxtaposes two lives – that of young Molly, a foster child of the current generation who lives with a family that is divided as to her presence. The “father” is pleasant to her and sees the good in Molly but the “mother” would rather she be gone and in all truth is only doing the foster thing for the money it brings into the household. The second life is that of Vivian – born Niamh, who becomes Dorothy and ultimately Vivian as she is left alone in New York after her family is killed in a fire. She is taken in by Children’s Aid and sent West on an Orphan Train to hopefully find a new home. What she finds at first is mistreatment, suspicion and abuse.

While on the train she meets some other orphans one of whom will play an important role in her life. Most of the other characters, though fade into the background as the story focuses on Vivian and Molly and how the two of them reconcile their pasts which are not as different as they might think.

I sped through the first 2/3rds of this book totally enthralled with Vivian’s story. Molly’s life was really not as interesting or as fleshed out as Vivian’s and I suppose that since the book IS titled Orphan Train it should be focused on Vivian. Once the book hit the point in the story that moved it to the present it was as if all the rich detail that made the first part so compelling went out the window. There was an OMG moment in the book and then everything was rushed and it became, at least to me, a book of what could have been.

It was as if the author had only so many pages left and had to fit in more information than allotted space. I felt cheated somehow and very disappointed. The book could have been so much more and I feel the loss of what I know I’ve missed.

Other books by Christina Baker Kline:

You can read my review of A Piece of the World

You can purchase A Piece of the World

All purchase links are affiliate links which means if you make a purchase through them I make a small commission which helps to keep the Farm cats in toys and treats.