The Plague Diaries by Ronlyn Domingue – Book Review with Giveaway

I was very excited when Ronlyn Domingue contacted me with the news that the final book of her Keeper of the Tales trilogy was being published. I thoroughly enjoyed the first two books and I am very happy to share The Plague Diaries with you today. Ms. Domingue sent me the book at no charge for my honest review. 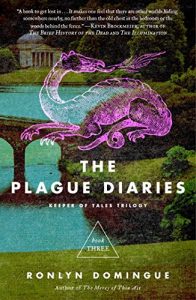 About The Plague Diaries:

The astounding, epic conclusion to the Keeper of Tales Trilogy brings together the cryptic prophecy in The Mapmaker’s War and the troubling mysteries in The Chronicle of Secret Riven—leading to an unforgettable reckoning between lies and truth.

We are all born made of gold.

Secret Riven—the mystically gifted heroine who now represses her uncanny telepathic power—works for the mysterious magnate Fewmany as an archivist in his private library. There, she stumbles upon the arcane manuscript that had vanished following her mother’s untimely death. She suspects the manuscript contains a profound secret, and she is yet unaware of its link to a thousand-year-old war and her own family’s legacy.

The tasks before her are clear: Secret must finally learn what Fewmany wants from her as well as the meaning of a strange symbol she’s dreamed of since childhood. At last, she must confront the questions haunting her and depart on a quest to find the truth about herself, her dead mother, and her fate—to unleash a Plague of Silences meant to destroy, and transform, the world as all have known it.

A dazzling, genre-bending masterwork, The Plague Diaries illuminates the power of our choices, the scars they leave, and the wounds they heal.

Ronlyn Domingue is the internationally published author of The Mercy of Thin Air and the Keeper of Tales Trilogy—The Mapmaker’s War, The Chronicle of Secret Riven, and The Plague Diaries. Her essays and short stories have appeared in several print and online publications, including New England Review, Shambhala Sun, and The Nervous Breakdown. Connect with her on RonlynDomingue.com, Facebook, and Twitter.

This is the final book in the Keeper of the Tales trilogy. I have read these three books as they have come out starting in 2013 and if you have not read them yet you are so very lucky to be able to read them back to back to back. If, like me you have been awaiting this book – well, your long wait is over. I so want to start from the beginning now and read them ALL over again. Can you tell I love these books? And I am not usually a fan of this genre of book.

In The Plague Diaries Secret Riven learns of her destiny. She has free will and can choose not to follow the path laid before her. She has known all her life that she is different but her mother treated her poorly and her father saw her as a means to an end. As she gets older she longs to go to the Higher Academy but girls don’t usually attend. She does not get accepted on her first try so she accepts a job with the wealthy magnate in town, Fewmany. He is a man who knows what he wants and what he wants is everything. He welcomes Secret and slowly seduces her to a life of having everything you could want before he reveals himself.

This is a hard book for me to describe and to write about as it is a book that takes place on many levels. I’ve long written of my difficulties with books that present like this. The brilliance of Ms. Domingue is her ability to create her worlds with such brilliantly written sentences that even someone as literal as me can get lost in a a realm of fantasy and magic and believe.

That is not to say I grasped all that was going on. I know I did not. I do know that in this last book I understood more than in the first two. Perhaps because of the world we currently live in – much of what is written seems to relate to the turmoil of today.

I will note that I found my emotions all over the place in reading The Plague Diaries, even to the point of crying at points. It is a powerful book with characters that will stay with you. It will make you think. About yourself, about your life and about the people around you. It can be read on its own but it is a far richer experience to read the whole trilogy. All three books are outstanding. If you don’t read fantasy take a chance with these books – you will not be disappointed. If you do, you will be doubly rewarded.

One lucky US reader will win a copy of The Plague Diaries. Just enter as many ways as you would like on the Gleam Widget below. Full rules are on the widget. Good luck everyone.

Other Books by Ronlyn Domingue:

The Chronicle of Secret Riven

All purchase links are affiliate links. If you make a purchase I receive a small commission that helps to keep the Farm cats in treats.