Today’s post on planting garlic to overwinter with worm castings is brought to you by Circle M Farms. The company sent samples for the hubby to use. Since the samples were sent at the end of our growing season he decided that using them for garlic planting was better than having them sit until Spring. 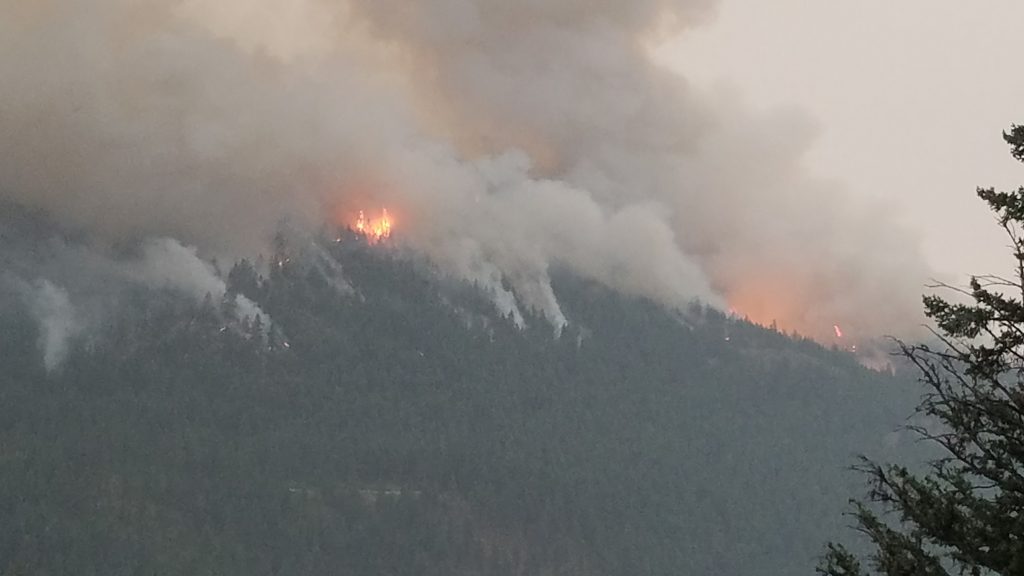 Growing your own food is very satisfying, it a lot of hard work. This summer was a bit of a challenge for the hubby since he couldn’t keep his usual gardening schedule due to the wildfire. The air was so full of smoke that even with a mask on he couldn’t spend much time outside. He also had to use a lot of the time he did spend out in doing preventative maintenance around the property in case we had to evacuate.

With Planting Garlic Timing is Everything

The fire put everything behind from the harvest to getting things ready for winter. We plant garlic every year and it is usually in by now but better late than never, right? I am going to show you how the hubby plants the garlic to overwinter. This year he gave it a bit of a boost with the addition of a super rich type of compost – worm castings.  I am sure you want to know all about worm castings, well don’t worry. I’m going to tell you all about them 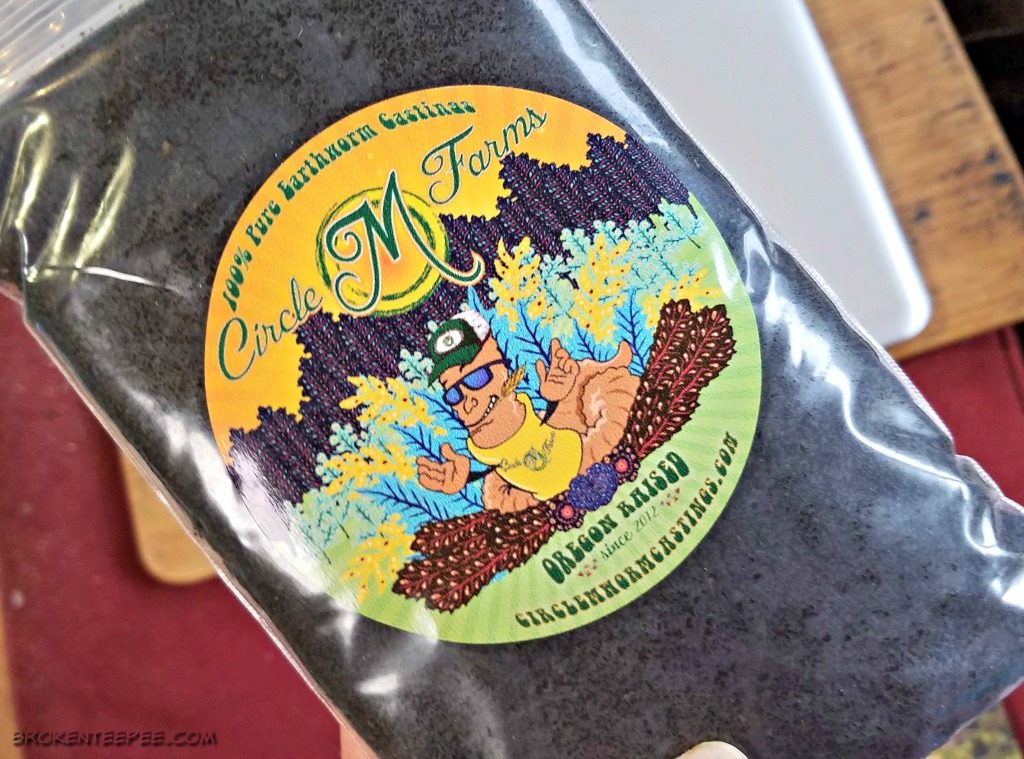 What are Worm Castings!?

Yup, worm poop. But we all know that poop makes great fertilizer and for some reason worm poop is exceptionally good fertilizer. We did have worms in the basement for a while but I don’t know what exactly happened to them. Their erm, remains went into the compost. For people who don’t want to keep worms purchasing worm castings from a place like Circle M Farms is the best way to take advantage of the advantages their poop can bring to a garden.

The Worm castings look and feel like a thick, rich soil. They have no odor other than one you would expect from soil.

How to Plant Garlic to Overwinter

To grow garlic you need garlic. It’s that simple. You break apart the heads into cloves and plant the cloves. This year the hubby told me he planted about 60 cloves from what he grew last year and then about 10 more of different varieties that he traded with a friend so we could try something new. 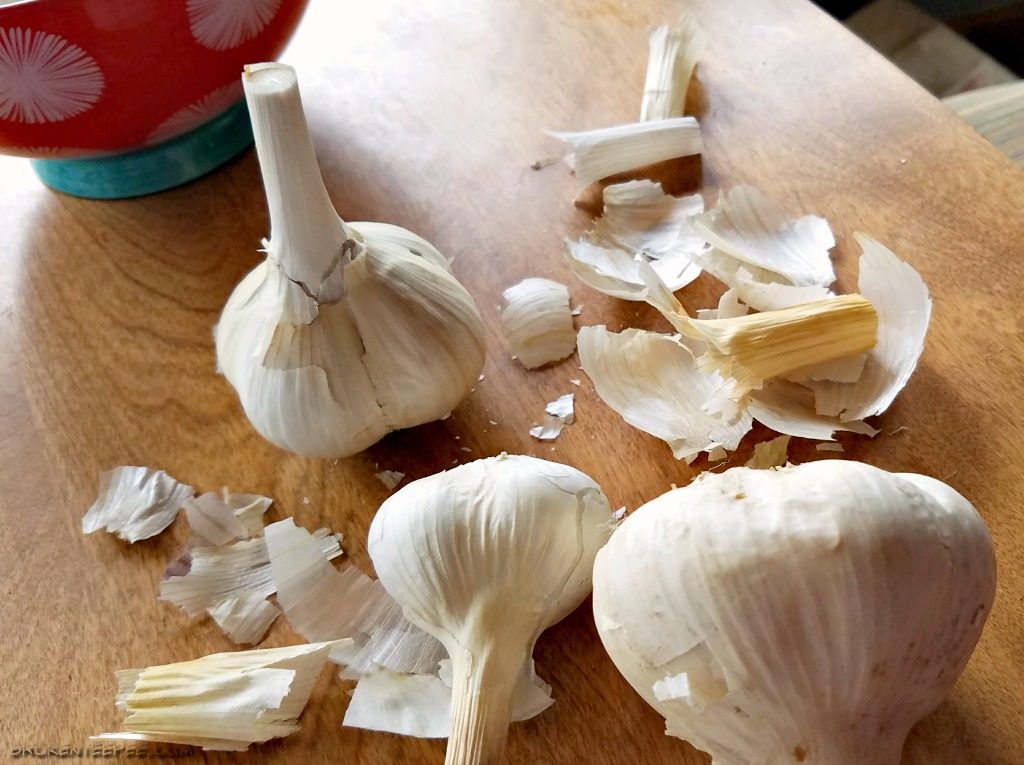 The most difficult part of the whole process is breaking apart the heads! Once he does that he gathers them in a bowl. Then he just just goes out and prepares the garden where he is going to plant. He stakes the rows, ties string and then makes a shallow furrow where he will be placing the garlic cloves. 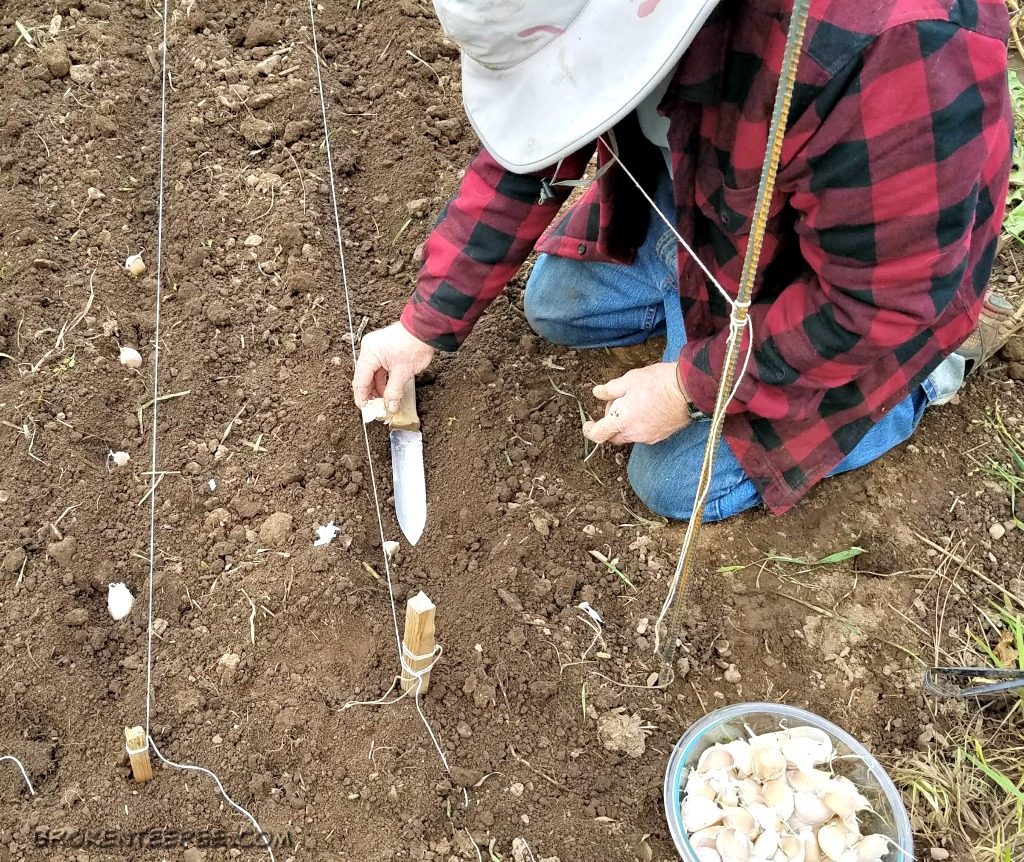 He places the cloves about 8″ apart. By using the blade of his knife as a guide he knows the placements will be even along all three rows that he plants. 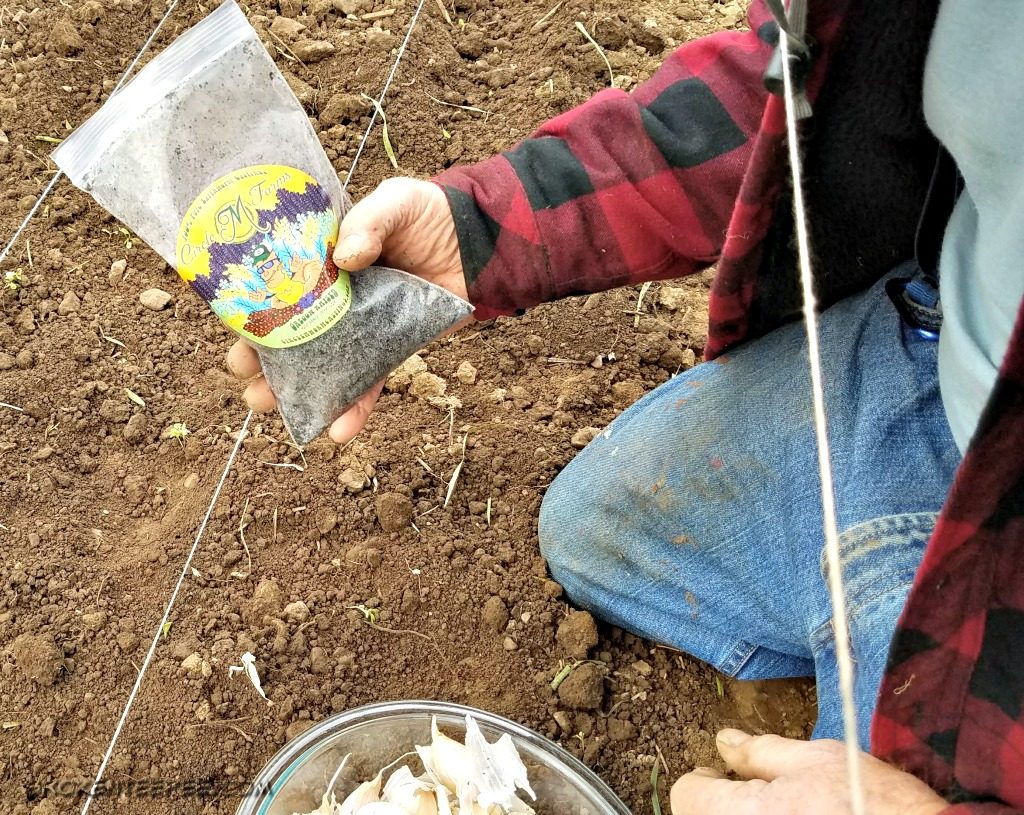 After he gets the cloves in the ground – they go in point down – he then sprinkles on some of of the worm castings. 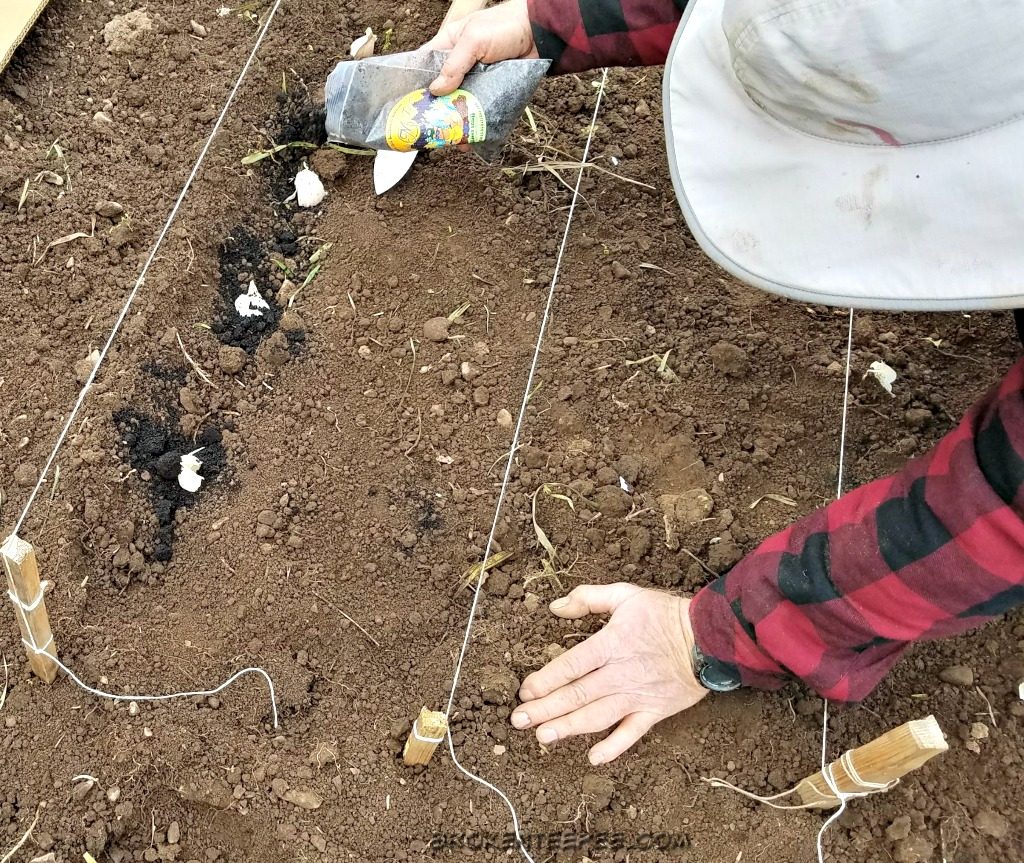 Just a little, around each clove. Then he covers them over and lightly pats the soil on top. 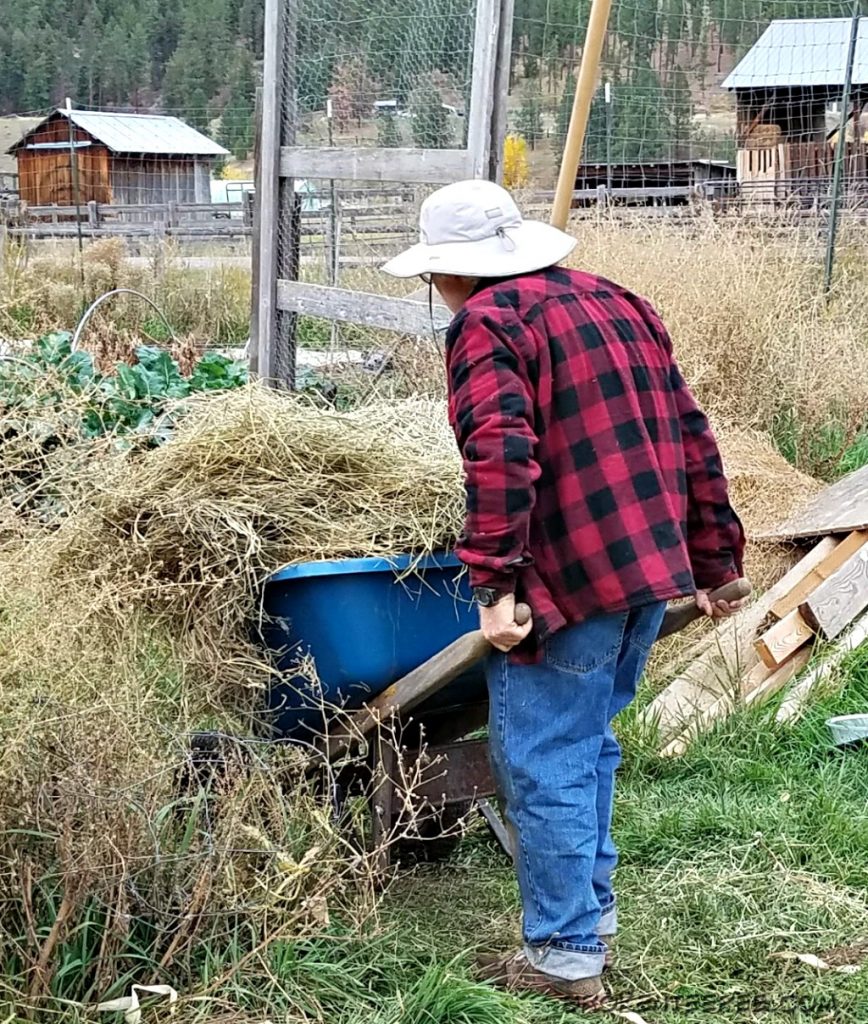 Bring in the Mulch

Once he got all 70 or so cloves in the ground it was time to go get the mulch. Even though we don’t still have the goats we do still have lots of goat poop filled hay in the barn. It won’t last forever but we still have a couple of years I think. 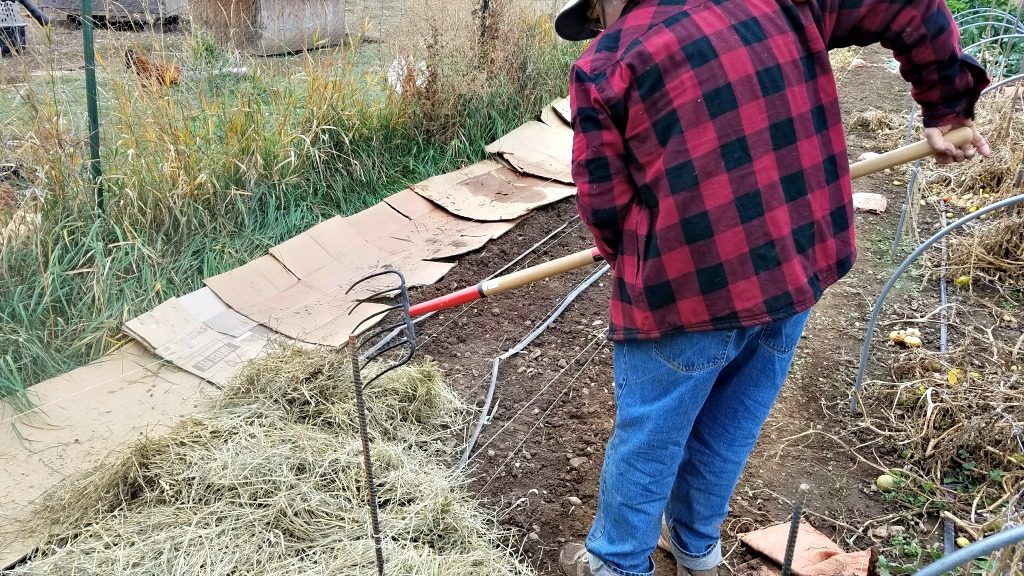 Since the garlics will spend their winter sleeping they need a nice thick blanket. Once they were all covered the hubby checked with his supervisor…. 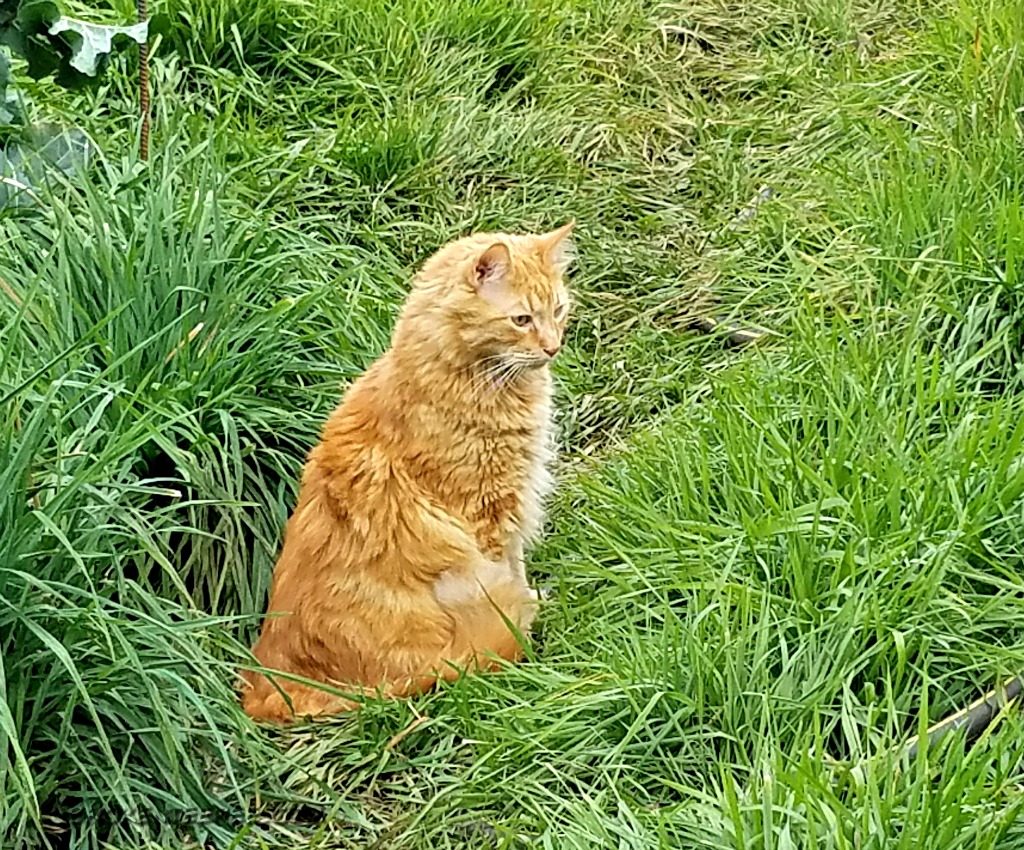 ….and he got the OK. Sherpa meowed that he did a great job. Then he went back to gopher hunting.

Are Worm Castings for You?

You don’t have to have a big outside garden to take advantage of this composting power. Worm castings will benefit your houseplants too. Here is what the company has to say:

Worm Castings are a great way to keep your house plants healthy and thriving without chemicals.  While traditional fertilizers have ingredients like nitrogen, which are important for plant life, they do not have the right balance of nutrients and bacteria that help your plants thrive.  Out in nature, soil maintains this balance through fungi, microbs, worms and other insects that put minerals in the soil.  Since house plants are in a pot the soil becomes depleted these nutrients.

Are your houseplants wilting despite your best efforts? Worm castings are the organic, easy solution when your indoor garden is looking lackluster. Traditional fertilizers contain the ingredients you associate with plant health, like nitrogen, but they don’t have some of the essentials your plants need to thrive. Plants require a balanced range of nutrients and bacteria to maintain vigor. In nature, these are delivered through the action of fungi, microbes, worms, and other insects that generate soil minerals into plant food. When your plant is in a pot, eventually the soil becomes depleted of these essentials. Re-potting your plant with a 25%-50% worm casting soil mix will give your plant the boost it needs to thrive for months.

Watch it all in action: