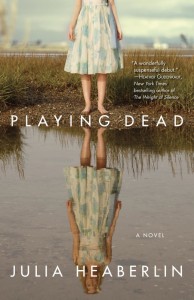 Paperback: 352 pages
Publisher: Ballantine Books; Original edition (May 29, 2012)
“Dear Tommie: Have you ever wondered about who you are?”
.
The letter that turns Tommie McCloud’s world upside down arrives from a stranger only days after her father’s death.  The woman who wrote it claims that Tommie is her daughter–and that she was kidnapped as a baby thirty-one years ago.
.
Tommie wants to believe it’s all a hoax, but suddenly a girl who grew up on a Texas ranch finds herself linked to a horrific past: the slaughter of a family in Chicago, the murder of an Oklahoma beauty queen, and the kidnapping of a little girl named Adriana.  Tommie races along a twisting, nightmarish path while an unseen stalker is determined to keep old secrets locked inside the dementia-battered brain of the woman who Tommie always thought was her real mother.  With everything she has ever believed in question, and no one she can trust, Tommie must discover the truth about the girl who vanished–and the very real threats that still remain.

Julia Heaberlin was a  journalist for more than twenty years for such newspapers at the Fort Worth Star-Telegram and The Detroit News.  Playing Dead is her first novel.  She lives with her family in Texas, where she is at work on her second book, Lie Still, to be published by Bantam Books.
Connect with Julia on her website juliaheaberlin.com.


Tommie McCloud has her life turned upside down upon the death of her beloved father. It starts with a letter from a mildly crazy woman – the wife of an imprisoned mobster – who is claiming that Tommie is her daughter. A daughter kidnapped many years ago and never found.  As Tommie investigates the letter and her parents’ pasts she finds out information that is probably better off staying buried.


I’m a bit torn with this book. The premise held so much promise and the secrets revealed throughout provided some wild twists and turns yet the storytelling did not live up to the promise. The heroine was at turns a noiresque broad who could stand up to anyone and anything. A woman who could shoot any gun, any time and ask questions later. And at other times she was a weepy pile of mush. The two personalities just didn’t seem to belong within the same woman and I was left conflicted.


Tommie’s reactions in certain situations were assured and as if she were in law enforcement and in others just like the psychology student she purported to be. She was of course rich and beautiful to boot. She was if I had to choose one word, implausible.


The plot points were very good and this is a hard review to write without spoiling the story as so much of it is wrapped in secrets I don’t want to spill. So – I liked the story but not the heroine. Weird but true.


You can purchase Playing Dead on Amazon.com


One lucky reader will win a copy of Playing Dead! How do you win? It’s easy! Just jump on the Rafflecopter. Good luck!

Disclosure:  I received a copy of Playing Dead from TLC Book Tours. Any opinions expressed are my honest opinions and were not impacted by my receipt of the free book. I received no monetary compensation for this post.