The Postwoman by Michael Kenneth Smith – Book Spotlight with a Giveaway

I want to share a new book with you today. If it wasn’t for the fact that I overdosed on WWI and WWII novels I’d be reviewing it for you. Even though I just can’t go there myself I still want to let you know about books with powerful story lines that are available. The Postwoman is just such a book. 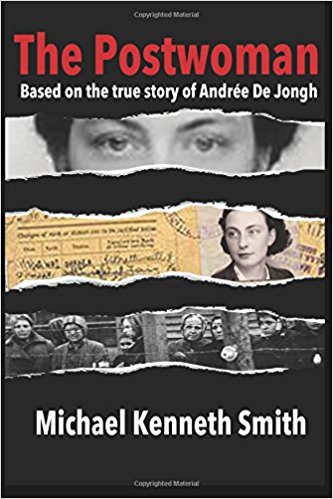 In 1940, Andrée “Dedee” de Jongh, a twenty-four-year-old Belgian nurse, is horrified by her country’s quick surrender to Nazi Germany. Every week she observes Germans inspecting the infirmary for injured Allied soldiers to ship off to work camps. Every day she witnesses new atrocities in the streets, such as Jewish countrymen being brutally beaten.

Outraged at the injustice, Dedee devises a strategy with her father to aid in the resistance effort against the Germans. They hatch a plan to help downed Royal Air Force fliers escape Belgium and France and return to England, where they can rejoin the fight. It’s a dangerous endeavor and guaranteed death sentence if they’re caught, but Dedee is determined to do her part to defeat the enemy.

Over time, the secret organization becomes one of the most successful wartime escape lines, saving more than eight hundred Allied fliers. Dedee manages to outwit the Nazis for a time, but with German soldiers hunting for the group and its leaders at every turn, will she be able to escape with her life?

Based on true events, The Postwoman recounts the gripping story of one woman’s courageous actions and sacrifices in the face of great peril.

For Michael Kenneth Smith, writing has been a lifelong passion. The Postwoman is his third historical novel. He has also authored two novels about the Civil War: Home Again and Scarred.

Smith was a trained mechanical engineer and had a successful career in the auto parts industry. In 2000, he sold his business and retired. Since then, Smith has enjoyed numerous pursuits, including fishing, golfing, cooking, playing bridge, and becoming a wine connoisseur. He has also found time to edit for his local newspaper.

One lucky US reader will win a copy of The Postwoman. Just enter as many ways as you would like on the Gleam widget below. Full rules are on the widget. Good luck everyone.
Michael Kenneth Smith