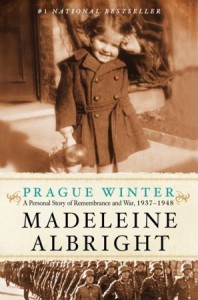 Paperback: 480 pages
Publisher: Harper Perennial (February 19, 2013)
Before Madeleine Albright turned twelve, her life was shaken by the Nazi invasion of her native Prague, the Battle of Britain, the near-total destruction of European Jewry, the Allied victory in World War II, the rise of communism, and the onset of the Cold War. Drawing on her memory, her parents’ written reflections, interviews with contemporaries, and newly available documents, Albright recounts a tale that is by turns harrowing and inspiring.
In Prague Winter, Albright reflects on her discovery of her family’s Jewish heritage many decades after the war, on her Czech homeland’s tangled history, and on the stark moral choices faced by her parents and their generation. At once a deeply personal memoir and an incisive work of history,Prague Winter serves as a guide to the future through the lessons of the past—as seen through the eyes of one of the international community’s most respected and fascinating figures.

Madeleine Albright served as America’s sixty-fourth secretary of state from 1997 to 2001. Her distinguished career also includes positions on Capitol Hill, on the National Security Council, and as U.S. ambassador to the United Nations. She is a resident of Washington, D.C., and Virginia.

This book was not what I was expecting. It was less a story of Mrs. Albright’s memories during the events of WWII in her birth country of Czechoslovakia then it was the story of her father’s experiences as a diplomat for the country before, during and after the War. It was, despite the slightly misleading subtitle very, very hard to put down.

I must admit up front to an appalling lack of knowledge of Czechoslovakian history. This despite my mother’s family coming from an area bordering Poland and what is now Slovakia. I have basic knowledge of WWII history and how it impacted Czechoslovakia but this book gave me an insider’s knowledge without reading like a textbook. In fact I completely forgot I was reading non-fiction as I tore through this book.

I found the narrative to be engrossing; the combination of the author’s passion for the topic combined with the family remembrances made for a book that read like fiction. The historical figures of the time – and the Czech people –  were brought to life and I felt, in quite a few cases as if I was right there as the horrible history of WWII played out.

It’s a book both intimate and expansive. It invites you into Mrs. Albright’s family history and introduces the reader to the 20th century leaders of a small but pivotal country in Eastern Europe. I can’t say it was an easy book to read – what book about WWII is – but I am so very glad I read it.

You can see the Prague Winter Tour Schedule

You can purchase Prague Winter on Amazon.com

Disclosure:  I was sent a free copy of Prague Winter by TLC Book Tours for my honest review. I received no compensation for this post.