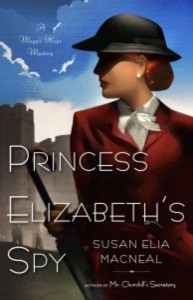 Susan Elia MacNeal introduced the remarkable Maggie Hope in her acclaimed debut, Mr. Churchill’s Secretary. Now Maggie returns to protect Britain’s beloved royals against an international plot—one that could change the course of history.
As World War II sweeps the continent and England steels itself against German attack, Maggie Hope, former secretary to Prime Minister Winston Churchill, completes her training to become a spy for MI-5. Spirited, strong-willed, and possessing one of the sharpest minds in government for mathematics and code-breaking, she fully expects to be sent abroad to gather intelligence for the British front. Instead, to her great disappointment, she is dispatched to go undercover at Windsor Castle, where she will tutor the young Princess Elizabeth in math. Yet castle life quickly proves more dangerous—and deadly—than Maggie ever expected. The upstairs-downstairs world at Windsor is thrown into disarray by a shocking murder, which draws Maggie into a vast conspiracy that places the entire royal family in peril. And as she races to save England from a most disturbing fate, Maggie realizes that a quick wit is her best defense, and that the smallest clues can unravel the biggest secrets, even within her own family.

Susan Elia MacNeal is the author of the Maggie Hope mystery series, including her debut novel,Mr. Churchill’s Secretary, Princess Elizabeth’s Spy, and the upcoming Hitler’s Nightingale. She lives in Brooklyn, New York, with her husband and child.
For more information about Susan and her work, visit her website at SusanEliaMacNeal.com.

This is the second book in a series, the first being Mr. Churchill’s Secretary. I had the good fortune to have read that first book but don’t feel you have to read both to enjoy Princess Elizabeth’s Spy. It stands alone quite nicely. In fact it had been quite a while since I had read the first book and I could honestly say that I didn’t recall much anyway.

Maggie Hope is a very intelligent young woman who after saving Winston Churchill’s life is sent off to spy school so she can further help the war effort. While her mind is very well developed she has some problems with the rigorous physical demands of the school. She does not pass with flying colors as she expected but her old boss still has a task that will utilize her skills. There has been a threat against young Princess Elizabeth so Maggie will be placed at Windsor castle as a tutor to keep an eye on her and to see if she can figure out who the traitor at the palace might be.

Maggie moves to ingratiate herself into the royal household and learn as much about the people within. It’s not easy as there is a certain reserve and distrust at first and her prejudices do her no favors. She is also dealing with some earth shattering personal problems that don’t help her concentration.

This was a light and breezy read if such can be said of a book that takes place during WWII. There is a lot of action and suspense that really doesn’t let up much in the reading. That being said there isn’t a lot of depth. This is not a book if you are looking for true historical record or anything close to a reality based book. It is a book if you are looking to be entertained with a fast moving plot and enjoyable characters who find themselves in crazy situations and yet manage to MacGyver their way out. Despite its implausibilities I liked this tale of Maggie Hope and her efforts to save the young Princess Elizabeth.

You can see the rest of the Tour Schedule

You can purchase Princess Elizabeth’s Spy on Amazon.com

One lucky reader will win a copy of Princess Elizabeth’s Spy. How do you win? It’s easy! Just hop on the Rafflecopter. Good luck everyone!

Disclosure:  I received a copy of Princess Elizabeth’s Spy from TLC Book Tours gratis. Any opinions expressed are my honest opinions and were not impacted by my receipt of the free book. I received no monetary compensation for this post.