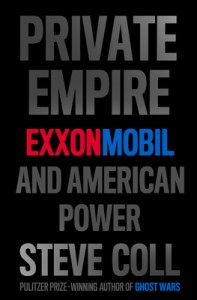 • Hardcover: 704 pages
• Publisher: The Penguin Press (May 1, 2012)
Two-time Pulitzer Prize winner Steve Coll goes deep inside ExxonMobil Corp, the largest and most powerful private corporation in the United States
In Private Empire, Steve Coll investigates the notoriously secretive ExxonMobil Corporation, revealing the true extent of its power. ExxonMobil’s annual revenues are larger than the economic activity in the great majority of countries, equivalent to the GDP of Norway. In many of the countries where it conducts business, ExxonMobil’s sway over politics and security is greater than that of the United States embassy. In Washington, ExxonMobil spends more money lobbying Congress and the White House than any other corporation. Yet despite its outsized influence, it is a black box.
Private Empire begins with the Exxon Valdez accident in 1989 and closes with the Deepwater Horizon oil spill in the Gulf of Mexico in 2010. The narrative spans the globe, taking readers to Moscow, impoverished African capitals, Indonesia, and elsewhere in heart- stopping scenes that feature kidnapping cases, civil wars, and high- stakes struggles at the Kremlin. At home, Coll goes inside ExxonMobil’s K Street office and corporation headquarters in Irving, Texas, where top executives in the “God Pod” (as employees call it) oversee an extraordinary corporate culture of discipline and secrecy.
The action is driven by larger than life characters, including corporate legend Lee “Iron Ass” Raymond, ExxonMobil’s chief executive until 2005. A close friend of Dick Cheney’s, Raymond was both the most successful and effective oil executive of his era and an unabashed skeptic about climate change and government in all its aspects. The larger cast includes Raymond’s successor, Rex Tillerson, who broke with Raymond and tried to reset ExxonMobil’s public image; as well as the countless world leaders, plutocrats, dictators, guerrillas, and corporate scientists who are part of ExxonMobil’s colossal story.
The first hard-hitting examination of ExxonMobil, Private Empire is the masterful result of Steve Coll’s indefatigable reporting. He draws here on more than four hundred interviews; field reporting from the halls of Congress to the oil-laden swamps of the Niger Delta; more than one thousand pages of previously classified U.S. documents obtained under the Freedom of Information Act; heretofore unexamined court records; and many other sources. A penetrating, newsbreaking study, Private Empire will be the definitive portrait of ExxonMobil.


Steve Coll, winner of a 2005 Pulitzer Prize for non-fiction for Ghost Warsand 1990 Pulitzer for explanatory journalism, is president of New America Foundation, and a contributor at The New Yorker magazine. Previously he spent 20 years as a foreign correspondent and senior editor at The Washington Post, serving as the paper’s managing editor from 1998 to 2004. He is the author of seven books, including The Deal of the Century: The Break Up of AT&T (1986);The Taking of Getty Oil (1987); Eagle on the Street, based on the Pulitzer Prize-winning account of the SEC’s battle with Wall Street (with David A. Vise, 1991); On the Grand Trunk Road: A Journey into South Asia (1994); Ghost Wars: The Secret History of the CIA, Afghanistan and Bin Laden, from the Soviet Invasion to September 10, 2001 (2004); The Bin Ladens: An Arabian Family in the American Century (2008); and Private Empire: Exxon Mobil and American Power (2012).


This was a door stopper of a book. I haven’t had a real hefty book for a bit and it was a real delight to sit and hold a real solid book again. And what a book it was. Starting with the the Exxon Valdez spill and book-ending with the Deepwater Horizon disaster Private Empire details the arrogance that is ExxonMobil.


Mr. Coll’s writing style is easy even when explaining oil extraction methods or the geopolitics of oil and natural gas rights. It reads almost like a suspense novel except that it’s all true. And that is what makes it so scary. I found myself turning page after page reeling at my naivete. I think I want to go back to being uninformed. It’s a happier state of mind.


Mr. Coll’s research for the book was quite extensive and the book is heavily footnoted. He conducted over 400 interviews with people great and small and he weaves what they shared together with facts gathered from all over the world to take the reader on a ride from oil fields to the offices of political power in this country and beyond. It was utterly fascinating to get a peak inside the Borg like culture of Exxon. Tow the company line or find another job.


I have not enjoyed a non fiction book this much in a long, long time. I just wish I wasn’t so surprised at what I learned.


You can purchase Private Empire at Amazon.com

Disclosure:  I received a copy of Private Empire gratis from TLC Book Tours. Any opinions expressed are my honest opinions and were not impacted by my receipt of the free book. I received no monetary compensation for this post.