I didn’t know what to expect from Promise by Minrose Gwin but what I got was one of the best reads of this year. I thank TLC Book Tours for sending me a copy at no charge for my honest review. 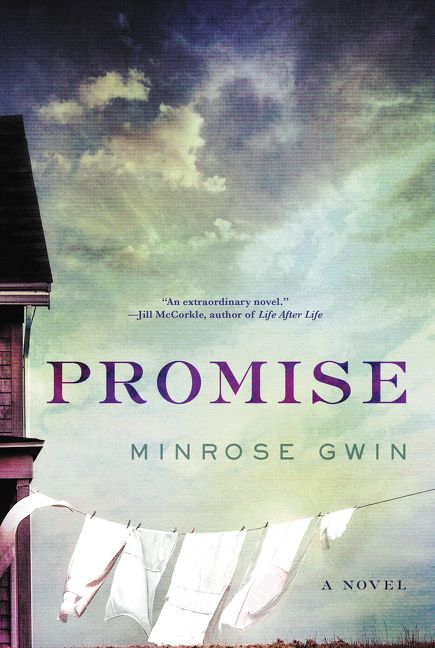 In the aftermath of a devastating tornado that rips through the town of Tupelo, Mississippi, at the height of the Great Depression, two women worlds apart—one black, one white; one a great-grandmother, the other a teenager—fight for their families’ survival in this lyrical and powerful novel

“Gwin’s gift shines in the complexity of her characters and their fraught relationships with each other, their capacity for courage and hope, coupled with their passion for justice.” — Jonis Agee, bestselling author of The River Wife

A few minutes after 9 p.m. on Palm Sunday, April 5, 1936, a massive funnel cloud flashing a giant fireball and roaring like a runaway train careened into the thriving cotton-mill town of Tupelo, Mississippi, killing more than 200 people, not counting an unknown number of black citizens, one-third of Tupelo’s population, who were not included in the official casualty figures.

When the tornado hits, Dovey, a local laundress, is flung by the terrifying winds into a nearby lake. Bruised and nearly drowned, she makes her way across Tupelo to find her small family—her hardworking husband, Virgil, her clever sixteen-year-old granddaughter, Dreama, and Promise, Dreama’s beautiful light-skinned three-month-old son.

Slowly navigating the broken streets of Tupelo, Dovey stops at the house of the despised McNabb family. Inside, she discovers that the tornado has spared no one, including Jo, the McNabbs’ dutiful teenage daughter, who has suffered a terrible head wound. When Jo later discovers a baby in the wreckage, she is certain that she’s found her baby brother, Tommy, and vows to protect him.

During the harrowing hours and days of the chaos that follows, Jo and Dovey will struggle to navigate a landscape of disaster and to battle both the demons and the history that link and haunt them. Drawing on historical events, Minrose Gwin beautifully imagines natural and human destruction in the deep South of the 1930s through the experiences of two remarkable women whose lives are indelibly connected by forces beyond their control. A story of loss, hope, despair, grit, courage, and race, Promise reminds us of the transformative power and promise that come from confronting our most troubled relations with one another.

Minrose Gwin is the author of The Queen of Palmyra. She has written three scholarly books, coedited The Literature of the American South, and teaches contemporary fiction at the University of North Carolina–Chapel Hill.

I have a love of historical fiction and a fascination with weather so this book caught me on two levels. Promise is a fictional tale about the very real F5 tornado that hit Tupelo, Mississippi, in 1936. Ms. Gwin’s grandparents lived in the area at the time and survived the event. She includes a slew of photos in the afterward from the news coverage of the day and from the historical society that allows the reader to fully appreciate the fury of the storm.

The book focuses on two families; one wealthy and white and one poor and black. The white family includes the Judge, his wife, son and daughter Jo. The black family story is centered on Dovey the matriarch but it also features her husband, grandaughter and great grandson who is the book’s namesake. Dovey is the laundress in town and she works for the Judge’s family. It’s a tortured history for a number of reasons. I don’t want to delve into too deeply for the sake of not spoiling plot points.

This is a book that forces you to think and to read slowly. It doesn’t read like a typical book and it some ways it’s a bit scattered but these peoples’ world was just blown apart by winds that probably reached over 250mph. The book takes place right after the Depression so race relations place a big role in the story. For example – as Dovey is searching for her family after the tornado she is directed to a certain area but she is warned that no one is writing down the names of  “the coloreds” nor are they counting the number of colored dead.

Just think about that for a minute. The black people that died LITERALLY didn’t count. To this day they do not have an accurate death toll due to this.

White women do not fare much better in the tale. Their purpose seems to be to satisfy the needs and wants of white men. Aaaaah, the good ‘ole days. As I noted, it’s a thought provoking books and some thoughts provoke more than others.

I found that the mood was set from the first page and Ms. Gwin carried the mood through the to last page. I can’t say that all of my questions were satisfactorily answered but I don’t think they were meant to be. This was a time that just was not fair to people of color or to women for that matter. I was left with a semblance of hope for the future for the characters which is what a reader wants when they become as invested in them as you do with a book as compelling as this one is. I find myself still thinking about it well over a week after I finished it. Ms. Gwin built her world well and populated it with memorable characters. I can’t wait to read what she writes next.