One thing I love about reviewing books is being introduced to new authors. Thanks to TLC Book Tours I have a new favorite author in Jennifer Estep. I thank them for sending me Protect the Prince at no charge for my honest review. 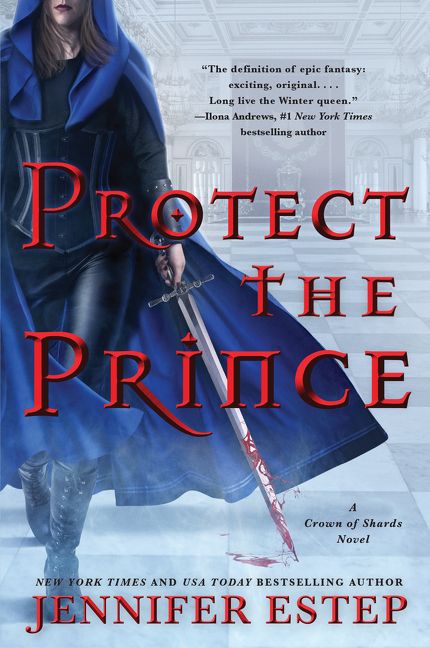 About Protect the Prince:

Everleigh Blair might be the new gladiator queen of Bellona, but her problems are far from over.

First, Evie has to deal with a court full of arrogant, demanding nobles, all of whom want to get their greedy hands on her crown. As if that wasn’t bad enough, an assassin tries to kill Evie in her own throne room.

Despite the dangers, Evie goes ahead with a scheduled trip to the neighboring kingdom of Andvari in order to secure a desperately needed alliance. But complicating matters is the stubborn Andvarian king, who wants to punish Evie for the deaths of his countrymen during the Seven Spire massacre.

Dark forces are also at work inside the Andvarian palace, and Evie soon realizes that no one is safe. Worse, her immunity to magic starts acting in strange, unexpected ways, which makes Evie wonder whether she is truly strong enough to be a Winter Queen.

Evie’s magic, life, and crown aren’t the only things in danger—so is her heart, thanks to Lucas Sullivan, the Andvarian king’s bastard son and Evie’s … well, Evie isn’t quite sure what Sullivan is to her.

Protect the Prince is available at Harper Collins

Jennifer Estep is a New York Times, USA Today, and internationally bestselling author who prowls the streets of her imagination in search of her next fantasy idea.

Protect the Prince is the second book in the Crown of Shards trilogy. I read the first book, Kill the Queen and was utterly enthralled. The world Ms. Estep created was full of the everyday and yet it was fantastical and magical at the same time. Her characters are memorable and deal with things like love and betrayal while fighting in gladiator battles and dealing with levels of magical powers.

Protect the Prince picks up where the Kill the Queen left off. Everleigh is queen but not everyone is happy about it, nor do her nobles particularly feel she is up to the job. She isn’t sure she is up to the job but knows she has to be. But there are forces that don’t want her to succeed for reasons she does not yet understand.

What Everleigh does have is a strong group of supporters in her friends from her gladiator troupe. They have her back and are there to protect and support her. Her first mission is to try and fix the relationship with the neighboring kingdom. Things don’t go quite as she hopes for many different reasons.

This second book in the series was just as exciting as the first book. It was a page turning read that had me on the edge of my seat more times than I care to mention. Everleigh is growing as a character and she is coming into her own as a young woman and as a queen. Ms. Estep keeps a solid balance between the lighthearted moments and the suspense. The romance elements do not supersede the overarching story. All in all a great read and I can’t wait for the finale.

Read my review of Kill the Queen