I am excited to announce that Pulitzer Prize winning author Glenn Frankel is coming to Montana for a book tour in support of his new book, High Noon: The Hollywood Blacklist and the Making of an American Classic from March 28 – 31, 2017.

He will be making stops as follows:

I will be heading to Helena to hear Mr. Frankel speak and I will be interviewing him as well. I will share my thoughts after my trip. I am also reading High Noon and will have a review of the book for you when I am done. 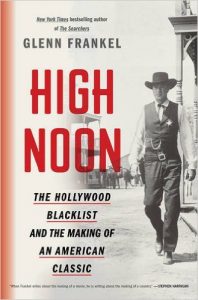 From the New York Times-bestselling author of The Searchers, the revelatory story behind the classic movie High Noon and the toxic political climate in which it was created.

It’s one of the most revered movies of Hollywood’s golden era. Starring screen legend Gary Cooper and Grace Kelly in her first significant film role, High Noon was shot on a lean budget over just thirty-two days but achieved instant box-office and critical success. It won four Academy Awards in 1953, including a best actor win for Cooper. And it became a cultural touchstone, often cited by politicians as a favorite film, celebrating moral fortitude.

Yet what has been often overlooked is that High Noon was made during the height of the Hollywood blacklist, a time of political inquisition and personal betrayal. In the middle of the film shoot, screenwriter Carl Foreman was forced to testify before the House Committee on Un-American Activities about his former membership in the Communist Party. Refusing to name names, he was eventually blacklisted and fled the United States. (His co-authored screenplay for another classic, The Bridge on the River Kwai, went uncredited in 1957.) Examined in light of Foreman’s testimony, High Noon‘s emphasis on courage and loyalty takes on deeper meaning and importance.

In this book, Pulitzer Prize-winning journalist Glenn Frankel tells the story of the making of a great American Western, exploring how Carl Foreman’s concept of High Noon evolved from idea to first draft to final script, taking on allegorical weight. Both the classic film and its turbulent political times emerge newly illuminated.

Glenn Frankel is an author and journalist, based in Arlington Virginia. His most recent position was director of the School of Journalism and G.B. Dealey Regents Professor at the University of Texas at Austin, and he also spent four years as a visiting journalism professor at Stanford University. He was a longtime Washington Post reporter, editor and bureau chief in London, Southern Africa and Jerusalem, where he won the 1989 Pulitzer Prize for International Reporting for “balanced and sensitive reporting” of Israel and the first Palestinian uprising. He also served as editor of the  Washington Post Magazine. His first book, Beyond the Promised Land: Jews and Arabs on the Hard Road to a New Israel, won the National Jewish Book Award. His second, Rivonia’s Children: Three Families and the Cost of Conscience in White South Africa, was a finalist for the Alan Paton Award, South Africa’s most prestigious literary prize. His latest, The Searchers: The Making of an American Legend, published by Bloomsbury, was a New York Times and Los Angeles Times  bestseller and a Library Journal Top Ten book for 2013.  His new book project explores the Hollywood blacklist and the making of the classic western High Noon and will be published in February 2017.

You can find Mr. Frankel’s full Book Tour Schedule including stops in

Any purchase links are affiliate links which means if you buy through one I make a small commission which helps to keep the Farm cats in toys and treats.