I am very pleased to welcome Daniel Maunz today with an exclusive Guest Post in support of his new book, Questions of Perspective, now on tour with TLC Book Tours. Please read on to learn about the book and then enjoy the guest post. 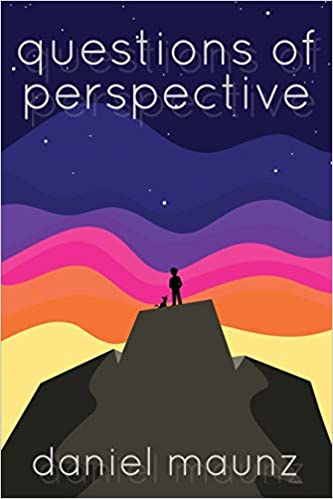 About Questions of Perspective:

After his only friend and colleague, John Manta, disappears without a word, Dave Randall further entrenches himself in the humdrum life of an unenthusiastic lawyer. But once he begins to understand what happened, he embarks on a journey to uncover the deeper meanings and implications of John’s fate.

Accompanied by Peaches the cat, Dave uproots his life and reinvents himself in the midst of his search. Along the way, he is haunted by his piecemeal understanding of John’s fate and what it means for his existence. Little does Dave know, his journey of self-discovery will have ramifications that extend far beyond the borders of his own little life.

When he is not writing, Daniel Maunz serves as in-house counsel for a major insurance company. He currently lives in Sullivan’s Island, South Carolina, with his wife Lynne, their son Patrick, and their two cats: Admiral Meowy McWhiskers and Captain Cutie (or “Admiral” and “Captain” for short). Questions of Perspective is his first novel.

I have no memory of the first book I ever read, but I clearly remember the first adult book that I conquered—Watchers by Dean Koontz, in sixth grade.
I am, admittedly, using “adult” in a very shallow sense. I was assigned Journey to the Center of the Earth as a reading assignment in fifth grade, which is not a childish book based on my recollection, and I certainly would not begrudge any adult for reading the works of Sheldon Silverstein (which I snatched from my elementary school library whenever they were miraculously available).
No—by “adult,” I am talking about a novel with all of the grown up stuff that we now take for granted in books: Murder. Sex. Horror. And also, in the case of Watchers, a really, really smart dog named Einstein.
If you have not read it (and you should—I reread Watchers a few years ago and it definitely holds up), Watchers is the story of a golden retriever whose intelligence reaches genius levels after being subjected to some government-sponsored science experiments. After the dog escapes the government facility where he was being held, he befriends a man named Travis Cornell. Travis has largely given up on life at the outset of the story, but Einstein helps him (and later, a lonely woman named Nora) regain a sense of meaning and purpose. I am not giving much away; there’s lots of other stuff going on involving a monster, a professional killer, and a government search for its missing science experiments. But as a kid (and now, as an adult), what I loved most about Watchers was the dog, Einstein.
As a teen, I reread the book over and over again until the binding fell apart. I soon began skipping over chapters just to get to the next section with Einstein. Einstein was wonderful because even though he had a very strong personality in his own right, he was also very much a dog. This wasn’t some character that spoke and acted as a human would, but just happened to be in the shape of a lovable animal. Einstein was, first and foremost, a dog, which included all of the wonderful characteristics dogs have to offer. Just one whose intelligence was cranked up to eleven.
As I grew older, fictional animals whose stature rose to that of an actual character in the story became something I often cherished … and also feared. A man and a woman being chased by a monster through the woods is scary—sure. But if they also have their dog with them … I am sweating bullets as I read through that chapter.
I’ve occasionally been tricked into reading stories where a lovable animal companion ends up suffering harm. As much as I detest spoilers, I often wish that books (and movies) came with some sort of certification confirming that any animal characters introduced during the course of the story come out of it none the worse for wear.
Which brings me to the novel I wrote, entitled Questions of Perspective. It features a cat named Peaches, who is just as pivotal a character in the story as any of the human characters. If you need proof in that regard, Peaches even made his way onto the cover of the book! For reasons I will not spoil here, Peaches largely embodies the maximum potential of what a cat in our world can hope to attain. Although he is not, as measured by human standards, a genius like Einstein the dog was in Watchers, I worked hard to ensure that his cat-centric personality had plenty of room to shine. So, for example, when Peaches decides to wake up his owner, it is not with a delicate “meow.” Based on my own years of experience with my own cats, Peaches’ wake up call takes the form of stomping on his sleeping companion’s throat.
It is not all that surprising that Peaches ended up being a pivotal character in Questions of Perspective. As noted, I’ve always cherished a story with a realistic portrayal of a pet, where his or her personality is on full display. Also, over the course of two years, I largely wrote this novel at night (after my wife had gone to bed), where my two cats (Admiral and Captain) kept me company by taking turns prancing across my keyboard in a desperate attempt to annoy me enough to feed them yet another meal. Thus, as I was typing away, word by word, cats were never that far from my mind.
The nature of the story itself also begged, in my opinion, for the inclusion of a cat. It is, at its essence, the story of two introverts trying to find their respective places in the universe. Maybe this is just an unfortunate stereotype, but I have always seen cats as being something of a spirit animal for introverted personalities. I’m an introvert myself, and I love cats, so there appears to be at least some kernel of truth to that tired cliche. Enough of a kernel, at least, for me to make sure that the feline population was adequately represented in the story.
I had mentioned earlier wishing that books came with a warning label identifying the ultimate fate of any animal characters contained within them. Maybe you are different from me in this regard, and if there is a chance you may read Questions of Perspective one day and don’t want to be spoiled in any sense of the word, you should probably stop reading this now.
But for those who are like me, and appreciate some pre-reading reassurances when it comes to fictional pets, let me just say this:
There is a cute cat in Questions of Perspective with the name of Peaches.
And he is doing just dandy by the end of the book.
Thank you to Books, Cooks, Looks for inviting me to submit this guest post.

One lucky US reader will win a copy of A Question of Perspective. Just enter as many ways as you would like on the Gleam widget below. Good luck everyone.
Daniel Maunz